What We Keep Reader’s Guide 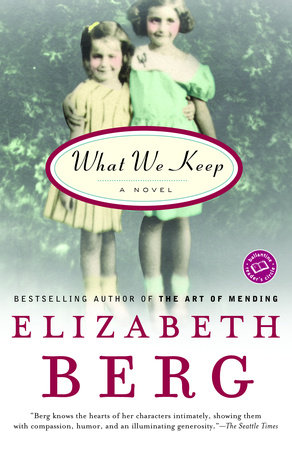 What We Keep Reader’s Guide

print
What We Keep Reader’s Guide

"[T]he poignant twists of rejection and eventual redemption will pull you along at full throttle, making you happy you stayed for the tear-jerking, life-affirming finale."
—Detroit Free Press

"[Berg] appeals with her exceptional renditions of compelling and sensitive situations laced with humor, compassion, and tenderness. Her latest novel, What We Keep, fulfills the loftiest expectations as she once again offers a heartrending tale both wise and worthy."
—Rocky Mountain News

"[A] novel ringing with truth about women’s lives."
—Arts Around Boston

"Berg’s sixth novel shows the price of not telling children the whole truth, of leaving out the most complicated details, the ones we keep secret to protect them–and to protect ourselves….It also shows what is purchased when complete honesty is the currency: Freedom for every person involved."
—Times Picayune

"What We Keep, Elizabeth Berg’s beautifully written new novel, is about ties that are buried but not broken, wounds that are dressed but never heal, and love that changes form but somehow survives."
—USA Today

"[A] small book with a huge heart."
—Newsday

"Elizabeth Berg…masterfully brings us back to childhood, allowing us entry into its joys and asking us…to face its almost unbearable pain….Berg knows the hearts of her characters intimately, showing them with compassion, humor and an illuminating generosity."
—The Seattle Times

"Emotional truth is at the heart of every one of Berg’s novels. She is less concerned with the swirling world outside as how we relate with each other….Her observations in this novel, as in her others, are keen, candid, and intimate."
—Middlesex News

1. Ginny possesses an extraordinary memory. In fact, she suggests that, through memory, "I become again the person I was then" (page 10) and thus captures a "true vision of the past" (page 11). What is a "true vision of the past"? Is it Ginny’s twelve-year-old vision? Is it her adult vision? Does Ginny’s effort to remember the past cause her to think about it differently?

3. Martha notes that people like "differentness" (page 26) in everything except their mothers. What does Martha mean? Do you agree?

5. When Sharla dreams that Marion has a third eye, Ginny expects that Marion will comfort Sharla: "Never mind the dream; no matter what it was, she would take it away" (page 105). Why is this dream so startling? Is Marion able to comfort her daughter? Why or why not?

6. Knowing, in retrospect, that neither she nor Sharla knew Marion as well as they thought, Ginny feels that her mother should have attempted to communicate with them that summer: "To say something about what she must have been thinking" (page 85). However, the narrative is full of moments in which Marion tries to tell her daughters about herself only to be interrupted or ignored. Stories of past boyfriends (page 66) and hints of Marion’s own desires (page 89) are constantly squelched by Ginny and Sharla’s demands. Why didn’t the daughters listen? Why couldn’t Marion communicate with her daughters successfully?

7. After her first long absence, Marion tries to tell her daughters about her experience. From the moment of its "odd beginning" (page 209), it’s a story Ginny doesn’t like. Marion isn’t, Ginny suggests, a very good storyteller: "She would make up stories that were not very good, as this one was not" (page 211). Finally, Ginny interrupts her mother’s story for another: "’I have so much history,’ I said. ‘My teacher, Mr. Stoltz, he’s nuts. He thinks all we have in our lives is history’" (page 214). Why is the word "history" emphasized in this way? What does Marion’s story have to do with Ginny’s "history"? Why does Ginny think her mother is a bad storyteller? What do you think of Marion’s storytelling?

8. What We Keep is full of descriptions of houses. Ginny and Sharla sneak through Mrs. O’Donnell’s dusty, empty rooms, and rifle through Jasmine’s drawers. Both daughters are aware of Marion’s "house folder" (page 87), and offer opinions about her furniture rearrangements (page 88), her Clear Falls apartment (page 225), and her California home (page 259). What is the significance of these spaces?

9. Marion appears to be the typical 1950s housekeeper–at ease in an apron, involved in the weekly neighborhood coffee klatch, a willing Tupperware party hostess. However, she seems to transform the ordinary meaning of even these events. For instance, why does Marion host a Tupperware party on her birthday? Why are her daughters so startled by this decision? What significance does her action have in their minds? In her own mind? In yours?

12. Sharla says that her painting "doesn’t make any sense" (page 245), but the image of the bird certainly has meaning for Marion. Ginny realizes during her own flight to meet her mother that Marion freed the family parakeet, Lucky, during that summer (page 141). Ginny also remembers the moment in which she and Wayne witnessed Marion "flapping her arms like wings, and walking about in circles" (page 153), as well as the afternoon during which her Parents constructed collages with wings and airplanes. What meaning did these images hold for Marion?

13. Our earliest introduction to Ginny’s father comes through her memories of him. How do you feel about Steven? Does Marion’s story alter your feelings about him? Consider Steven’s defense of Marion’s absence: "I believe she thinks she has reasons" (page 241). Consider his silence when confronted with Sharla’s conviction of her mother’s lesbianism: "’What did he say?’ I asked, and Sharla said, ‘Nothing. He must have known’" (page 246). Do you think that his statement and his silence are defensible or not? Do you think he’s a good father?

14. Wayne is the only other significant man in Ginny’s life that summer. While Ginny feels a constant affection for her father, her feelings toward Wayne are rather ambivalent. She doesn’t want her relationship with Wayne reduced to a "that-summer-at-the-lake story," but suggests herself that she was acting out of a "pied-piper delirium" (page 165). Why does she describe her relationship with Wayne so ambivalently? Why is she relieved when he leaves so suddenly?

17. The climax of the novel–the meeting of Ginny and her mother–is, in fact, not written. The women come face to face and, suddenly, the text stops. Ginny can’t speak. Marion begins "saying syllables that are not words" (page 254). Why is this moment in the novel not written?

18. Marion confesses misgivings about her mothering while sitting on Ginny’s bed: "I think I’ve raised you so wrong…. I did something wrong. I did everything wrong, and I’m sorry" (page 187). Do you think Marion’s mothering was "wrong"? If so, was her choice to leave "right"?

19. Ginny is clearly aware of the impact that Marion’s actions have had upon her own mothering. Has Ginny learned from Marion’s errors? Do you consider Ginny to be a good mother?

20. Ginny herself asks the novel’s most pressing questions: "I am wondering what it is that we ask of our mothers: what do they owe us? What is it that we owe them?" (page 270) How does she answer these questions? How do you answer them?

21. At the beginning of the novel Ginny acknowledges her love of science: "I would stare at formulas and admire them for their spare beauty without being able to grasp their meaning. The fact that they cleanly explained some higher law to someone else was enough for me. It comforted me" (page 14). At the end of the novel, Marion makes a similar confession: "I would read something like the first law of thermodynamics, and just find it enormously comforting. I still do" (page 261). What is it about science that comforts Ginny? Marion?

22. Why is the novel titled What We Keep? What is it that Ginny "keeps" from her experience?

Elizabeth Berg received the New England Booksellers Association Award for fiction in 1997. She is the author of six critically acclaimed novels. Durable Goods, which Richard Bausch called "a gem," was followed by bestsellers Talk Before Sleep (an ABBY honor book), Range of Motion, The Pull of the Moon, Joy School, and What We Keep. She has published fiction and nonfiction in Good Housekeeping, Ladies’ Home Journal, The New York Times Magazine, Reader’s Digest, Parents, and New Woman. She is the author of Family Traditions: Celebrations for Holidays and Everyday. Berg is the mother of two daughters. When she is not writing, she spends time learning the names of the plants growing in her garden and fingering the fabrics that will become pieces of her quilts. Berg lives in Massachusetts.
Learn More About What We Keep
print
Back to Top