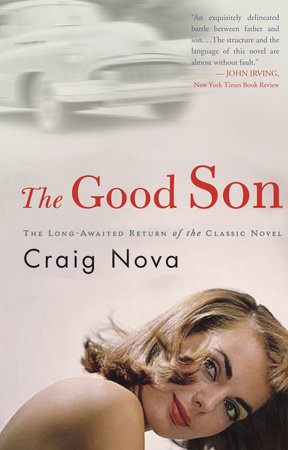 Pop Mackinnon is a successful New York lawyer with a home in Manhattan, but he is most truly in his element on “his land,” the country farm he shares with his wife and his son, Chip. Pop reigns over his physical domain and his family, taking his daily rituals with a sense of entitlement and pleasure. Just as deliberately and with the same assuredness, Pop plots a course for his son who, for the most part, loyally obliges his father—but with just enough confrontation to keep Pop contentedly sparring. The father-son relationship largely disregards Mrs. Mackinnon, who quietly studies the wildlife outside to distract from the solitude of her marriage and her exclusion from Chip’s and Pop’s world. When Chip follows Pop’s wishes to become engaged to the well-bred and gracious Carolyn, Mrs. Mackinnon suspects that even that relationship is colored by Chip’s and Pop’s secret agreements. But the seemingly impenetrable (if combative) filial relationship is threatened with the arrival of the dangerously alluring Jean Cooper. It is Jean who diverts Chip from his role as the “good son,” and it is Chip’s lust for her that forces him to stand on his own and fight for his independence. Jean’s eventual departure is accompanied by literal destruction as well as heartache. However, Chip and Pop are able to reconcile over a contract that forces Pop to yield in a small way to Chip and leads Chip to the altar with the charming and forgiving Carolyn.

1. When Wade defies Pop to bring supplies to Chip in the stone house, Pop wants to know why Wade is willing to take such a risk to help Chip. Wade explains simply that Chip used to go with him to the movies, and that he “appreciated it.” Why, as a child, was his friendship with Chip so important to Wade?

2. Mrs. Mackinnon, though a relatively quiet character, contributes a significant portion of the text in the novel through Mrs. Mackinnon’s Book of Animals, Reptiles, Plants, Trees, Birds, Bugs, and Flowers. What do these sections say about her character and her role in her family? Discuss the narrative progression that takes us from her admiration of the graceful mayflies (and her admission “I am not a pretty woman”) to her disgust for crows and melancholy observation of the noncommunicative bears.

3. Jean and Chip are separately faced with threats they must stare down to defeat: Jean with her taunting invitation to the men who follow her at the town picnic; Chip with his brazen stance in front of the hunters who want to do him harm. What do these experiences have in common? Are they evidence of bravery or acts of desperation? What emboldens each to act as she or he does? In their respective situations, are Jean and Chip bluffing?

4. When she accepts Chip’s proposal for the second time, why does Carolyn Cooke describe herself as “damaged goods”?

5. Is there one narrator you trust more than the others? Are there any pieces of the story you would have liked to hear from a different narrator?

6. What is the meaning behind Jean’s expression, “sugar”? From Jean’s narration, we know that this is sometimes uttered against her will, even as she struggles to control her words and gestures and subdue the urge to scream. How much control does Jean really have? Do you think her mother’s training has been effective or destructive?

7. When Mr. Moore decides to quietly champion Jean and Chip, he asks himself how much responsibility he takes in doing so–and whether he will be blamed if the worst should come to pass. How does this compare to the way other characters contemplate the consequences of their actions? What do Moore’s actions themselves (arming Jean with his knife, watching Pop on his walks toward the cabin) and the risks they incur say about his feelings toward Jean and the Mackinnons?

8. Why do you think Nova chose to begin the novel as he does, interweaving Chip’s reflections on prison camp with his memories of that frightening drive above the Delaware? How do these experiences inform Chip’s later life and your reading of the novel? Do you think that you, as a reader, would have had a different experience with the book if it had begun in the voice of another narrator?

9. Why does Pop derive so much satisfaction from his arguments with Chip? To what extent does his pleasure depend on his own victory?

10. Pop admires the boa constrictor for its method of killing, which he explains is not by violent squeezing but by patient, controlled elimination of slack on a victim’s exhalation. Do you see Pop applying this lesson in his arguments with Chip? Does this theme come into play elsewhere in the novel?

11. What attracts Jean and Chip to each other? How much would you attribute their mutual attraction simply to their respective circumstances, and how much to a deeper bond? What role does physical attraction play in their relationship?

12. Discuss the role of violence in Chip’s life: Pop’s punches after Chip commandeers the Buick; Gene Moore’s gun to his chest; Jean’s desire to leave physical marks on his body. Does Chip in any way invite such actions? How does he respond to them?

13. In many ways, Pop’s life is driven by ritual, but he is also at times remarkably resilient. For instance, he seems sincerely amused to set up camp in a tent while the farm is being rebuilt. Are there other personality traits of his that surprise you as the story progresses? What are Pop’s weaknesses?

14. Chip’s romance with Jean is the first significant part of his life that is not directed by or against his father, and this new independence is infuriating to Pop and empowering to Chip. But after Jean’s departure, Chip returns fairly quickly to his previous plans, falling back into line as the “good son” by renewing his attentions to Carolyn. In the end, what role has Jean played in Chip’s development as a man? Is the relationship good for him?

Before, During, After
Richard Bausch