How to Make an American Quilt Reader’s Guide 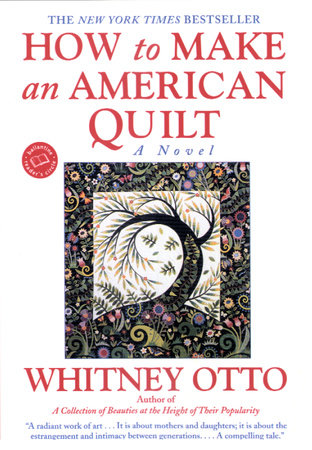 How to Make an American Quilt Reader’s Guide

print
How to Make an American Quilt Reader’s Guide

About this book
"INTENSELY THOUGHTFUL…In Grasse, a small town outside Bakersfield, the women meet weekly for a quilting circle, piecing together scraps of their husbands’ old workshirts, children’s ragged blankets, and kitchen curtains…Like the richly colored, well-placed shreds that make up the substance of an American quilt, details serve to expand and illuminate these characters…The book spans half a century and addresses not only [these women’s] histories but also their children’s, their lovers’, their country’s, and in the process, their gender’s."
—San Francisco Chronicle

1. How To Make An American Quilt moves between a more tradi- tional story-telling format and a more educational series of sections that focus on the making of quilts,and the historical significance around them.What do you think of these sec- tions of the novel?How did they add to your experience of the story?

2.The novel plays with point of view and perspective,some- times switching between characters.In several sections,the narrative refers to you .Who does this you refer to?How do you feel about the use of this alternating perspective?

5.In an attempt to deal with her feelings of betrayal,Glady Joe uses broken fragments of china to create a sort of mosaic,or collage,on her walls.What do you make of her impulse to do this?Why does she do this?

6.Sophia is a very physically powerful and exciting character as a young woman who undergoes a painful transformation. What do you think caused this change to take place in her?

7.In her interview,Whitney Otto says that she would like to be considered an American writer and not a woman writer.Why does she say this?Do you agree with her?Are there certain authors that you consider specifically women writers?

8.After the death of Constance ‘s husband,Em ‘s husband Dean takes to spending long amounts of time with Constance. They are not physically involved,yet they seem to have a powerful connection.Do you consider their relationship a betrayal of Em?Why or why not?

9.After Laury enlists,his friend,Will,begins to call Laury ‘s mother,Corrina,on the phone and they discuss apparently inconsequential things.Why do you think Will does this? Why do they seem to have such a special connection?

10.Anna and her great-aunt Pauline own a special quilt called The Life Before .Pauline ‘s employer ‘s wife covets this quilt. What is it about this quilt that makes it so special?

11.Constance,by her own admission,has trouble making friends especially with other women.Yet she manages to be- come good friends with Marianna.What do you think is the reason for their friendship?What draws them together?

12.At the end of the novel,Finn says,"I ‘ll tell you what makes me happy about marrying Sam,that is,about marrying in general:I know our marriage has just as good a chance of be- ing wonderful as it does of missing the mark."Why does she say this?And why would such a thought make her feel happy about marriage?

Learn More About How to Make an American Quilt
print

A Month of Summer
Lisa Wingate

Till You Hear from Me
Pearl Cleage

Monster in the Middle
Tiphanie Yanique
Back to Top