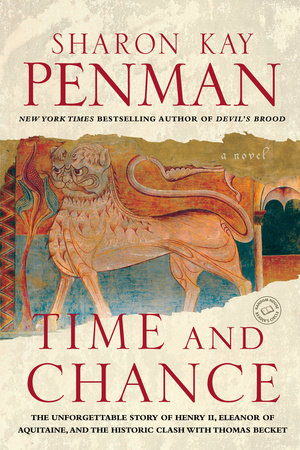 2. As a leader, how do you rate Henry? What about as a father, husband, and friend?

3. Henry believes he will be able to make up for his absence in his children’s lives once they are older. Do you think this will be possible?

4. Discuss the pros and cons of a royal childhood in medieval Europe.

5. Despite his hatred of his former wife, Louis agrees to a marriage between his daughter and Henry and Eleanor’s oldest son. Why does he do so? Is this a wise decision?

6. "If I were God Almighty, I’d have decreed that all kings be only children," remarks Henry. This novel provides ample evidence of the bloodshed and conflict succession in a monarchy has entailed.
Discuss this conflict as it played out in England, Wales, and France in the novel.

7. "Eleanor always seemed to be defying the natural boundaries of womanhood," remarked one character. Discuss how Eleanor both transcends and is constrained by the gender conventions of her day.

8. Ranulf remarks, "Passion might not be the soundest of foundations for a marriage, especially a royal one." Discuss the nature of Henry and Eleanor’s marriage. What do you consider a sound foundation for a marriage?

9. Do you think Eleanor makes the right decision not to confront Henry about Rosamund Clifford? What do you think would have happened if she had?

10. What has Rosamund Clifford gained and lost with her decision to be with Henry?

11. When Henry announced his plan to elevate his chancellor Becket to Archbishop of Canterbury, Eleanor cautioned Henry that he might "be asking too much of Becket." Do you agree or disagree with Eleanor’s assessment?

12. Henry cannot understand what he considers Becket’s betrayal. Is it a betrayal? Is Henry simply blinded by his ego?

13. Do you agree with Hywel’s characterization of Becket as a chameleon?

14. Henry struggles with his guilt over Becket’s murder. What do you judge to be Henry’s role in his death? Do you agree or disagree with the author’s assessment?

16. Henry’s decision to commit the Constitutions of Clarendon to the written record is a controversial innovation. Discuss how a culture is changed in the shift from an oral to a written tradition.

17. Many characters in this novel suffer from divided loyalties. Who makes the most and least wise decisions regarding which side to choose?

18. Why does Ranulf finally choose a side and turn his back on Henry? Do you think Ranulf ‘s rejection is justified?

19. Why did your group choose this book? Are you happy with your choice?

21. Discuss the characters you found most intriguing. Who would you most like to see return in The Devil’s Brood?

22. What is your group reading next?

A Rose For The Crown
Anne Easter Smith

The Last of the Wine
Mary Renault

Stonehenge: A Novel of 2000 BC
Bernard Cornwell

In Royal Service to the Queen
Tessa Arlen

Company of Liars
Karen Maitland
Back to Top