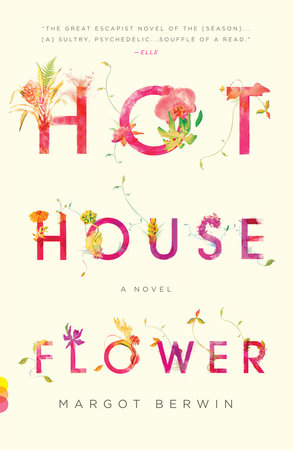 Hothouse Flower and the Nine Plants of Desire, explores plant magic, spiritual discovery, and romantic fever in the jungles of Mexico—an adventure that finds its roots at a green market in lower Manhattan and in one very special Laundromat.

Shortly after her divorce, advertising executive Lila Nova purchases her first plant, a bird-of-paradise. The seller is David Exley, a rugged “country-sexual” who introduces her to the legend of the nine plants of desire. After she meets Armand, who claims to own the nine plants, she finds herself on an adventure beyond her imagination. In the Yucatán, alone, hefting only a backpack, a survival guide and a bottle of expensive shampoo, Lila learns more than she ever wanted to know about the rain forest—and about herself.

1. Hothouse Flower has been described as Eat, Pray, Love meets The Orchid Thief. Have you read either of those titles and do you agree with the comparison? What other works did the book remind you of?

2. What do the nine plants of desire stand for? What do you think about Berwin’s choices for the plants and their properties? What plants would you choose for your legend and what would they represent for you?

3. What do you make of the tenth plant, the passion plant with no name? What is it symbolic of and what role does it play in the book? Why do you think passion isn’t one of the nine original desires?

4. Before each chapter, Berwin includes a short introduction—an explanation of a plant, an idea or an occupation. Did you enjoy these chapter headings? Did they add to your experience of the chapter to come or of the book as a whole? Which were your favorites?

5. Lila, like all of us, is a combination of many qualities—both cautious and adventurous, she shows herself to be greedy but also regretful about the damage she causes. What did you make of Lila as a character? Armand says that she is one of the few people he’s met who is capable of change. Did she change throughout the book? Is that the point of her adventure, or does she become more like the person she always was?

6. How did the symbolism of the black panther develop throughout the book? What role did it play in the commercial Lila creates, in her dream before she leaves for Mexico, and in her realization that the panther is her spirit animal?

7. Armand seems very sure of himself and open to the world at the same time. He is giving and spirited; he is serious about listening to people, but also pokes fun at their problems. What did you make of him as a character? Do you think he invents stories to serve his purposes? How much the part of a puppeteer does he play, desiring for himself the passion plant with no name to give to Sonali? What does his role in the story say about how much we can trust each other’s motives?

8. At the end, Lila finds the snake is inexorably linked to Exley. Did his heart’s desire to be rid of the creature surprise you? What is the difference between Lila’s panther nature and Exley’s snake core?

9. Berwin creates memorable supporting characters, most notably Kody and Sonali. How do they both act as foils to Lila and Armand? What kind of philosophy do they have about the world? Sonali, Armand says, is a flower person, while he and Lila are root people. What is the difference, and how do you see it in the other characters and in your own personality?

10. So much of the book is about relationships—Lila and Kody’s friendship, Lila’s attraction to Exley, Sonali and Armand’s marriage, Lila and Diego’s affair. What role do mating rituals play in the book? How does plant life (such as the sinsemilla and the gloxinia) play a part in mating, and what does Lila learn about herself and her relationships—her own marriage, her attractions?

11. What did you make of the character of Diego? Does he represent a native wisdom lost to those who leave the jungles and stray from knowledge of the earth? Where do you see Lila’s relationship with Diego going?

12. Armand is a fountain of philosophical advice, as is Diego: “you miss half your life always looking down”; “The tropics can happen anywhere . . . they’re a state of mind.” What did you take to be the philosophical tone of the book? How did it help propel the story along, and did Lila’s own philosophies shift over the course of her adventures?

13. The movie rights to Hothouse Flower were bought by Julia Roberts. The book combines adventure, mystery, and romance in a dangerous, lush, and breathtaking setting—did you think of it as a movie as you were reading? Do you think Roberts should play the part of Lila? Who would you cast in the other roles?

14. Hothouse Flower is bursting with plant life. What is your own experience with plants—do they play a role in your life?

15. The Laundromat that Armand runs is a completely magical place—have you ever seen a place like it where you live or anywhere you’ve traveled? What is it like, and how did you discover it?

Margot Berwin earned her MFA from the New School in 2005. Her stories have appeared on Nerve.com, in the New York Press, and in the anthology The Future of Misbehavior. Hothouse Flower is her first novel and it has been published throughout the world in ten languages. Berwin lives in New York City.

The Art of Floating

Love Stories in This Town

Little Big Love
Back to Top