The Courts of Love Reader’s Guide 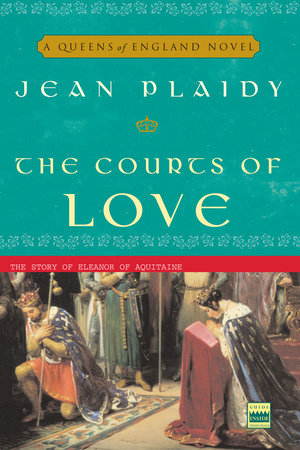 The Courts of Love Reader’s Guide

Eleanor of Aquitaine remains as intriguing today as she has in centuries past. In The Courts of Love, the inimitable Jean Plaidy brings this fascinating queen to life, allowing Eleanor to tell the captivating story of her life and loves in this fictional “memoir.”

Intelligent, independent, and beautiful, at age fifteen Eleanor was named Duchess of Aquitaine, the richest province in Europe. She became Queen of France upon marrying King Louis VII, but their tepid union ended when Eleanor met Henry II, the first Plantagenet King of England. Their tempestuous pairing produced many sons and daughters–two of whom would reign over England–and generated a legend unsurpassed.

A majestic and sweeping story, set against a backdrop of medieval politics, intrigue, and strife, The Courts of Love is filled with fascinating themes: love, passion, betrayal, loyalty, and heartbreak. This guide is designed to help direct your reading group’s discussion of Jean Plaidy’s unforgettable novel.

1. Eleanor of Aquitaine is one of the most enduring figures of medieval history and literature. In reading the story of her life in the first person, was Eleanor’s legend enhanced for you? Why or why not?

2. The book opens with this passage: “When I look back over my long and tempestuous life, I can see that much of what happened to me–my triumphs and most of my misfortunes–was due to my passionate relationships with men. I was a woman who considered herself their equal–and in many ways their superior–but it seemed that I depended on them, while seeking to be the dominant partner–an attitude which could hardly be expected to bring about a harmonious existence.” Do you agree that Eleanor’s relationships with men are what ultimately shaped her fate?

3. Eleanor repeatedly asks herself why she married Henry. “Perhaps he was not the mighty figure I imagined him. In fact, he was by no means the man with whom I had fallen passionately in love. . . . Why had I married him?” (page 252) How would you answer that question? Do you think that she knew Henry’s true nature when she married him, or was love blind in her case? How are Henry and her first husband Louis similar and different? How is Eleanor like her husbands?

4. Throughout the novel, Eleanor fondly refers to her grandfather’s “Courts of Love,” speaking longingly of the troubadours who charmed the crowd with their songs of ardor and devotion, and wishing she could replicate the Courts’ emotion and sensuality in her own court. Why do you think she longed for this time in her life so often?

5. Eleanor has been described throughout history as one of the world’s greatest female rulers, revered for her superior intellect, extraordinary courage, and fierce loyalty to her children and her land. Does Jean Plaidy’s portrait of Eleanor mirror history’s “snapshot” of her? Where might it differ?

6. When her father leaves for his pilgrimage, Eleanor’s sister Petronilla asks her to tell her stories of the Courts of Love. Eleanor says, “I remember some of it, but I did not understand it at the time. . . . Men were very daring in those days and they have changed little. They will sing songs of love and devotion and how they adore you and set you on a pedestal so that they can worship you, and all the time it is merely to lull your feelings into a sense of security, and when you are sufficiently lulled they will take advantage of you. And once that has happened they will tire of you” (page 28). Discuss Eleanor’s opinion of men in terms of her relationships with Louis and Henry. Did she learn from these words?

7. Although Eleanor was greatly disappointed in Louis’s hesitant and rather indifferent style of romance, she also looked at his sexual inadequacies as an opportunity to control him, saying “There was something rather timid about him. While that irked me in a way, for perhaps I had dreamed of a masterful lover, in another way it pleased me for I knew at once that I should be able to lead him the way I wanted him to go” (page 38). Was she able to control him throughout their relationship, and after? How so? Where was she not able to control him? Do you think that his lack of attention to her in this manner actually caused her to lose control of herself?

8. At her coronation as Queen of France, Eleanor takes notice of the men of her court and makes the following observation about one in particular: “[Raoul of Vermandois] had the trick of almost creating a sexual encounter by willing it to take place, a kind of mental seduction. I found it amusing and stimulating; and with a husband like Louis I needed a little stimulation at times.” Is Eleanor’s frankness about her sexual needs surprising?

9. Eleanor learns that Petronilla is the mistress (and carrying the child) of Raoul of Vermandois–the same man Eleanor has lusted after. Eleanor is devastated upon this discovery, saying, “It was a great blow to my self-esteem. I began to wonder how sincere any of the men were who cast desirous eyes on me” (page 72). Is it surprising when Eleanor admits that she draws strength from the admiration of men? How does this contradict her feminist notions about the qualities of a female ruler?

10. Henry’s intense yet torturous friendship with Thomas à Becket is very similar to Louis’s close attachment to the monk Bernard of Clairvaux. Eleanor bitterly despises both of these men. What might explain her vitriol and jealousy toward them?

11. Having been attracted to him from a young age, Eleanor acts on her feelings for her uncle Raymond and they become lovers, their affair ending when Louis abducts her and later when Raymond is tragically killed in battle. “My uncle! My lover! And the most handsome, the most perfect man in the world. . . . Raymond, my love, so alive, so different, the one I had been waiting for all my life–and now he was dead” (page 145). Was it an accident of fate that the man Eleanor believed to be the greatest love of her life happened to be a close relation? Or do you think Raymond was a deliberate choice on her part?

12. Discuss the power of religion and the church over Eleanor, her husband, and her father.

13. What did you think of Eleanor’s decision to repair to the nunnery, Fontevrault, to spend her final days? She says, “I realized that I could be content to spend what was left of my life here. I liked the ways of the convent” (page 374).

14. When Eleanor finds out about Henry’s lover Rosamund, Eleanor exclaims, “He was actually in love with her. That was what was so galling to me. He cared about her. She was not just a woman of the moment. He had brought her to the palace of Woodstock, and while I was in France taking care of the dominions there, Rosamund was living in my apartments as Queen!” (page 314) In light of Henry’s other infidelities of which she was aware, how would you explain why Eleanor found this one to be so egregious?

15. After she leads her sons to revolt against their father, Henry incarcerates Eleanor as punishment. In what ways was Eleanor a captive of Henry’s, other than her physical imprisonment?

Learn More About The Courts of Love
print

The Thistle and the Rose
Jean Plaidy

Confessions of Marie Antoinette
Juliet Grey
Back to Top