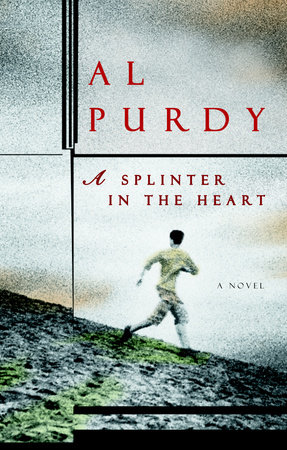 About A Splinter in the Heart

Al Purdy’s only novel, A Splinter in the Heart, is an unforgettable coming-of-age story that unfolds against the real-life tragedy of what came to be known as the Trenton Disaster. Set in 1918, it tells the story of sixteen-year-old Patrick Cameron and the events that will change him – and the Ontario town in which he lives – forever. Over the course of one summer and fall, Patrick finds love with a girl whose betrayal he cannot foresee, confronts the death of his beloved grandfather, and comes to terms with a neighbourhood rival. All the while, his hometown of Trenton lives precariously in the shadow of a dynamite factory, a sinister reminder of the Great War, which brought such prosperity to the town. Vivid with character and event, and evocative of time and place, A Splinter in the Heart is a moving portrait of a young man’s journey into adulthood in an era of change.

Al Purdy was born in 1918, in Wooler, Ontario. He wrote his first poem at the age of thirteen and published his first collection of poetry, The Enchanted Echo, in 1944. In a writing career that spanned over fifty years,… More about Al Purdy

“Al Purdy mapped Canada poetically, and his mapping was as important as any cartographer’s. He gave us a place to live in his writing.”
–Lorna Crozier, National Post

“A fine first novel that combines the idealism of youth with the wit and wisdom of age.”
–Ottawa Citizen

“Purdy has done for Canada what Walt Whitman once did for the United States – he has made it recognizable to its inhabitants.…[He] can touch the visible world with a tenderness and visionary clarity few writers can match. …”
–Maclean’s

“He writes in a delightfully sparse, crisp style, effortlessly melding his poet’s sense of grace with the novelist’s ear for dialogue and eye for imagery.”
–NOW Magazine

“[Purdy] is an astute observer, and from his observations and experiences fashions writing in which we can recognize ourselves.”
–Prairie Fire

“A sensitive treatment of the ubiquitous coming-of-age theme, with the descriptive power of Purdy the poet lending vivid, at times beautiful, images to the narrative of Purdy the prose writer.”
–Saskatchewan StarPhoenix

“Purdy creates a number of scenes and images that carry conviction and power.”
–Books in Canada

“We should be grateful for this book. It is a solid addition to Canadian literature.…”
–Brantford Expositor

“This is a sensual and poetic novel that has all the verve and humour of Purdy’s verse combined with some splendid story-telling.”
–East Toronto Weekly

“[Purdy] creates vivid images in a crisp and clear style.…Once I began reading it [I] found it difficult to put down.…Highly recommended.”
–Fredericton Daily Gleaner

Looking for More Great Reads?
21 Books You’ve Been Meaning to Read
Download Hi Res
A Splinter in the Heart