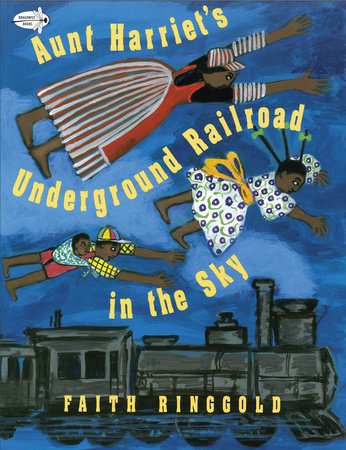 Inspired by people who have overcome adversity, Faith Ringgold creates picture books for children that celebrate freedom, courage, and peace.

THE INVISIBLE PRINCESS
The Invisible Princess is an original fairy tale that takes young readers on a journey to the days of slavery. In true fairy tale form, Ringgold uses the element of magic to make good (the slaves) win over evil (the slave owner).

MY DREAM OF MARTIN LUTHER KING
In My Dream of Martin Luther King, readers encounter boycotts, sit-ins, demonstrations, marches, and the 1968 assassination of Dr. Martin Luther King, Jr., Ringgold stresses the events that led to King’s "peaceful" fight to gain civil rights for all African Americans, and challenges readers to continue his dream.

TALKING TO FAITH RINGGOLD
Faith Ringgold’s personal belief in dreams is revealed in her biography, Talking to Faith Ringgold. She discusses the inspiration behind her writing and her art, and encourages young readers to use their surroundings as inspiration for their own art. Ringgold’s "folk-modern" paintings, which have become her trademark, create a dramatic marriage between her art and her stories.

Pre-Reading Activity
Discuss the meaning of the familiar expression, "free as a bird." Ask students to write a short composition or poem about where they would fly if they had the freedom and ability to do so. Give each student a paper square and ask them to design a quilt square that best represents their idea. Use the quilt squares to make a border surrounding a display of students’ written works.

Dreams — Discuss with the class the difference between fanciful and realistic dreams. Why would Cassie Lightfoot’s dream in Tar Beach be considered a fanciful dream? Tell students that many of the changes that have occurred in the world began with a dream. Ask the class to discuss Martin Luther King, Jr.’s dream for the world. What was Harriet Tubman’s dream? Compare Mama Love’s fanciful dream in The Invisible Princess to Dr. King’s "real" dream. How did Martin Luther King, Jr. help the dreams of his ancestors come true?

Freedom — Ask students to discuss how flying is used as a metaphor for freedom in Tar Beach and Aunt Harriet’s Underground Railroad in the Sky. In Talking to Faith Ringgold, Ringgold says that she believes that she can do anything. How does believing in oneself give a person the freedom to try new things?

Courage — Ask students to define courage. Why does it take courage to become a hero or a heroine? Invite the class to name the many ways that Martin Luther King, Jr., Harriet Tubman, and Patience in The Invisible Princess showed courage.

Peace — In The Invisible Princess, "the Great Lady of Peace" teaches the princess to be "loving, strong, and wise." How do these human qualities relate to peace? Read aloud My Dream of Martin Luther King and ask students to discuss how Dr. King was loving, strong, and wise. What did Mahatma Gandhi teach Dr. King about peace? What could we learn from the messages of these two great men?

Language Arts — The Invisible Princess is an original fairy tale. Tell the class that the conflict in most fairy tales is good vs. evil. Ask students to identify each of these elements in Ringgold’s story. Read aloud My Dream of Martin Luther King. Tell the class that fairy tales originated from dreams. Discuss Martin Luther King, Jr.’s dream. Then have students write or tell a fairy tale that Dr. King might have told to the children of the world.

How are names like Village of Visible, Mama and Papa Love, Great Lady of Peace, Captain Pepper, and Patience symbolic in the story of The Invisible Princess?

Social Studies — Ask students to draw a map of the United States and color the slave states. Then have them find out the location of the terminals on the Underground Railroad and mark them on the map.

Tar Beach is set in Harlem during the Great Depression. Discuss with the class the meaning of the word "depression." Ask the class to research the many hardships that families faced during this time. How was the Depression even more difficult for African Americans? How might Cassie’s life be different today?

Math — Harriet Tubman was born on a plantation in Maryland. She made 19 trips north on the Underground Railroad, taking over 300 slaves to freedom. Ask students to use a map to determine three different routes that Harriet Tubman could have taken from Bucktown, Maryland, to St. Catharines in Canada. Have students calculate the distance of each route. Which route was the best to take? They should consider factors such as distance, terrain, access to waterways, etc.

Science — Cotton was grown on most of the large plantations in the South. Ask students to research how the invention of the cotton gin changed the industry and how cotton is harvested today. Students may also want to trace the development of the cotton mills and list the uses of cotton.

One Step Beyond: The Arts

Music & Storytelling — When all of the slaves were freed in The Invisible Princess, there was "music and dancing and storytelling." Divide the class into two groups. Instruct one group to research music like "Go Down Moses" that dates back to the days of slavery. Have the other group locate stories that originated from the African American culture. Allow each group time to perform some of the songs and stories that they discovered.

Visual Art — Faith Ringgold says that "art is about more than just technique and style. It’s about ideas" ( Talking to Faith Ringgold, p. 23). She gets her ideas from events that are happening around her. (Refer to the painting on pp. 23-24.) Ask students to draw or paint a picture of an event that has occurred in their school or neighborhood.

Creative Drama — Martin Luther King, Jr. is famous for his "I Have a Dream" speech. Plan a class production entitled "Dreams of Freedom," making Cassie Lightfoot the narrator. Ask students to research famous African Americans and their contributions to "freedom" for their race. Some suggestions may include: Dr. Martin Luther King, Jr., Harriet Tubman, Sojourner Truth, Ida Wells, Mary McLeod Bethune, Rosa Parks, and Coretta Scott King. Have students prepare and deliver speeches about "freedom" that each of these individuals might make. Present this production to another class in celebration of Black History Month.

Ask students to list unfamiliar words in each book and try to define the words from the context of the stories. Words they may need to discuss in The Invisible Princess include repentance, tumultuous, and remorse. Students may need discussion regarding terms that refer to slavery and the civil rights movement, including: conductor, slave master, overseers, boycott, fugitives, segregation, and integration.

Teaching Ideas prepared by Pat Scales, Director of Library Services of the South Carolina Governor’s School for the Arts and Humanities in Greenville, SC.

The People Could Fly: The Picture Book
Virginia Hamilton

What Can You Do with a Rebozo? / ¿Qué puedes hacer con un rebozo?
Carmen Tafolla

When I Was Young in the Mountains
Cynthia Rylant

Just Me and My Little Brother (Little Critter)
Mercer Mayer

Voices in the Park
Anthony Browne