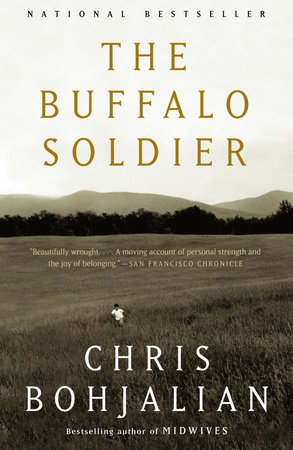 “In The Buffalo Soldier, Bohjalian proves once again that he’s a master novelist.” —The Boston Globe

The introduction, discussion questions, suggested reading list, and author biography that follow are designed to enhance your group’s reading of Chris Bohjalian’s The Buffalo Soldier. Set in rural Vermont, it is the story of a couple devastated by the loss of their twin daughters, the African-American foster child who comes to live with them, and the risks they take, separately and together, to create a family strong enough to heal the wounds of the past.

Two years after her nine-year-old daughters are killed in a raging flood, Laura Sheldon is beginning to emerge from her cocoon of grief. She has returned to her job at the Humane Society, teaches Sunday school classes, and spends time in the garden she once tended with her daughters. But the confusion and pain of the tragedy has left deep scars on her marriage. Anxious to escape his own sorrow and Laura’s unpredictable, often hurtful, mood swings, Terry Sheldon immerses himself in his job as a state trooper and the distance between husband and wife widens day by day. Laura comes to believe that the best way—perhaps the only way—to renew themselves and their marriage is by sharing their love with another child. Unable to have children of their own, they become foster parents to Alfred, a taciturn ten-year-old who has suffered more than his fair share of rejection. As Laura takes the first tentative steps to becoming a mother again, Terry finds it impossible to form a relationship with a boy whose background and interests are so different from his own. Feeling alienated and excluded, he falls into an affair with a young woman and allows himself to fantasize about starting over. Alfred guards his emotions carefully, ever alert to the precarious state of the Sheldons’ marriage and to his status as an outsider in their home and the community. His adjustment is eased by his unlikely friendship with Paul, an elderly neighbor who gives him a book about the African-American cavalry unit formed after the Civil War—the “buffalo soldiers”—and encourages him to embrace their legacy of bravery and honor.

Focusing by turns on Alfred, Laura, and Terry, Chris Bohjalian illuminates lives haunted by loss and overwhelmed by fears and uncertainties. With compassion and touches of gentle humor, he chronicles the ebb and flow of their relationships, and the qualities, both selfish and heroic, that they discover within themselves. In a stunning conclusion, Alfred performs an act of astonishing daring, awakening in his patched-together family a spirit of acceptance, forgiveness, and hope for the future.

1. How does the initial portrait of Alfred [p. 17] establish his sense of alienation in Cornish? What else does this chapter reveal about Alfred, his self-image, and the image he wants to project to the world? How does Bohjalian use specific language and physical details to convey Alfred’s point of view?

2. What is your first impression of Laura? Does the description of her behavior with Alfred [pp. 26–28] make you question her decision to take in a child? Do you think her reaction is common among foster parents entrusted with older, more independent children or are they in some way unique to her situation? Why is the idea of Alfred discovering her daughters’ graves disturbing to her [p. 27]? What insights do her private thoughts, as well as her
conversation with Terry [p. 32], offer into her own assessment of her ability to love and care for a child?

3. “There were months when [Laura] believed she’d never get better—and what was more important for everyone around her, it was clear that she didn’t want to” [p. 28]. What evidence is there of her reluctance to move on with her life? Why is she unable to draw comfort and strength from the bereavement group and her friends and neighbors?

4. In the aftermath of the drowning, Terry Sheldon retreats into his work. Is this simply an indication of the importance of his profession in reestablishing a normal life after the tragedy or does it say something about his emotional make-up? Is the way he handles his grief related to his training and work as a state trooper or do you think his behavior is typical of most men?

5. How do Terry’s doubts about taking Alfred in differ from Laura’s? Do you think he is right to be concerned about his ability to relate to an African-American child [p. 43]? Should foster care agencies make an effort to place children in familiar environments (in Alfred’s case, a more urban, more integrated setting) or is the most important thing finding a safe, caring home for a child?

6. Which partner do you think is more responsible for the estrangement between Laura and Terry? To what extent does Laura’s lack of interest in sex, as well as her emotional withdrawal, explain Terry’s attraction to Phoebe? Do you think that he is justified in feeling that Alfred’s presence has made him “irrelevant” to Laura’s wellbeing? What other factors play a part in his decision to continue seeing Phoebe, despite his feelings of guilt? What was your reaction to his musings about his choice between making a family with his “real child” and remaining with Laura and Alfred [pp. 201–202, 220–22]? Is Phoebe completely honest with Terry—and with herself—about what she wants and expects from their relationship?

7. Paul Herbert’s empathy and generosity make a tremendous difference in Alfred’s life. Why is he able to break through Alfred’s shell? How does the way Paul talks to him (for example, their first conversation about the buffalo soldiers [pp. 131–134]) differ from the conversations between Laura and Alfred? What does his friendship with Alfred offer Paul? What do you think would have happened to Alfred without Paul’s presence in the town?

8. The confrontation between Terry and Alfred [pp. 250–252] is one of the most powerful and poignant incidents in the book. What threads of the story come together in this scene and its immediate aftermath? What does it reveal about the reasons for the antipathy between Alfred and Terry? Do you think that Terry allows his emotions to overtake his sense of reason, and if so, why? Why does he tell Alfred not to discuss the incident with Laura? Why does Alfred agree to remain silent?

9. The novel begins and ends with floodwaters engulfing the town. Why is a flood a potent metaphor for framing the events of the novel?

10. What purpose do the passages from the book about the buffalo soldiers, which introduce each chapter, have in the unfolding of the plot and your sense of the changes that Alfred is undergoing? Do they cast any light on the other characters? Which quotations did you find particularly significant?

11. What role does the setting play in the novel? How does Bohjalian bring to life both the positive and negative aspects of a small-town community in describing how people treat Laura and Terry after the accident? To what extent are Alfred’s difficulties in fitting in attributable to the fact that he is the only black person in Cornish? Should Laura have reacted more forcefully to the insensitive or simply foolish remarks she hears around town and from his teacher [pp. 88–89]? Do you think she and Terry should have done more to help Alfred make friends by talking to other parents, teachers, etc.?

12. Although the chapters in The Buffalo Soldier focus on each of the characters in turn, the events are related in an objective, third-person voice. Why does you think Bohjalian chose to use a third person narrator rather than having each character speak in his or her own voice? Does this strengthen or weaken your involvement with the story and the individual characters? Which portraits do you think are the strongest? Does this have to do with the way Bohjalian presents them or with their roles within the story itself?

13. In his previous books, Bohjalian explored such topics as midwifery, homeopathic medicine, and transsexuality. In what ways does The Buffalo Soldier represent a departure for him? If you have read Midwives, The Law of Similars, or Trans-Sister Radio, what similarities do you see between them and The Buffalo Soldier? Are there themes that recur throughout his work?

Chris Bohjalian is the author of eight novels, including Midwives (an Oprah’s Book Club selection and a Publishers Weekly Best Book), The Law of Similars, and Trans-Sister Radio. His work has won the New England Book Award. He lives in Vermont with his wife and daughter.

The Secret Between Us
Barbara Delinsky

What We Lose
Zinzi Clemmons

A Day Late and a Dollar Short
Terry McMillan

The Particular Sadness of Lemon Cake
Aimee Bender
Back to Top