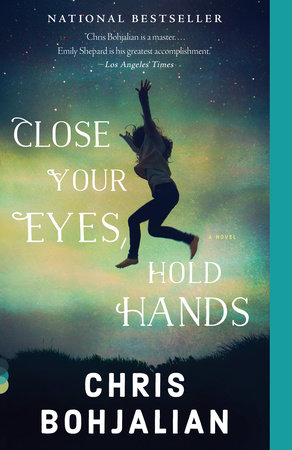 The questions, discussion topics, and suggestions for further reading that follow are designed to enhance your group’s discussion of Close Your Eyes, Hold Hands, Chris Bohjalian’s gripping new novel about a teenage runaway fighting for her life and her dreams in the aftermath of a nuclear disaster.

In a voice that shifts from anguished to sarcastic, heartbroken to hopeful, sixteen-year-old Emily Shepard recounts her solitary odyssey after the meltdown of a nuclear power plant near her home in northern Vermont. Both her parents worked at the plant: her father as chief engineer, her mother as head of public relations. Her father had a reputation as a heavy drinker, and in the media furor that follows the accident he becomes the scapegoat. Evacuated to Burlington with her classmates, Emily realizes her very name puts her in jeopardy. She assumes a new identity as Abby Bliss—the name of the best friend of her idol, the poet Emily Dickinson—and enters the tumultuous world of life on the streets. She briefly finds haven at a shelter for runaways, then moves on to a seedy apartment where she and other teens are forced into drug dealing and prostitution. Escaping to the streets, Emily meets a nine-year-old boy who has run away from an abusive foster home. They form an intense and caring bond until another crisis tears them apart. Alone again, Emily makes one final risky choice, hoping to make peace with her past at last.

The Washington Post called Emily “the most memorable teenage protagonist in recent fiction.” As you journey with her, you will be captivated, appalled, and deeply moved by her extraordinary tale.

1. Emily says, “Obviously I made some bad choices. I’m still here, however, so I made some okay ones, too” (p. 41). How much does her fate depend on her own decisions, wise or unwise? What role do events beyond her control—in particular, the public’s unrelenting hostility toward her father—play in these decisions (pp. 41, 53)?

2. Emily overhears a National Guardsman saying that “the energy company will want this to be human error. If it’s human error, then nuclear power doesn’t look so bad. . . . And [the Shepards are] both dead by now. There’s not a lot of collateral damage when you have dead people you can blame” (p. 77). Do you think this is an accurate assessment of how industries and perhaps governmental agencies react to disasters? Can you think of real-life examples when this might have occurred?

3. Emily’s descriptions of her life as a runaway and of Cameron’s childhood experiences (pp.162-63, 166) are often grim and graphic. For the most part, Emily presents them in a straightforward, almost flip manner (p. 172, 174-5, 187). How does this illustrate the realities of life on the streets? What do her attachments to Andrea, Camille, and especially Cameron, and her reminiscences about her parents (pp. 113-14, 201, for example) show about Emily’s ability—and need—to deal with the harsh situations she faces?

4. In telling her story, Emily moves back and forth in time. How does her narrative reveal her state of mind and the ways in which she perceives or filters her experiences? Do the language and the style accurately reflect the voice of a teenage girl? What passages ring particularly true to you?  What is the significance of her noting, “Sometimes when I reread what I’ve written, I find myself creeped out by what’s between the lines. What I haven’t written” (p.48)?

5. Why does Emily divide her story into B.C., “Before Cameron,” and  A.C., “After Cameron”? Does the division represent something more than mere chronology

6. How would you characterize Emily’s decision to return to the Northeast Kingdom? Is she acting foolishly or is her decision understandable, a necessary, essential conclusion to all that has gone before?

7. Many of the stories we read about teens in crisis explore the lives of those raised in crime-ridden, poverty-stricken areas. Emily comes from an educated, upper-middle-class family, and lives in a “meadow mansion.”  What does she share with troubled teens from less fortunate backgrounds? In what instances do Emily’s reactions to her circumstances embody the positive aspects of her upbringing?

8. Did you know where the title of the novel came from before it was revealed (p. 238)? Why do you think Bohjalian chose this phrase as his title? How does it relate to Emily’s philosophy about the world and the challenges she faces over the course of the novel?

9. How would you describe the overall mood and tone of the novel? How does Bohjalian balance the darkness at the heart of the story with an engaging, often humorous portrait of its protagonist? Would you call Emily a heroine? Why or why not?

10. How do the quotations from Emily Dickinson throughout Close Your Eyes, Hold Hands illuminate the themes of the novel? Consider the relevance of “I’m Nobody! Who are You?,” one of Dickinson’s best-known poems (p. 59), as well as the extracts on pages 19, 78-79, 134, and 154. Does the use of Dickinson’s poetry enrich your experience as a reader? Why is Dickinson’s life, as well as her poetry, so appealing to Emily?

11. Several serious accidents have occurred at the nuclear plants on Three Mile Island, and in Chernobyl and, most recently, at Fukushima Daiichi. What is your opinion on Emily’s assertion about the public’s reaction to these and similarly horrific events: “We watch it, we read about it, and then we move on. As a species, we’re either very resilient or super callous. I don’t know which” (p. 139)?

12. Close Your Eyes, Hold Hands deals with some of the most difficult issues of our times: the possibility of nuclear catastrophe, homelessness, drug dealing, prostitution, and child abuse. In what ways does it offer insights that news reports and official studies cannot duplicate?

Chris Bohjalian is the author of seventeen books, including the New York Times bestsellers The Light in the Ruins, The Sandcastle Girls, Skeletons at the Feast, and The Double Bind. His novel Midwives was a number one New York Times bestseller and a selection of Oprah’s Book Club. Three of his books have been made into movies. Bohjalian lives in Vermont with his wife and daughter.

Do Not Become Alarmed

One Last Thing Before I Go

My Sunshine Away
Back to Top