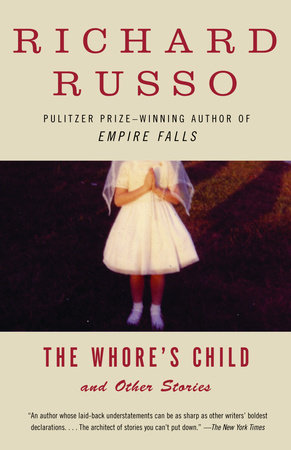 “An author whose laid-back understatements can be as sharp as other writers’ boldest declarations . . . the architect of stories you can’t put down.” —The New York Times

The introduction, discussion questions, author biography, and suggested reading list that follow are intended to enhance your group’s reading of The Whore’s Child, the first collection of short stories from Richard Russo, who was awarded the Pulitzer Prize for his bestselling novel Empire Falls. With a fluency of tone that will surprise even his most devoted readers, he captures both bewildering horror and heartrending tenderness with an absorbing, compassionate authority.

A jaded Hollywood moviemaker uncovers a decades-old flame he never knew he’d harbored. A precocious fifth grader puzzles over life, love, and baseball as he watches his parents’ marriage dissolve. Another child is forced into a harrowing cross-country escape whose actual purpose he learns only after the fact. An elderly couple rediscovers the power, and the misery, of their relationship during a long-awaited retreat to a resort island. And in the title story, a septuagenarian nun invades the narrator’s college writing workshop with an incredible saga. With The Whore’s Child, a masterful novelist extends his versatility and accomplishment, demonstrating yet again that “there is a big, wry heart beating at the center of Russo’s fiction” (The New Yorker).

1. For discussion of “The Whore’s Child”
In what ways does Sister Ursula present a challenge to the writing teacher? Does the story suggest that the teacher treats all his students with such delicacy and compassion, or is she a very special case? What do the younger students’ comments reveal about them?

2. The act of telling or writing one’s story is usually thought of as therapeutic. What is the cost of Sister Ursula’s compulsion to write her story? Given what she learns in the process, how do you imagine she will respond to this new knowledge?

3. For discussion of “Monhegan Light”
What does Martin not understand about Laura and about himself? How does his meeting with the painter Robert Trevor change him? Does the story suggest that in all marriages, worlds of emotion and experience may be kept secret from one’s spouse?

4. Martin thinks that his wife’s sister Joyce hates him because he is a man: “It was because you had a dick. You just didn’t get it” [p. 26]. Late in the story, information is revealed that could change the reader’s view of Joyce as an angry, bitter, joyless person. What has been the motivation behind Joyce’s behavior towards Martin? Is she justified in her anger? Does the reader’s perspective on Martin shift as well?

5. How are Martin’s ideas about feminine beauty, and women’s anxieties about their beauty, connected to his profession? If the story is partly about seeing, and seeing what we want to see, how do Martin’s and Trevor’s ways of seeing differ? What happens when Martin sees his wife through Trevor’s eyes?

6. For discussion of “The Farther You Go”
The narrator, Hank, is confused by his negative feelings toward his daughter Julie. What are some of the reasons he feels so alienated from her? How does Julie feel about her father?

7. As he drives his son-in-law Russell to the airport, Hank thinks, “I’m afraid he’ll tell me what’s wrong with my daughter, and why their lives together went wrong” [p. 65]. Why is he being drawn so intimately into his daughter’s marital problems? What is the role of “failures of imagination” [p. 70] in the misunderstandings among Hank, Faye, Julie, and Russell?

9. For discussion of “Joy Ride”
What is worrisome, to the twelve-year-old narrator, about the group of friends he has fallen in with? Is there a relationship between the boy’s “random acts of senselessness” [p. 78] and his mother’s restlessness?

10. The mother compares the multitude of small cuts she and her son receive from the shards of their broken windshield to her marriage [p. 92]. What sort of man is her husband, and what kind of family life do the three have together? Why, when they return home and again years later, does the child suffer from a sense of having betrayed his father? Is the child more mature than his mother?

11. Why does his mother take the boy along on her trip, where he becomes a witness to her sexual yearnings and her dangerous flirtations with strangers? Is the boy right, at the end of the story, in thinking that his mother never intended to leave his father for good, and that she really did want just a “joy ride”?

12. For discussion of “Buoyancy”
How strongly does the story suggest that Paul Snow is responsible for the misery of his wife? Why is the memory of her breakdown, some years in the past, so fresh? Why is he always vigilant about her mental state? What is significant or symbolic about his last name?

13. What is the meaning of the “phantasm” Paul Snow sees just before he collapses on the beach [p. 137]? Is there a kind of poetic justice in the fact that he too suffers a breakdown?

14. What is revealed in Snow’s remark to his wife, “Cover yourself, June. For God’s sake” [p. 142]? Does the end of the story suggest that this unhappy marriage is finally over?

15. For discussion of “Poison”
The narrator and his wife Clare disagree about his friend Gene and what “Gene’s head is full of. Hypocrisy and bitterness, she thinks, whereas my vote always leans toward injury and rage. We agree on self-loathing, though Clare considers this a sign of his intelligence, while I do not” [p. 147]. Who is the more accurate judge of Gene’s character?

16. Why is the narrator susceptible to the power of Gene’s obsession with their shared past, and Gene’s desire that they go back and fight to shut down the mill? If the two friends represent two different ways of dealing with injury—obsession and repression—whose is the more psychologically healthy?

17. The narrator’s father died of a brain tumor, and the narrator himself, we learn, has just had a tumor removed that turned out to be benign. What does his dream, related at the end of the story, signify?

18. For discussion of “The Mysteries of Linwood Hart”
What do Linwood’s thoughts reveal about him? Is it unusual for a child to believe that objects have inner lives? How well do his parents understand or protect him?

19. What do the descriptions of various members of Linwood’s extended family—and his mother and father—suggest about the rift between his parents? Why do his parents get back together? How is Linwood changed at the end of the story?

20. For discussion of THE WHORE’S CHILD
The critic Diane Roberts noted, “Russo is a master of the small moment as nuclear explosion, the life-changing turn of the screw” (Houston Chronicle). In which stories are such moments of insight particularly powerful?

21. In several of these stories, husbands and wives are seriously at odds, and children are caught between feuding parents, or parents have to intervene for troubled children. Is Russo’s view of family life—or married life—particularly bleak, or scrupulously realistic?

22. What is the effect of the collection as a whole, given the order, pacing, and content of the stories? What view of life does it project?

23. What do the two stories told from a child’s perspective have in common? How does Russo show himself to be a compassionate observer of children’s troubles?

Richard Russo grew up in Gloversville, New York. He is the author of five novels, including the Pulitzer Prize–winning Empire Falls. He lives in coastal Maine with his wife and their two daughters.

For the Relief of Unbearable Urges
Nathan Englander

The Girl in the Flammable Skirt
Aimee Bender