All That Is Reader’s Guide 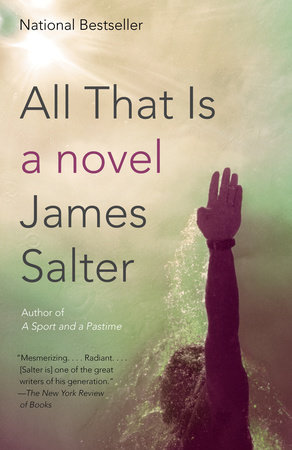 All That Is Reader’s Guide

print
All That Is Reader’s Guide

The introduction, discussion questions, and suggested further reading that follow are designed to enhance your group’s discussion of James Salter’s All That Is, the first novel in nearly thirty-five years by the PEN/Faulker award-winning author of A Sport and a Pastime, Light Years, Solo Faces, and There and Then.

All That Is follows the career of Philip Bowman, from the final Pacific battles of World War II to the publishing world of New York City and Europe, vividly capturing the textures of one man’s life in both its ordinary moments and its flashes of drama.

The novel begins as Bowman, a young naval officer, prepares for the invasion of Okinawa, the harrowing kamikaze attacks that would destroy more than thirty U.S. ships in a single day, and the bloody ground invasion that would ultimately claim over 65,000 American lives. Though Bowman’s experience of the war is relatively brief, it establishes him as a man and gives him an enduring sense of pride.

When he returns from the war, Bowman takes a job as a reader at a small but prestigious literary publisher, eventually becoming a powerful editor, the kind of editor agents and authors court and covet. He moves with ease through the milieu of literary parties and dinners, meetings with authors and other publishers, trips to London and Paris. He marries the beautiful Vivian, a woman from the horse country of Virginia, a haughty, insular world of privilege and pedigree. Vivian has no interest in books; Bowman none in horses. Vivian’s father coldly refuses to give his blessing to Bowman’s proposal, rightly predicting that the marriage will fail. But Bowman is blinded to their differences by the intensity of his attraction.

After his divorce, Bowman has a series of love affairs. He is a sensualist, drawn to the beauty of women and to the aliveness, the depths and heights and self-forgetfulness, of sex. But none of these relationships prove lasting, and one ends in a devastating and costly betrayal, a betrayal that Bowman avenges with calculated viciousness.

Though never explicitly stated, an undercurrent of loneliness runs through Bowman’s life as he moves from one house or apartment to another, never creating a home. Bowman’s is a largely quotidian life, and it is a testament to Salter’s mastery that he is able to make of it such a compelling story.

Salter’s prose style is unmistakable—terse, restrained, tough-minded, yet capable of a subtle, painterly lyricism. He is closer to Hemingway than to his contemporaries. All That Is progresses not through conventional twists and complications, but episodically, through sharply etched scenes linked more by association than any overarching narrative structure. Unlike most novelists writing today, the narrative voice of All That Is holds the characters at arm’s length rather than identifying with them and leaves readers to make their own judgments. Indeed, the emotional lives of Salter’s characters are left largely implicit, glimpsed through gesture and chiseled dialogue rather than expansive narrative commentary.

All This Is brilliantly captures the unfolding of one man’s life and the fluid, unpredictable, bittersweet nature of life itself.

2. James Salter has been called “a writer’s writer” and praised for the artistry of his sentences. What are the most appealing qualities of Salter’s prose style? In what ways does his writing differ from that of most contemporary novelists?

3. The novel is told primarily from Bowman’s point of view, but the narrative shifts perspectives, and the narrator reveals things that Bowman can’t know about. What is the effect of Salter switching between viewpoints and keeping a fair authorial distance from his characters?

4. What kind of man is Philip Bowman? What are his most striking attributes? What drives him? In what ways is he both flawed and honorable? Does he change in any essential way over the course of the novel?

5. In All That Is Salter eschews a conventional plot in favor of a more episodic, impressionistic, associative structure. What are the pleasures of reading such a narrative? In what ways does it feel closer to the way life actually happens, or is remembered, than a more tightly structured narrative might seem?

6. Bowman’s proposal to Vivian, which takes place in a crowded bar, is decidedly awkward. “What would you think,” he asks, “about living here [in New York City]? I mean, we’d be married, of course.” Vivian replies: “There’s so much noise in here,” and then asks, “Was that a proposal?” Bowman says, “It was pitiful, wasn’t it? Yes, it’s a proposal. I love you. I need you. I’d do anything for you.” Vivian never directly accepts. Instead, she says, “We’ll have to get Daddy’s permission” [p. 59]. What does Salter suggest in this scene, simply through dialogue, about Bowman and Vivian’s relationship and its chances for success?

7. Why does Bowman’s marriage to Vivian fail? Why is he blind to their incompatibilities?

8. In the chapter titled “Forgiveness,” Bowman has a brief, intense affair with Christine’s daughter, Anet, and then abandons her in Paris. “He had forgiven her mother. Come and get your daughter” [p. 311]. Why does Bowman exact his revenge on Christine through her daughter? Is his cruelty justified given how Christine treated him? What are the consequences of his actions?

9. Enid tells Bowman during their second conversation, “I don’t think you ever really know anybody” [p. 123]. Does the novel itself seem to endorse that view? What instances in the book demonstrate the inability of one person to fully know another?

10. All That Is begins with the final, harrowing battles of WWII, the kamikaze attacks, the bloody invasion of Okinawa. How does his experience of the war affect Bowman? In what ways does the war provide the defining context for the rest of his life?

11. The novel is filled with vivid portraits of minor characters—Bowman’s war buddies, friends in publishing, lovers, in-laws, publishers, etc. What do these minor characters add to the texture of the narrative? Who are some of the most memorable among them?

13. In an interview with the Paris Review, Salter said “I believe there’s a right way to live and to die. The people who can do that are interesting to me. I haven’t dismissed heroes or heroism.” Does All That Is present an ethos or right way of living? Is Philip Bowman heroic?

14. All That Is concludes with Bowman and Ann planning a trip to Venice. “We’ll have a great time,” Bowman says. What is the effect of this open-ended ending? Are there any signs that Bowman’s relationship with Ann will be any more lasting than his others have been?

James Salter is the author of the novels Solo Faces, Light Years, A Sport and a Pastime, The Arm of Flesh (revised as Cassada), and The Hunters; the memoirs Gods of Tin and Burning the Days; and the collection, Dusk and Other Stories, which won the 1989 PEN/Faulkner Award. He lives in Colorado and on Long Island.

Of the Farm
John Updike

The Music of Chance
Paul Auster

The Crying of Lot 49
Thomas Pynchon

Spartina
John Casey and John D. Casey
Back to Top