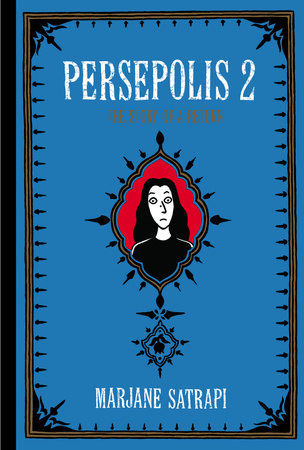 The questions and discussion topics that follow are designed to enhance your group’s reading of Persepolis 2 by Marjane Satrapi. Persepolis 2 begins where Persepolis ends, with Marjane leaving Iran and arriving in Austria to attend high school and live with family friends. After four years filled with loneliness, confusion and prejudice, Marjane returns to her parents in Iran. We observe her difficult homecoming and the life she manages to carve out for herself–friends, university, romance–before the repression and the relentless, state-sanctioned chauvinism force her to face whether she can have a future in her homeland. Funny and heartbreaking, edgy and searingly observant, Persepolis 2 follows the life of Marjane and her country.

1. Compare Persepolis 2 to other stories of the immigrant experience you’ve read (perhaps The House on Mango Street, The House of Sand and Fog, The Joy Luck Club) or to what you imagine emigrating to a new country to be like. What are the basic difficulties shared by immigrants? What does one gain and lose by leaving one’s country and adopting a new one? How does one calculate/weigh the gains and losses? Why does Marjane leave Iran, return, and then leave again? Will she always be “a Westerner in Iran, an Iranian in the West”?

2. How do you think Marjane’s experience would have been similar or different if she had gone to a high school in the United States, in your hometown? Would you have befriended her?

4. How is Persepolis 2 particular to its time? How does the cultural and political atmosphere of the 1980s affect Marjane? What trends (in attitude, dress) does Marjane refer to and adopt in Austria that are specific to the 1980s? What does the book teach you about that time? What were you doing in the 1980s?

6. What does Marjane learn from her experiences with drugs, homelessness, depression, and a suicide attempt? How did she slip into those periods? What external and internal forces brought her to take to living on the streets? How does she overcome these obstacles and transform herself into a stronger woman?

7. How is this story different in comic strip form than if it were a straight prose memoir? What do the black and white images add to the narrative? What has Satrapi emphasized and what has she overlooked by telling her story in a non-traditional manner?

8. How is Marjane’s political sense/being formed? Which experiences and people most influence her and pique her interest in politics?

9. Persepolis, the first volume, received much praise and sold well across the United States. How do you explain its appeal? Why is a book about growing up in Iran succeeding in the United States at this time? What drew you to this book? What have you learned about Iran? How is Iran’s recent history inextricably entwined with Marjane’s story?

10. What have you learned about university life in Tehran? Describe how the authorities enforce the separation of the sexes, and how the students circumvent these rules. If you’ve read Reading Lolita in Tehran, compare the life of those women with that of Marjane and her friends.

11. In the beginning of Persepolis 2, Marjane wants to become “a liberated and emancipated woman.” By the end, do you think she achieves this goal? In what ways is this story a typical coming-of-age tale filled with obstacles that the protagonist must overcome on her journey to adulthood? How is this similar or different to coming-of-age stories that you’ve read?

12. Persepolis 2 is filled with vibrant secondary characters. Describe some of them. Describe the men in Marjane’s life and her relationships with them. Who stands out as the most memorable and influential person on Marjane?

13. Why does Marjane frame an innocent man while waiting for her boyfriend one afternoon? How is she betraying her family as well as the man himself? How does she redeem herself in her grandmother’s eyes? While in Austria, Marjane tries to assimilate and denies being Iranian, “betraying my parents and my origins”? How and why does she betray them? What are the consequences of this? Do you think her betrayals are justified?

14. How do tradition, family, duty, opportunity and memory each play a role in determining whether Marjane returns to Europe or not by the end of the book? Why do Marjane’s parents encourage her to leave both times, as a 14-year-old and as a 22-year-old, though they remain in Iran?

15. Despite being forced to wear the veil in Iran and hating it, Satrapi recently wrote an article in The Guardian (UK) newspaper against banning the veil in French schools and stating that forcing girls not to wear the veil is as bad as forcing them to do so. Do you agree with her stance? Describe the role of the veil in Persepolis 2. What is its religious and social purpose? How do the women deal with wearing the veil?

Marjane Satrapi was born in 1969 in Rasht, Iran. She now lives in Paris and is a regular contributor to magazines and newspapers throughout the world. Persepolis was translated into twelve languages and was awarded the first Fernando Buesa Peace Prize in Spain in 2003.

I Never Saw Another Butterfly

Ester and Ruzya
Back to Top