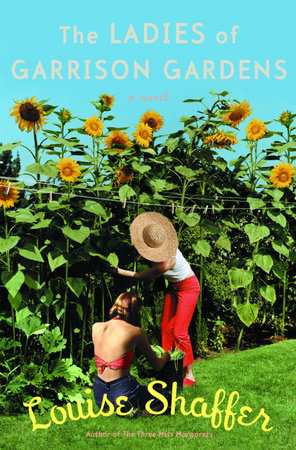 About The Ladies of Garrison Gardens

Charles Valley’s legendary dowagers, the three Miss Margarets, have lost one of their own: Peggy Garrison, who married into a huge fortune but was constantly overshadowed by the legacy her husband’s first wife, the great Myrtis Garrison. When Peggy’s will is read, the news of who will take over the Garrison fortune shakes the town to its core. To everyone’s shock, Peggy has left all of the Garrison holdings–the world-famous botanical gardens, the massive resort, and the lovely Garrison “Cottage,” where FDR once visited–to the town’s down-and-out wild child, Laurel Selene McCready.

Laurel was like a daughter to Miss Peggy, but the last thing she wants to do is step into Miss Peggy’s shoes as the wealthiest, most powerful person in town, especially since the Garrison fortune never bought Peggy any happiness. On top of that, when Laurel reluctantly explores her hew home, the storied Garrison Cottage, she discovers that mysteries abound when it comes to the great Miss Myrtis. What clues are hidden in an old suitcase containing a child’s dress and sheet music dating back to the Southern Vaudeville circuit? Who is the elderly woman outside Atlanta who has been keeping track of the Garrison estate’s every development via the Charles Valley Gazette? And how will Laurel avoid the fate of her two predecessors whose secrets have far greater implications than Laurel could ever have imagined? Culminating in an unforgettable sleight of hand, proving that behind every great fortune there is a great crime, The Ladies of Garrison Gardens is as page-turning and irresistible as its predecessor. 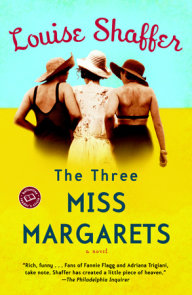 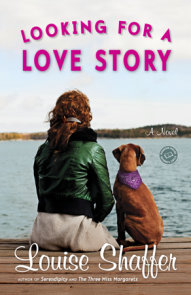 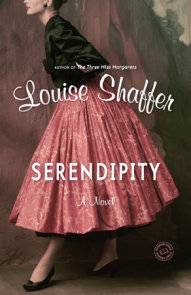 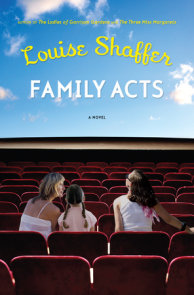 See all books by Louise Shaffer

Louise Shaffer is the author of Family Acts,, The Ladies of Garrison Gardens and The Three Miss Margarets. A graduate of Yale Drama School, she has written for television, and has appeared on Broadway, in TV movies, and in daytime… More about Louise Shaffer 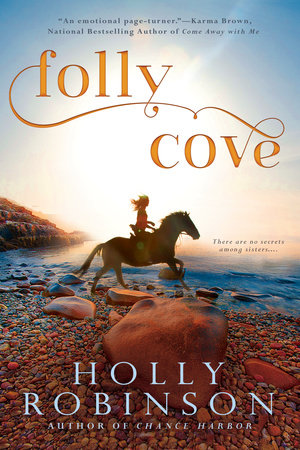 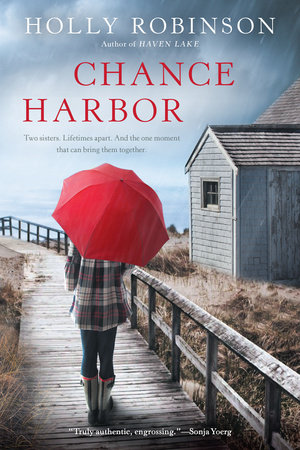 More Than You Know 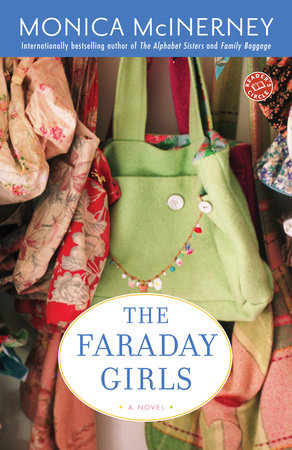 At Home with the Templetons 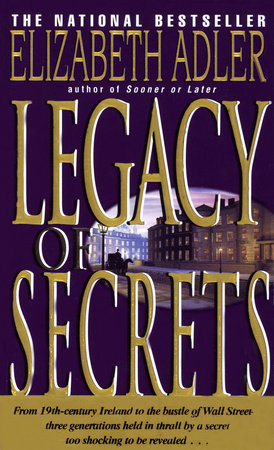 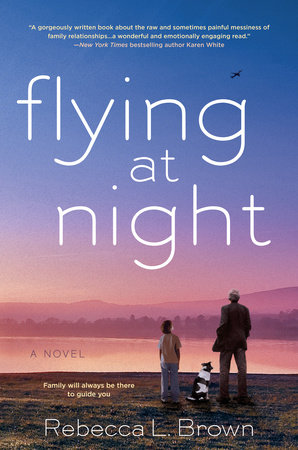 Praise for The Three Miss Margarets

“A romp of a read–warm but never smarmy, wise without pretense of profundity. Shaffer tells a good story that’s part mystery but mostly an exploration of loyalty and friendship.”
–St. Louis Post-Dispatch

“The Miss Margarets are treasures. . . . Shaffer unfolds the story deftly. . . . Each of the three Miss Margarets is a wonderfully realized character; each has a closely guarded secret life.”
–The Boston Globe

“A high level of suspense . . . Drop by this charming Southern town. No doubt you’ll be invited to join the three Margarets on the veranda and sip sweetened tea, lemonade, or even Gentleman Jack . . . and enjoy the promise of a good read.”
–The Roanoke Times

Interview with Louise, Myrtis, and Peggy

(This interview takes place in the main living area of a house that either is, or looks exactly like, Garrison Cottage.)

Louise: Okay, this is even weirder than the interview I did for The Three Miss Margarets. I mean, not to be rude, but you guys are dead.

Myrtis: Not that we’re complaining.

Peggy: Actually, I was kind of ticked off when I first heard about it.

Myrtis:The point is, you are the author. This interview is your choice.

Louise: Right. And remind me again why I picked this way to do it?

Peggy:Well, you have been under a bit of stress lately.

Myrtis: Shall we begin? Peggy, do you have the list of questions?

Louise:You have a list? It’s all written down and everything?

Peggy: Miss Myrtis is very organized. Here we go: Why did you decide to write The Ladies of Garrison Gardens?

Louise:The thing is, I wasn’t planning to go back to Charles Valley after The Three Miss Margarets. I thought I was finished with all of you. No offense.

Myrtis: None taken, but you could have phrased that a little more gracefully.

Louise: Sorry. But back to reasons for writing The Ladies of Garrison Gardens. The first thing that happened was, I started getting e-mails from readers saying they wanted to know what happened to Laurel after she came back home. And my editor said that the publisher would love a sequel if I thought I wanted to write one. Then I was having lunch with my agent and he said, “You know, Peggy and Li’l Bit are both pretty well off and neither of them has a family, so when they go, who gets all the stuff ?” And that started me thinking.

Peggy: So it’s your agent’s fault that I’m dead.

Louise: Not totally. After that lunch, I decided I liked the idea of writing about a legacy, which means somebody has to kick off, and then when I was trying to decide who it should be . . . well, let’s face it, it’s not like you took very good care of yourself.

Peggy: All right, moving along.

Louise: Once I started thinking about Laurel and what happened to her after The Three Miss Margarets, I realized there were some issues I wanted to explore. At the end of the first book, I had a character who
had been angry all her life—that was her big motivator—who had made her peace with the three Miss Margarets, and with at least a part of her past. I wondered what you do when all of a sudden your reason for getting up in the morning is taken away? Even if it was a bad reason, it did get your blood flowing. And then when Peggy left Laurel all the Garrison holdings, she had a whole new set of problems. We always think that if a person inherits a fortune their life will be perfect, especially if it’s someone who’s been poor—like Laurel Selene. But it almost never works out that way. Well, you two should know that more than anyone.

Myrtis: Excuse me, I think we all need to remember that Peggy and I are not the ones being interviewed. Now, getting back to the first question, it seems to me that what you’re saying, Louise, is that several people helped you decide to write The Ladies of Garrison Gardens.

Louise: Absolutely. And I like that part of the writing process—that a person can say something to you or ask you a certain question and that sparks a whole new book.

Louise: It’s totally random. That’s what makes it exciting. You don’t know where the ideas are going to come from. It’s still a new way of working for me, because television, which was where I worked before, is a very structured environment. At least, it was on my level, so I love this. Athough I have to admit that I was nervous about The Ladies of Garrison Gardens.

Louise: A friend of mine calls it Second Book Syndrome. People had liked The Three Miss Margarets and you’re afraid that you can’t do it again, or maybe someone won’t like the way you’re letting the characters develop, or . . . something. The funny part is, the things that worried me haven’t bothered anyone else.

Peggy:Why did you decide to write about Miss Myrtis? She only appeared in The Three Miss Margarets very briefly.

Louise: That was part of the reason—I don’t like sequels that are too linear. Plus, she seemed so buttoned down and . . .

Myrtis: Icy? I think that’s the word you’re looking for.

Peggy: She gets that a lot.

Louise: Actually, I was going for remote, but icy’s good. And I wondered how you got that way, Myrtis. That meant figuring out your childhood. I don’t think we ever get away from the early years. Especially women, because we adapt so much to the circumstances around us when we get older—at least we do on the surface.

Myrtis: So that’s another legacy—what we get from our own past.

Louise: And what we do with it—or try to do with it. In The Ladies of Garrison Gardens, even Stuart Junior, the lawyer who makes things so rough for Laurel, is only trying to take care of what he thinks is his legacy.

Louise:Well, yeah. But he’s got issues.

Peggy: One of which is, he’s a jerk. The way I heard it, a lot of people wanted you to have a scene in which Laurel tells him off. Why didn’t you?

Louise: Because I think Laurel has grown up enough to know that it would be counterproductive to alienate any of the guys who’ve been running the gardens and the resort—even though it might be fun. If suits want to stay on and work for her without any of the perks, she’ll be glad to have them. They’re good at their jobs, even if they are greedy. And she knows she has a lot to learn. Personally, I think the only exec who will stick around is the one who bought the hot rock massages for his mistress.

Peggy: And he’s already getting his perks.

Myrtis: Peggy, please. Next question: What about Perry?

Myrtis: If we must call him that. How did he come about?

Louise: I think Laurel has to have someone who knew her when she was down and out and saw the good in her anyway. She’s not going to trust anyone else. And I like the whole idea of a Cinderella guy who goes away from home as a mess and comes back gorgeous and smart and loving.

Peggy: Do you think Laurel is ready for him?

Louise: I hope so.

Peggy: Now we get to the biggie. So many of your readers wanted the letter to be delivered to Laurel so everyone could know Myrtis’s secret.

Louise: I’d never do that.

Louise: Because it would be too pat and too simple. I believe that the past keeps its secrets and we never know what we think we know—especially when it comes to an icon like you, Myrtis. But I also think without knowing it, we are handed the unfinished business of previous generations. That’s why Laurel is going to try to bring about all of Myrtis’s hopes and dreams for the gardens and the resort. And she’s going to fill the house that Myrtis and Peggy lived in without much happiness with kids and life and love. Or, at least she’s going to give it her best shot.

Myrtis: I think you just answered the question of why you chose to have us interview you. It’s our legacy Laurel is living out.

Myrtis: And that wraps up all of our questions.

Louise:Thank you. This was fun. In a very strange way.

Peggy: I have one more thing for you. I understand that your husband is really upset that you had Laurel trade the Viper for an earth-friendly car. He says it was a prissy thing to do.

Louise: Does he? Well, you can tell him for me that it’s a question of maturity—which some people can understand.

Peggy: Maybe, Sugar, but it was awfully prissy.