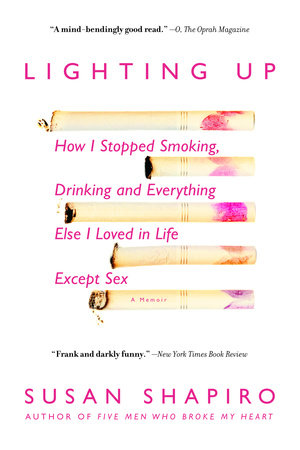 In her critically acclaimed debut, Five Men Who Broke My Heart, Susan Shapiro revisited her self-destructive relationships. In Lighting Up, she takes on another brand of self-destruction: her addictions, ranging from cigarettes to carbs to chewing gum. Writing with the candid, bitingly funny voice that has become her hallmark, Susan recalls her road from vice to victory–with plenty of edgy detours along the way.

A two-pack-a-day smoker since the age of thirteen, Susan married a man who hated her penchant for puffing away. Just when she thinks she’ll have to choose between Aaron and nicotine, she visits Dr. Daniel Winters, "the James Bond of psychotherapy," who is a former chain-smoker himself. Though his personality is intense and his methods seem unorthodox, he soon has Susan cutting back, not only on cigarettes but also candy (which she started eating in response to her cigarette cravings), booze, pot, spending, and even freelance writing gigs.

Working his weird magic on her psyche, he unravels the roots of her compulsions, including the same dangerous nicotine dependency that haunted her father. Dr. Winters eventually proclaims that Susan’s panic, depression, insecurity, vulnerability, and wild mood swings win her the award for "the worst nicotine withdrawal in the history of the world." Yet even as she sees her life improving on all fronts–including landing the book deal she had dreamed of for years–she begins to realize that her addiction to Dr. Winters may turn out to be her toughest habit to kick. Funny and wise, Lighting Up will hook you from the first scene.

The questions, discussion topics, and author biography that follow are intended to enhance your reading of Susan Shapiro’s Lighting Up. We hope they will enrich your experience of this highly addictive memoir.

1. What was your first reaction to Dr. Winters? What did he see in the relationship between Aaron and Susan that they had trouble recognizing on their own?

2. Was Claire the "tipping point" that made Susan decide to try to quit smoking again? What brings most addicts to the point of seriously wanting to quit? Why do you suppose Dr. Winters was so quick to dismiss the reasons Susan initially gave?

3. Early on, Susan tells Dr. Winters that she feels as if the things she wants most are the things she can’t get. Then she surprises herself by telling him that getting published is what she wants most. Discuss this relationship between addictions and creativity. What does Lighting Up indicate about the romantic stereotype of writers whose brilliance relies on their addictions?

4. Susan comes to believe Dr. Winters’s claim that "Underlying every substance problem I have ever seen is a deep depression that seems unbearable." What proves to be the source of Susan’s depression? Do you agree with his belief that addiction-cessation programs won’t deliver lasting results if they don’t address underlying psychological issues?

5. Susan is proud of her abilities as a teacher; she is dedicated to her students and is constantly helping to advance their careers. Is she able to admit this readily? Why does she initially want to cut back on teaching rather than freelancing? Does her teaching personality extend to her personal life–her interactions with Aaron, her family, and her friends?

7. Three men have especially prominent roles in Lighting Up: Aaron, Dr. Winters, and Susan’s father, whose Chesterfields she recalls vividly. Do these three figures have much in common? Do they complement various parts of Susan’s identity? What bonds her to each of them?

8. What accounts for Blake’s crisis? Does his experience mirror episodes in Susan’s life, or does he represent a risky place to which she would never venture?

9. Susan tells the story of her botched joint shipment with perfect deadpan humor. Why do you suppose she hadn’t realized she was addicted to pot, and hadn’t anticipated how hard it would be to do without the dealers after she coated their phone numbers in white-out?

10. Did it affect Susan for better or for worse when Dr. Winters let her in on his childhood and personal life? How was their doctor/patient relationship affected by her ability to generate media coverage for him? Should therapists conceal their private lives from their patients?

11. How would you have responded to Dr. Winters’s scheduling snafus? How did Susan react when Irene said she had stopped seeing Dr. Winters because she found him to be too sexist?

12. What determines whether we take advice or ignore it? Why was Susan willing to follow Dr. Winters’s tough instructions, while other patients dropped out of therapy? Who were the other healers in her life, such as poet Joseph Brodsky? What is the significance of Susan’s brief period of treatment with Dr. Steiner?

13. What did you make of the conservatism Susan describes as she becomes less dependent on substances? As her perceptions of the world and herself change, what realities remain?

14. Discuss the scenes in which Susan faces large family gatherings. What are the stressful aspects of her family dynamic? What parts of it are comforting?

15. As Susan anguished over her author photo, what fears became apparent? When she became upset with Aaron over the envelope from Naomi, were similar fears emerging? What is Dr. Winters’s approach to feelings like these?

16. The book’s subtitle is a reminder that sex remained Susan’s only source of intense pleasure. How does the role of sex evolve throughout Lighting Up?

17. What does Lighting Up indicate about the role of writing, particularly humorous writing, in processing difficult aspects of life?

18. What parallels did you find between Lighting Up and Shapiro’s earlier memoir, Five Men Who Broke My Heart? Were the changes taking place in Susan’s life reflected in the storytelling tone of the two works?

Learn More About Lighting Up
print

The Uncertain Art
Sherwin B. Nuland

The Answer to How Is Yes
Peter Block

The House That Race Built

Through the Brick Wall
Kate Wendleton

The Promise of Forgiveness
Marin Thomas

We Are Not Refugees
Agus Morales

The Case for Withdrawal from Afghanistan

Mark of the Lion
Suzanne Arruda

Not Without Laughter: A Novel
Langston Hughes

The Wisdom to Know the Difference
Eileen Flanagan

Love by the Glass
Dorothy J. Gaiter and John Brecher

And This Too Shall Pass
E. Lynn Harris

If This World Were Mine
E. Lynn Harris

Life in the City of Dirty Water
Clayton Thomas-Muller

Not Exactly What I Had in Mind
Rosemary Breslin

The Man Within My Head
Pico Iyer

The Lives Our Mothers Leave Us
Patti Davis

George, Being George
Back to Top