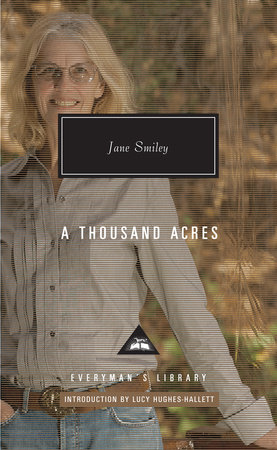 1. Discuss how the symbiotic relationship between person and place addressed in Ms. Smiley’s choice of epigraph plays itself out in the novel? How does setting shape character? Character shape setting? Which seems to have the upper hand? How is Zebulon County itself a major character in A Thousand Acres?

2. What are the strengths and weaknesses of Ginny’s narration? Is she able to maintain clarity and candor throughout her chronicling of events? What gets in the way? Is she as forthcoming in discussing herself as she is in discussing others? Why or why not? How would the novel differ if told from the perspective of Rose, Caroline, Jess, or Larry?

3. At the outset of the novel, Ginny confesses that retrospection has not revealed too much about the drama that unfolded when her father decided to hand over the farm to Rose and her and leave out Caroline. “I’ve thought over every moment of that party time and time again, sifting for pointers, signals, ways of knowing how to do things differently from the way they got done,” says Ginny. “There were no clues.” To what extent does the story that she then tells undermine this claim? What remains a mystery despite her scrutiny?

4. What are the most tragic elements of A Thousand Acres? From what do they arise? Which of these elements are rooted in the exercise of an individual will, and which seem attributable to something beyond the scope of human volition? Where does the novel ultimately come down on the enduring fate-versus-will dilemma?

5. What do you see as Ms. Smiley’s debt to Shakespeare’s King Lear? Where do the two works part ways? What provides A Thousand Acres a certain autonomy despite its borrowed plot and characters?

6. Which of the issues explored in A Thousand Acres are unique to rural life in America? Which resonate regardless of geography? What does the novel reveal about variations and consistencies in the so-called American character?

7. Passion appears in many guises in A Thousand Acres; discuss them. What seems to lie at the root of each? Which do the most damage? Why do some yield to a desire for authority, acreage, or another, while others resist such temptations? Is there greater freedom in following passion or in checking it? What does the novel teach us about the nature of passion, restraint, and indulgence?

8. The interior lives of Caroline as well as Larry remain relatively unexamined compared to those of Rose and Ginny, their spouses, and Jess. What is the dramatic and thematic significance of keeping these characters somewhat shadowy?

9. Contemplating her father’s momentous decision, Ginny marvels at its apparent rashness. “He decided to change his whole life on Wednesday!” she exclaims.” Objectively this is an absurdity.” Her remark points to the rich interplay between chance and well-laid plans that appears throughout A Thousand Acres. How does the deliberate and daily work of generations stand up against the vicissitudes of the natural world and the whims of human nature? What kind of solace and safety, if any, do seasonal chores and rituals provide?

10. Discuss the myriad ways that motherhood–and fatherhood– are weighed in the novel. How does Ginny’s ineluctable desire to give birth shape her view of her present and past? What meaning does she locate in the many surrogate-maternal roles she plays? In what ways is her mother’s long absence a constant presence?

12. Is there a particular politics or ideology at work in A Thousand Acres? What is it? Does construing the novel in terms of, say, feminism limit or enlarge it? What do you see as the novelist’s responsibility vis-a-vis politics? Does this work fall closer to agenda or inquiry?

13. “The first novel I ever knew was my family,” writes Ms. Smiley in an afterword to a collection of essays on family by contemporary American writers. “We had every necessary element, from the wealth of incident both domestic and historical, to the large cast of characters. We had geographical sweep and the requisite, for an American novel, adventure in the West.” Discuss A Thousand Acres as a meditation on family. On what dark corners of its dynamic character does the novel shed light? How are the Cooks both anomalous and representative of American families? What explains their tragic dissolution? What could have prevented it? How does sexual abuse factor into the equation?

14. What are the benefits and drawbacks of presenting the novel as one long look back?

15. Ginny is stilled by the disturbing thought that her own “endurance might be a pleasant fiction allowed [her] by others who’ve really faced facts.” Is it? Do you construe her story, i.e., the novel, as flight from a difficult reality or a means of confronting it? Why?

16. During a game of Monopoly, Jess describes Harold as someone who is “cannier and smarter than he lets on,” then suggests that real freedom exists in “the slippage between what he looks like and what he is.” Discuss how the relationship between appearance and reality defines the arc of the novel’s action and the meaning and direction of its characters’ lives. What kind of importance does Ms. Smiley assign this relationship?

17. In what reads like a muted epiphany, Ginny, after time in her garden, considers the constant weight and absence of her mother’s death before realizing that one reaches a point where “relief is good enough.” Do you read this remark as an expression of resignation or a spirited acceptance of true trial? Why?

18. In a candid conversation with Rose, Ginny voices her inability to understand her father’s abuse of them, despite Rose’s insistence that the matter is a simple case of “I want, I take, I do.” Says Ginny, “I can’t believe it’s that simple.” Rose’s response: “If you probe and probe and try to understand, it just holds you back.” What does this exchange reveal about the limitations of reason? About the possibility or impossibility of true catharsis? What options exist when the rational is exhausted? Is faith considered? If so, faith in what?

19. Ms. Smiley now regrets that her novel, like Shakespeare’s Lear, precludes the possibility of forgiveness–of a love not limited to a selfish exchange. Do you share her regret? Why or why not?
Learn More About A Thousand Acres
print
Back to Top