The Second Summer of the Sisterhood Reader’s Guide 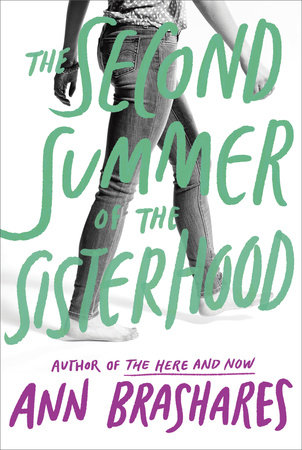 The Second Summer of the Sisterhood Reader’s Guide

print
The Second Summer of the Sisterhood Reader’s Guide

With a bit of last summer’s sand in the pockets, the Traveling Pants and the Sisterhood that wears them embark on their 16th summer.
Bridget: Impulsively sets off for Alabama, wanting to both confront her demons about her family and avoid them all at once.
Lena: Spends a blissful week with Kostos, making the unexplainable silence that follows his visit even more painful.
Carmen: Is concerned that her mother is making a fool of herself over a man. When she discovers that her mother borrowed the Pants to wear on a date, she’s certain of it.
Tibby: Not about to spend another summer working at Wallman’s, she takes a film course only to find it’s what happens off-camera that teaches her the most.

1. The novel opens with a first-person narrative by Lena. Why do you think the author selected this character to frame the story? If you could change it, would you select another character, and if so, what would he or she say?

2. Self-destructive and hurting, Bridget impulsively decides to journey to Alabama and conceal her identity from her estranged grandmother. “She didn’t look like Bee Vreeland. Who said she had to be her?” (p. 21). Have you ever wished you could be someone else? How does posing as Gilda help Bridget learn to be comfortable in her own skin?

3. Each of the girls is embarrassed by her mother (or mother figure)–Carmen by Christina’s new romance, Lena by Ari’s Greekness, Tibby by Alice’s Mozart-playing cell phone and diaper-wipe-trailing shoes, and Bridget by Greta’s life, “so small, and so simple, and so completely unremarkable” (p. 280). In turn, each girl does something to embarrass her mother, with behavior that is often cruel. How could the girls have handled their situations differently? By humiliating their mothers, what do the girls of the Sisterhood learn about themselves?

4. Tibby gets caught up in trying to appear cool and sophisticated in front of Alex and Maura. “She wondered. Had she not brought Brian because she was worried about how he would seem to Alex and Maura? Or was it because she worried about how she, Tibby, would seem to Brian?” (p. 105). Do people judge you by the company you keep? Sometimes people rebuff the ones they love . . . why do you think Tibby pushes Brian away? If you were Brian, would you give up on Tibby? Why or why not?

5. In The Sisterhood of the Traveling Pants, Tibby’s friend Bailey is the only one outside the Sisterhood who wears the Pants. In The Second Summer of the Sisterhood, Christina has that role. Carmen notes (p. 156), “The sick thing was, Christina looked beautiful in the Pants, slender and young. They fit Christina. They loved her and believed in her just as they’d loved Carmen last summer, when Carmen had been worthy of them. This summer they eluded Carmen. Instead, they chose her mother.” And on Bridget’s fifth day in Alabama, the Traveling Pants arrive–and they don’t fit her anymore. What is the emotional impact of these incidents on Carmen and Bridget? Is there a larger issue at play?

6. Epigraphs (short quotations) from a variety of sources–song lyrics, remarks by real-life personalities, fictitious sayings by the novel’s characters–are used to separate sections of the book. Which one is your favorite, and why?

7. Lena loves being in Carmen’s kitchen. “It felt safe and contained” (p. 81), and the food is comforting as well. Do you have a favorite place that makes you feel protected and secure? How do people make a place special?

8. Does Bridget find what she’s looking for in Alabama? How does spending time with Greta teach her about Marly? How is Bridget changed by this experience?

9. Ari tells Lena intimate details of her love affair. Do you think Lena is prepared for such information? Is it better for parents to shield their children from some of their own experiences–or do you think sharing them can help prevent heartache? On page 345, the narrator writes, “Lena was starting to need to go back to being the daughter again.” Have you ever been the recipient of knowledge that you didn’t feel equipped to handle?

11. Is Kostos a man of honor or a coward? How do you view his behavior? Lena broke up with Kostos–is she justified in thinking, “But that didn’t mean you were allowed to stop loving me” (p. 193)?

12. Carmen and Lena remain at home for most of the novel. Do you think the girls’ friendship would be stronger if all four girls were together? Or do you believe Lena, who tells us in the prologue (p. 4), “We didn’t realize that we are bigger and stronger and longer than the time we spend together”?

13. At the end of the novel, the remaining original Septembers–Alice, Ari, and Christina–are reunited. What does this teach the girls of the Sisterhood? Think about the women in your own life–mothers, grandmothers, aunts. Can you imagine their having a life before you?

Learn More About The Second Summer of the Sisterhood
print

Girls in Pants: The Third Summer of the Sisterhood
Ann Brashares

Forever in Blue: The Fourth Summer of the Sisterhood
Ann Brashares

The Truth About Forever
Sarah Dessen

The Unlikely Hero of Room 13B
Teresa Toten

Along for the Ride
Sarah Dessen

The Realm of Possibility
David Levithan

What Happened to Goodbye
Sarah Dessen

The Voice on the Radio
Caroline B. Cooney

This One Time with Julia
David Lampson

Rules of the Road
Joan Bauer
Back to Top