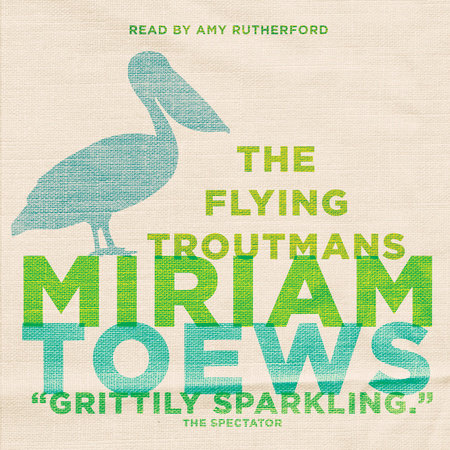 In this completely captivating book, Miriam Toews has created some of the most engaging characters in Canadian literature: Hattie, Logan and Thebes are bewildered, hopeful, angry, and most of all, absolutely alive. Full of richly skewed, richly funny detail, The Flying Troutmans is a uniquely affecting novel.

Days after being dumped by her boyfriend Marc in Paris – “he was heading off to an ashram and said we could communicate telepathically” – Hattie hears her sister Min has been checked into a psychiatric hospital, and finds herself flying back to Winnipeg to take care of Thebes and Logan, her niece and nephew. Not knowing what else to do, she loads the kids, a cooler, and a pile of CDs into their van and they set out on a road trip in search of the children’s long-lost father, Cherkis.

In part because no one has any good idea where Cherkis is, the traveling matters more than the destination. On their wayward, eventful journey down to North Dakota and beyond, the Troutmans stay at scary motels, meet helpful hippies, and try to ignore the threatening noises coming from under the hood of their van. Eleven-year-old Thebes spends her time making huge novelty cheques with arts and crafts supplies in the back, and won’t wash, no matter how wild and matted her purple hair gets; she forgot to pack any clothes. Four years older, Logan carves phrases like “Fear Yourself” into the dashboard, and repeatedly disappears in the middle of the night to play basketball; he’s in love, he says, with New York Times columnist Deborah Solomon. Meanwhile, Min can’t be reached at the hospital, and, more than once, Hattie calls Marc in tears.

But though it might seem like an escape from crisis into chaos, this journey is also desperately necessary, a chance for an accidental family to accept, understand or at least find their way through overwhelming times. From interwoven memories and scenes from the past, we learn much more about them: how Min got so sick, why Cherkis left home, why Hattie went to Paris, and what made Thebes and Logan who they are today. 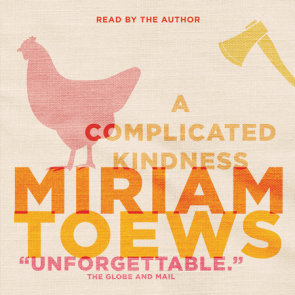 See all books by Miriam Toews

Miriam Toews is the author of seven bestselling novels: Women Talking, All My Puny Sorrows, Irma Voth, The Flying Troutmans, A Complicated Kindness, A Boy of Good Breeding, and Summer of My Amazing Luck, and one work of non-fiction, Swing… More about Miriam Toews

“Toews’s writing is a unique collision of sadness and humour. . . . The Flying Troutmans is a dark story but it is also a never-ending series of hilarious adventures.”
—Ottawa Citizen

“It’s darkly funny, bursting at the seams with quirky characters and off-kilter pop culture references that rival Douglas Coupland’s for their incisive wit.”
—The Vancouver Sun

“Toews may have invented a new genre, the romantic-depressive comedy, at which she excels.”
—Toronto Star

“Toews has a terrific ability to capture the mix of irony and innocence in a smart child’s mind. . . . She balances heartbreak with laugh-out-loud wit.”
— Edmonton Journal

“Toews writes . . . in a high-energy original voice filled with love, fear, humour and originality. . . . Miriam Toews is an extraordinarily gifted writer, one who writes with unsentimental compassion for her people and an honest understanding of their past, the tectonic shifts of their present and variables of their future.”
—The Globe and Mail

Why did you decide to write a book about a road trip, and what do road trips mean to you?

Road trips are one of my favourite things in this world and I’ve been on many. I’ve always wanted to write a book about a road trip, but it never really came together in my head. And I would get busy writing other stories. But being on the road–years ago I was on the road with my family more than I am now–everything’s changing, everything’s rushing past you. You’re on the move, you’re on the go, and every situation is different and challenging and exciting. The road trip is just something that inspires me, too, in terms of my writing. It’s always sort of intimidating, because it’s easier to write a novel that’s set in one specific place (one family in one town, that sort of thing) because then the stage is set and you deal with that. On a road trip, everything is changing so the writing has to reflect that, and that’s just a little bit more difficult.

How long did it take you to write this novel?

I don’t know, two or three days? No, I’m just kidding. It took me several months, maybe a year.

Can you tell me a bit about the title, The Flying Troutmans?

The name of the family is the Troutmans, they’re the Troutman family. They’re on a road trip. The boy in the family, his name’s Logan, he’s fifteen years old, he has a habit of carving things into the dash of the van or writing things with his sharpie. Towards the end of the book he signs “The F-ing Troutmans” on the dash and his younger sister, Thebes, who doesn’t like swearing, changes it. She puts in the l and the y so that it’s “The Flying Troutmans” and then it’s more palatable for her. And there are also other reasons. It’s a family that is sort of on the run, their flying in more ways than one. It also sounds kind of circusy to me in a way–it’s a family that’s kind of catching each other before they fall, sometimes missing, sometimes being there.

To what extent are the kids in this novel similar to your own?

Well, they are in some ways, and then again, they aren’t in other ways–like most fictional character. They’re loosely based on my own kids in terms of the details, like the music, or the habits, or the ticks, speech patterns or concerns. But it’s all fictional, they’re characters. Logan and Thebes are following a certain past, and there’s a structure to the story and that story’s a story that isn’t really the story of my own kids’ lives–they haven’t dealt with all the stuff that the kids in the novel are dealing with. So, yeah, there are similarities, and there are things that are completely, not at all the same.

There are a lot of lost fathers in the body of work of Miriam Toews–why is that?

Yeah, I guess that’s pretty obvious. Well, my own father committed suicide. He left. And there are other fathers that I know of, either in my own family or close to my family, that are just sort of indifferent, and in significant and rather profound ways, they disappeared–whether it’s literally and they go to another end of the planet, or whether they just kind of disappear within the home itself.

There are so many wonderful characters in the novel. Who’s your favourite character?

I think, well, both of the kids. It was just a lot of fun writing those parts. I don’t think I have a favourite character yet. I haven’t done any readings from the book–it’s new, it hasn’t even come out yet. So maybe when I actually start actually reading from it something will stick.

The mother in the novel, the mother of Logan and Thebes, has a significant breakdown. How would you characterize that breakdown?

How hard was it for you to write about her and her breakdown?

It was difficult because that type of breakdown, it’s so hard to understand, I think, in terms of what the person is going through and what causes something like that to happen. You could ask a whole bunch of different people–you could ask psychiatrists, doctors and just regular “folks”–about how that kind of thing happens and what causes it, but it’s so mysterious, often to the person that it happens to, but even to the people that it happens around, and even to the professionals. Mental illness, breakdowns–those are horrible things to witness and horrible things to go through.

What is it like following up on the success of A Complicated Kindness?