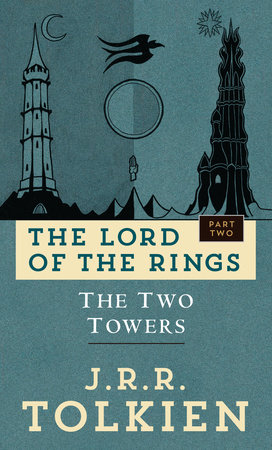 The Two Towers begins with Book III in the Lord of the Rings trilogy. Boromir had just tried to take the Ring from Frodo. Frodo decides to take the burden of the Ring to Mount Doom by himself and not endanger the entire fellowship, but before he escapes Sam finds him and insists on going, too. The Two Towers follows the two paths taken by the members of the fellowship: Frodo and Sam go south to Mordor, and Aragorn, Gimli, and Legolas pursue the Orcs who have Merry and Pippin hostage.

Book III begins with the separation of the Fellowship as Merry and Pippin are taken prisoner by the Orcs. The remaining three members of the fellowship decide to pursue Merry and Pippin and the rest of the book switches back and forth between the hobbits and the men trying to rescue them. In Chapter 9, the company is reunited at the gates of Isengard. The hobbits are responsible for raising the army of Ents and Huorns by explaining the recent history to Treebeard, while the men fight victoriously at Helm’s Deep with the Riders of Rohan. This is the first battle of the war against the dark lord, Sauron, but with the return of Gandalf, there is hope.

1. Boromir succumbed to the power of the Ring when he tried to take if from Frodo by force. This action breaks the fellowship. Why was his physical strength not enough to take the Ring from the hobbit? What is his punishment? Does he understand his punishment?

2. Why does Aragorn decide to follow the Orcs and Merry and Pippin? And what does he find that convinces him he has made the correct decision?

3. Who are the Riders of Rohan and what are they doing so far away from their homeland? How do they give Aragorn hope? What do the riders give them?

4. When Eomer laughs at the ideas of halflings as something from legend, Aragorn introduces the idea of storytelling. "For not we but those who come after will make the legends of our time." What does Aragorn mean? Is he correct?

5. "Good and ill have not changed since yesteryear; nor are they one thing among Elves and Dwarves and another among Men." What does Aragorn’s quote tell you about him? Are things better or worse now than they were in the old days?

1. Pippin and Merry’s journey with the Orcs is grueling and dangerous, but the hobbits take several chances that end up saving their lives. What chances do they take?

2. Both Uglúk and Grishnákh want to take the hobbits back to their master, but both also have different plans. Which is better?

3. How do Pippin and Merry trick Grishnákh with the use of the Ring? What has Pippin done — and concealed from the Orcs — that allows him to get free?

4. Who is Treebeard and where does he take the hobbits? Even though Treebeard’s motto is "Don’t be hasty," what does he decide to do? What do the hobbits see as they march toward Isengard?

1. Who returns to Aragorn, Gimli and Legolas in Fangorn? What does the old begger tell them? Saruman’s double treachery is that he wants to have power over the men of Minas Tirith and he wants the power of the Ring for himself. Was Saruman always evil? What does Gandalf say about the leader of the Council?

2. At the mention of Balrog, Gandalf says, "Name him not!" What power is there in a name and/or a word? Who saves Gandalf and where did he save Gandalf from at an earlier time? Who is helping Gandalf now?

3. Why is the company detained at the gates of the Golden Hall and what must they leave at the door? Whose rule is it that all who enter must be unarmed? In what condition is the king when the company enters the hall and how does he change during their visit?

4. Wormtongue is the most obviously named character in the trilogy. What makes him so wicked? What options does Gandalf give him as the Men of Rohan prepare to fight?

5. Eowyn is left in charge of Theoden’s people. Who is she? What will she be responsible for in the absence of the king?

1. What is Helm’s Deep, who is there and how does it help the men of Rohan?

2. Why does Gandalf leave the men of Rohan? Where does he go?

3. Who does Saruman send to fight at Helm’s Deep?

4. After surviving the battle in the night, what do the riders see below Helm’s Gate? Who appears to help them?

5. Gandalf leads a small party of men to Isengard. What do they see along the way? What do they find once they arrive at the walled fortress? Who is protecting the gates of the city?

Chapter 9–Flotsam and Jetsam, Chapter 10–The Voice of Saruman & Chapter

1. What seems peculiar to Aragorn about the hobbits? Who are the Huorns and how have they helped the men and Ents?

2. What mistakes does Saruman make? How is the spell of Saruman’s voice broken?

3. Gandalf reveals his new strength to Saruman and to the company. What offer does he make to Saruman?

4. Gandalf learns that the globe has been the key communication tool between Isengard and Mordor. How does this help the company?

Book IV goes back in time to the separation of the fellowship and follows Frodo and Sam in their attempt to reach Mount Doom in Mordor. Gollum, or Smeagol, makes a pact with Frodo to be a guide into Mordor. Frodo and Sam need Gollum because he knows the way, but they also know the potential for his treachery because of his desire to obtain the Ring again. Along the way, Frodo meets and makes friends with a rebel band of men led by Faramir, Boromir’s younger brother. Frodo and Sam are at the mercy of Gollum’s plan to lead them to Cirith Ungol and Shelob, the spider giantess, but he is their only hope having been in Mordor and escaped (or was he allowed to escape?) After passing many tests of courage and strength, the hobbits enter Shelob’s lair and find they have several weapons with which to defeat the hunger arachnid. After the victory, Sam thinks Frodo has been killed and chooses to carry the burden of the Ring to Mount Doom himself. When he learns from the orc leaders that Frodo is not dead, he chastises himself for making the wrong decision when actually, he saves the Ring and keeps it from Sauron by becoming the Ring Bearer for a brief time. Sam’s choice allows the Ring to enter Mordor undetected.

Chapter 1–The Taming of Smeagol, Chapter 2–The Passage of the Marshes &

Chapter 3–The Black Gate is Closed

1. As Frodo and Sam begin their journey, what item from the Elves helps? How does the fight between Sam and Gollum end? What deal do Frodo and Gollum make?

2. Why do Frodo and Sam decide to follow Gollum through the Dead Marshes? What do they see in the marshes, and what happens to frighten them even more?

3. With the Black Gate heavily guarded, which way does Gollum suggest? What
new enemy appears that weakens their hope?

Chapter 4–Of Herbs and Stewed Rabbit, Chapter 5–Window on the West & Chapter 6–The Forbidden Pool

1. Who finds the hobbits and what is this group about to do? What does Sam see that he thought was just a myth?

2. Who is Faramir and what does he know about Boromir? With Faramir’s trust, Frodo and Sam are led the secret camp. Faramir’s family claims stewardship of Minas Tirith.

3. How does Frodo trick Gollum and protect him? What does Frodo decide is his only hope?

1. There is an eerie silence as Frodo, Sam and Gollum begin to climb into the mountains to reach Cirith Ungol. What do they hear? What does Frodo see lying on the ground that gives him hope?

2. What is the reaction of each character when he sees the city of the Ringwraiths? Gollum leads them out of the path of the marching army, but who stops and senses something after crossing the bridge?

3. What change might the hobbits have seen had they been awake after the Straight Stair? What does Sam accuse Gollum of doing?

1. What does Sam remind Frodo of in the tunnel? What does Frodo say that seems outside of himself? How do they get Shelob to retreat? What was Gollum’s plan all along? Who wins the fight between Gollum and Sam this time?

2. In what condition does Sam find Frodo? How does Sam wound Shelob? What two items does Sam take from his master? Sam remembers looking into Galadriel’s glass and seeing Frodo sleeping. What does he think now about Frodo’s condition?

3. How does Sam elude the Orcs? What do the Orcs take and what does Sam learn from them?

1. When Merry and Pippin are forced to run with the Orcs it is a reminder of the history of cruelty and suffering by one group of people on another. Discuss the suffering of ethnic groups at the hands of their oppressors–the Jewish Exodus, the Huguenots, The Trail of Tears, Nazi death marches, marches in the Philippines, the reign of Mao in China and most recently the struggles in the Balkans. The goal is to demoralize, dehumanize and weaken the perceived enemy. What stories return? What do we learn from these about the human ability to dole out cruelty and to endure suffering?

2. Design your own fortress. Think of the design of Minas Tirith, Isengard, Helm’s Gate and Mordor.

3. Frodo and Sam get into a conversation about how stories get told and why they are passed on. "I expect they had lots of chances, like us, of turning back, only they didn’t. And if they had, we shouldn’t know, because they’d have been forgotten." (p. 378) What about this conversation allows the reader to step out of the immediacy of the story and see it as a story that has happened and is now being told? What events do we chose to remember? Which are forgotten? Look for current events in recent newspapers. What stories will stay with us? What stories won’t? Why?

To the Lighthouse
Virginia Woolf

Jo’s Boys
Louisa May Alcott
Back to Top