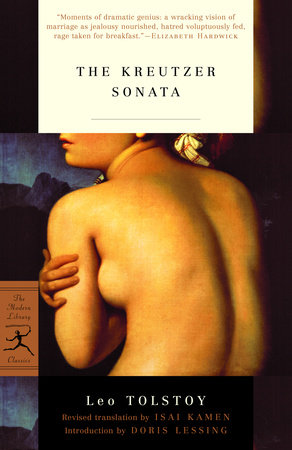 1. The publication of The Kreutzer Sonata was a significant intellectual event around the world. Its publication, at the beginning of the 1890s, set off an explosive debate in Europe, America, and Asia on matters that were then called the “sexual question” and the “woman problem.” Its provocative rejoinders to these debates stirred widespread condemnation from all sides, as well as fervent admiration. Moreover, almost everywhere (including the United States), The Kreutzer Sonata was censored or forbidden as “indecent literature.” Put yourself into the shoes of the average reader in the 1890s. What do you think people found offensive or indecent about Pozdnyshev’s views? How has the time between the novella’s initial publication and the time that you are reading it changed the ways in which readers react to the ideas? Which of Pozdnyshev’s views on women’s rights, sex, marriage, and love are still relevant? Which are irrelevant?

2. It has often been noted that Tolstoy, like many other nineteenth-century novelists, constantly returned to the problem of free will in his works. That is to say that Tolstoy examined and illustrated the context and process of ethical decision making, asking to what extent circumstances influence our choices, and to what extent our actions are unconstrained by circumstances. The Kreutzer Sonata deals with this question of free will in Pozdnyshev’s explanation to the curious narrator as to why he murdered his own wife. To what extent does Pozdnyshev take responsibility for the murder? Who else shares guilt? How convincing is Pozdnyshev’s explanation for how and why the murder happened?

3. The novella’s first epigraph is Christ’s injunction against looking lustfully, from the Sermon on the Mount: “But I say unto you, That whosoever looketh on a woman to lust after her hath committed adultery with her already in his heart” (Matt. 5:28). Why would Tolstoy choose, as an epigraph to a novel entitled after a work of music, a biblical verse that deals directly with the act of looking? In what ways does the novella reflect the concerns of the epigraph?

4. In The Kreutzer Sonata and other works by Tolstoy, especially those he wrote after his religious conversion in the 1870s, one frequently finds statements that have been described as “flagrantly misogynistic.” However, at the time of its publication, Kreutzer Sonata was viewed by many supporters of the women’s-rights movement as supporting their cause movement as supporting their cause, especially the remarks Pozdnyshev makes about child care, pregnancy, and sexual inequality. Moreover, later critics have noted that Pozdnyshev’s views have much in common with feminist critiques from the 1960s and 1970s. For example, Pozdnyshev remarks, “Well, and now they emancipate woman, they give her all the same rights as man, but they still regard her as an instrument of enjoyment, so they educated her, both in childhood and later by public opinion, with this end in view. But she remains the same depraved slave as ever before. . . .” Discuss Tolstoy’s (or, perhaps more correctly, Pozdnyshev’s) views in the context of your own experience and knowledge of feminism and women’s rights movements. Is Tolstoy a misogynist? A champion of women’s rights? A radical or a conservative? What solutions does Tolstoy offer to the “woman problem”?

5. . The Kreutzer Sonata has often been criticized and dismissed for being “utopian,” as advocating impossibly ideal social and political schemes. What examples of utopianism can you find in the text?

6. In the Sequel to The Kreutzer Sonata, Tolstoy repeatedly makes reference to verses from the Gospels as evidence supporting his views. He claims to offer a more accurate interpretation of the intent of the New Testament and Jesus’ teachings than is offered by “official” Christianity. He argues, for instance, that the teachings of the Gospels forbid marriage, church services, priests, property, taxes, armies, courts, and government. Read the full text of the verses he cites (given in the endnotes to this edition, though you might also read other translations and redactions). How fair and accurate are Tolstoy’s conclusions? How does Tolstoy reconcile traditional Christian practice and interpretation with the literal text of the Bible?

The Honorary Consul
Back to Top