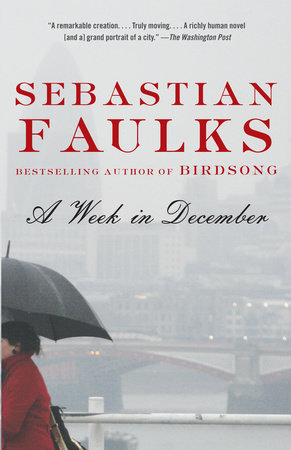 This masterful novel by Sebastian Faulks touches on so many issues that it can be difficult to know where to start the conversation.  The following questions should help guide you and your group through a very lively discussion about a world that moves faster and faster—and grows more overwhelming with each passing day.

London: the week before Christmas, 2007. Over seven days we follow the lives of seven major characters: a hedge fund manager trying to bring off the biggest trade of his career; a professional footballer recently arrived from Poland; a young lawyer with little work and too much time to speculate; a student who has been led astray by Islamist theory; a hack book reviewer; a schoolboy hooked on reality TV and genetically altered pot; and a Tube train driver whose Circle Line train joins these and countless other lives together in a daily loop.

With daring skill and savage humor, A Week in December explores the complex patterns and crossings of modern urban life; as the novel moves to its gripping climax, its characters are forced, one by one, to confront the true nature of the world they—and we all—inhabit.

1. In the novel’s opening scene, Gabriel prepares for two trials. One trial concerns the liability of Underground employees in a passenger’s suicide attempt. The other involves a Muslim girl who was not allowed to wear her traditional attire to school. How do these cases set the tone for the novel? What do they say about London society in the twenty-first century?

2. Compared to the other characters, does Jenni Fortune have the best or the worst job? How does she balance tremendous responsibility with a lack of freedom on her mechanized route? How does her identity as Miranda Star measure up to her true-life persona?

3. Sebastian Faulks provides essential details about the novel’s primary characters in the form of Sophie’s list. What does this commentary indicate about the way Sophie perceives her husband’s political circle, and her role in it? Is she naïve or perceptive?

4. What is the source of John Veals’s appetite for total control? How does his life as a hedge-fund manager reward him in ways that extend well beyond money? How had your impression of John changed by the time you reached the book’s final lines?

5. Why is religion closely linked to identity for Hassan but not so much for his parents? How do the jihadists define Hassan? Why is that definition appealing to him?

6. Ralph Tranter is one of the few characters who struggles financially. Is he in some ways happier than the others? If you could assign new salaries to some of the most memorable men and women in the book, how much would they earn? Who deserves to be rich? How do you personally define “rich”?

7. What does Finn need from his parents? Will Vanessa be able to heal him by herself? What was Finn hoping to experience with his purchase at the Garden of Remembrance: An escape? Or exhilaration?

8. What did it mean to Farook/Knocker to become an Officer of the Order of the British Empire? Was he selling out to an oppressor or simply reaping the rewards of life in a liberated country? What insecurities are evident as he preps for a chat about books?

10. Do the women in the novel have an advantage over the men? What fears and temptations do the characters have in common, regardless of gender or social status?

11. What is the tipping point for this cast of characters in terms of morality? How do they distinguish corruption from purity?

12. Though the author reminds us that A Week in December is entirely a work of fiction, it illuminates reality in a new way. What does the novel say about reality television, virtual worlds, and other aspects of modern reality?

13. Did John’s plan for Allied Royal Bank enlighten you about the global financial woes that have dominated headlines since 2007? How did the Information Age—with its rumor mills and day traders—make his plot possible? Would it be fair to call his actions a form of terrorism?

14. Love proves to be a powerful force in the closing chapters. What determines whether the novel’s characters are “immune” to love or open to it (both in terms of romance and familial love)?

Sebastian Faulks worked as a journalist for fourteen years before taking up writing full-time in 1991. In 1995 he was voted Author of the Year by the British Book Awards for Birdsong, his fourth novel and his second, following A Fool’s Alphabet, to be published in the United States. He is also the author of Human Traces, On Green Dolphin Street, Charlotte Gray, The Fatal Englishman, and The Girl at the Lion d’Or. He lives in London with his wife and three children.

Jonathan Franzen, The Corrections; Howard Jacobson, The Finkler Question; Claire Messud, The Emperor’s Children; Joseph O’Neill, Netherland; Tom Rachman, The Imperfectionists; Orhan Pamuk, The Museum of Innocence, Snow; Lionel Shriver, So Much for That
Learn More About A Week in December
print

Summer
Back to Top