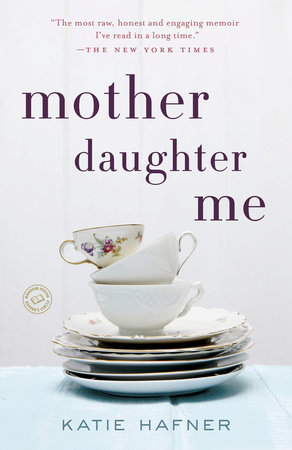 2. Hafner often finds herself in the middle of arguments between her mother and her daughter. Do you think it was possible for her to effectively mediate, while also working out her own difficulties with her mother?

3. Money plays a significant role in the book. Discuss why money can be such a flashpoint for families. Why do you think it was a point of contention in Mother Daughter Me?

4. Objects, such as the piano, also held great emotional significance throughout. Did the piano and other gifts carry different meanings for Hafner and her mother? How did their different understandings of the symbolism of those tangible objects lead to conflict?

5. Hafner is a longtime journalist who turned to memoir writing. How do you see her skills as a journalist employed in the writing of Mother Daughter Me?

Memory—and the presentation of memories—can be tricky when writing memoirs. Many of Hafner’s childhood memories emerge during sessions with the therapist Lia. Others surface when she finds letters and other documents from the past. How do you think Hafner handles the reliability of her own memories, especially from her early childhood? How do you think she handles the issue of memory when her recollections differ from her mother’s?

7. In its piece on Mother Daughter Me, the San Francisco Chronicle wrote of children of parents who drink, “While their parents black out and forget, they remember, and their memories, their stories, matter. More than assigning blame, this is Hafner’s point—and her memoir is a brave manifestation of it.” Do you agree with the writer? Do you think Hafner steers clear of assigning blame? To what extent do you think it is necessary make a parent confront the details of a difficult past?

8. After Hafner’s husband, Matt, dies suddenly, Hafner tells the reader, she quickly does everything wrong. Instead of waiting to make any big changes, she acts hastily and, as she admits, inappropriately. What is your opinion of Hafner’s hasty decision to make large life changes? Are you sympathetic?

9. Bob, the man Hafner starts to date during the year chronicled in the book, is an anchor of sanity and stability throughout the book. How do you think Hafner was able to let another person into her life in during this year of such chaos and tumult? What role did you see Bob playing as he entered the family?

10. Hafner discusses the difficulty that subsequent generations often have in not repeating the mistakes of their parents, especially when it comes to inflicting trauma on one’s children. Do you think Hafner succeeds in breaking the cycle of intergenerational trauma that her own mother was unable to break?

11. Hafner discusses the long-term effects of divorce on children, citing Judith Wallerstein’s book The Legacy of Divorce. Why do you think she chooses to discuss divorce at such length, when alcohol might seem to be the bigger problem?

12. Hafner’s father comes off as a complex, much-loved, but muted character in the book. Why do you think Hafner chose to keep him in the background of the narrative?

13. Do you think Hafner has created a balanced view of herself and her mother? Was she even in a position to do so? Are there examples of why or why not?

14. Why do you think the author’s sister had a life that was so deeply troubled, while Hafner herself, despite coming from the same background, was able to make different, healthier choices earlier in life?

15. Despite being in many ways a typical, occasionally difficult teenager, Zoë also shows herself to be surprisingly adult and insightful at times. What role do you think she plays in the choices that Hafner makes once Zoë’s grandmother comes to live with them?

16. Hafner describes in detail her relationship with her daughter, and the fierce attachment between the two. What do you think drew them so close? Does their bond add to the challenges they faced that year?

18. Toward the end of the book, Hafner states that instead of feeling the need to act as the constant pleaser and appeaser, she can finally “have relationships with all of the people that I love without having to connect the dots between them.” Does this insight seem like a good life lesson? Is there a contradiction in loving two people while knowing they may never reconcile? How does Hafner confront this question?

I am a greedy reader. That is, I gravitate toward books that help me articulate my own life experience, or help my own writing. When I read, I am on the lookout for inventive turns of phrase, for risks with language, for unlikely pairings of nouns and adjectives, verbs and adverbs. My self-centered reading habits are reflected in this list, as eclectic as it is inspiring.

Growing Up by Russell Baker

Russell Baker, the famous columnist, published his memoir in 1982. It was the first memoir I can remember reading, and it has stuck with me to this day. It’s easily one of the very best of the genre—a classic that all aspiring memoirists should read. Baker’s father died when he was five, and he was raised by his mother during the Depression. There isn’t an ounce of flab to his prose, nor a hint of self-pity. He’s matter-of-fact and funny.

The Architect of Desire: Beauty and Danger in the Stanford White Family by Suzannah Lessard

I was far less interested in the tawdry aspects of the infidelity and murder of the Gilded Age architect Stanford White than in Lessard’s beautifully rendered portrait of her famous family (she is White’s great-granddaughter) and its legacy of troubled relationships. My favorite quote from the book draws an analogy between family history and architecture: “Like architecture, it is quiet. It encompasses, but does not necessarily demand attention. Like architecture, too, family history can suddenly loom into consciousness. One can go about one’s life with no thought of the past, and then, as if waking from a dream, be astonished to see that you are living within its enclosure.”

Mary Karr is a national treasure, and this book is, in my opinion, her very best. I thoroughly enjoyed watching her roll up her sleeves and practice her craft of great, tight, image-filled writing peppered with her trademark acerbic, right-on wit. The scenes in which she is too blotto even to care for her own child are so raw and frank they made me wince.

Kafka is my lifelong hero, and his diaries, which span the years 1910 to 1923 (he started keeping a diary at age twenty-seven), offer a fascinating insight into the life of a man who sees the world through scenes, scenes that can turn on a dime, from reality to pure invention. I know of no better primer for writers than these observations of daily life, mixed with ideas, fears, dreams, and story snippets.

Autobiography of a Face by Lucy Grealy

Speaking of writing that’s void of self-pity, Lucy Grealy’s memoir about her disfigured face is just that. At age nine, Grealy was diagnosed with a serious cancer. When she returned to school with a third of her jaw removed, her classmates taunted her cruelly. She spent the rest of her short life undergoing an endless string of surgeries just so her face could resemble something approaching normal. Her writing sings: “Unlike some stroke victims, who are physically unable to name the person in the mirror as themselves, my trick of the eye was the result of my lifelong refusal to learn how to name the person in the mirror. My face had been changing for so long that I had never had time to become acquainted with it.” And there’s this: “I spent five years of my life being treated for cancer, but since then I’ve spent fifteen years being treated for nothing other than looking different from everyone else. It was the pain from that, from feeling ugly, that I always viewed as the great tragedy of my life. The fact that I had cancer seemed minor in comparison.”

I love this book because of its raw honesty and Knapp’s no-holds-barred approach to her own story. I read very few memoirs while working on Mother Daughter Me. But I did read this one, partly to absorb her total honesty, and partly to learn about the mechanism of alcoholism— something I had never really understood—from someone who had experienced it.

I don’t love each and every one of Roth’s novels, but I do love each and every word of his memoir about his father’s decline and death. Not only is the writing just plain excellent, but the themes he touches on—watching a parent’s decline, role reversals, the symbolic importance of objects—were all themes I addressed in Mother Daughter Me. And in the middle of so much upset and chaos, Roth finds humor. Now, that’s the sign of a great memoir.

I Capture the Castle by Dodie Smith

I can’t resist tossing my most cherished novel into the mix. I love it partly for sentimental reasons. It was my sister’s favorite, and for as long as I can remember, she always had at least three copies scattered around her house. It’s a romance, it’s funny, its setting—yes, in a castle—is at once exotic and accessible, and it’s suspenseful. I first read it when I was a teenager and, as with any great book, there are certain lines that just never leave me. Here’s one of the most memorable, from Cassandra, the book’s heroine: “I have been hungry ever since; which is ridiculous as I had a good tea egg not six hours ago.” When I read that, I remember thinking, That must have been one big egg.
Learn More About Mother Daughter Me
print

DANCING IN THE LIGHT
Shirley Maclaine

Everything You Ever Wanted
Jillian Lauren

Comfort Me with Apples and Tender at the Bone: Two Culinary Treasures
Ruth Reichl

I Should Have Honor
Khalida Brohi

Nothing Is Impossible
Christopher Reeve

The Possibility of Everything
Hope Edelman

With or Without You
Domenica Ruta

After the Falls
Catherine Gildiner

The Mistress’s Daughter
A. M. Homes