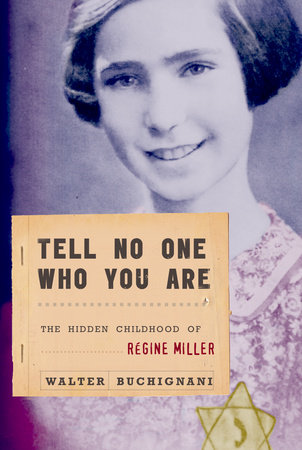 Tell No One Who You Are

The Hidden Childhood of Regine Miller

About Tell No One Who You Are

During the days of Nazi terror in Europe, many Jewish children were taken from their families and hidden. Régine Miller was one such child, who left her mother, father, and brother when she was 10 years old. Utterly alone as she is shunted from place to place, told to tell no one she is Jewish, she hears that her mother and brother have been taken by the SS, the German secret police. Only her desperate hope that her father will return sustains her. At war’s end she must learn to live with the terrible truth of “the final solution,” the Nazi’s extermination camps.

The people who sheltered Régine cover a wide spectrum of human types, ranging from callous to kind, fearful to defiant, exploitive to caring. This is a story of a brave girl and an equally brave woman to tell the story so many years later.

Tundra’s WALTER BUCHIGNANI was born in Montreal, Quebec. He graduated from Concordia with a B.A. in Journalism and Political Science. He has worked at the Montreal Gazette since 1987, first as a reporter, then feature writer, and now as a… More about Walter Buchignani

“Buchignani…[recreates] Régine’s experiences with aching clarity…he conveys both a human drama and a chilling moment in history.”
–Publishers Weekly

Looking for More Great Reads?
21 Books You’ve Been Meaning to Read
Download Hi Res
Tell No One Who You Are

Tell No One Who You Are