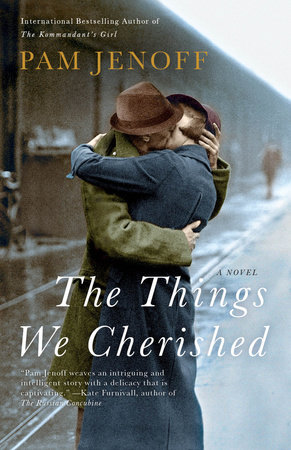 This guide is intended to enhance your reading group’s discussion of The Things We Cherished, a tale of love during one of the most complicated times in history from Pam Jenoff.

Charlotte Gold is shocked when her ex-fiancé Brian appears on the doorstep of her law office with a troubling case. Roger Dykmans, a wealthy financier and the brother of a Holocaust hero, has been accused of World War II-era war crimes, including the betrayal of his brother and the Jews he tried to save. All Charlotte needs to do is travel to Munich and help Brian’s estranged brother Jack prove Roger’s innocence.

Despite her misgivings, Charlotte agrees, but the case is soon hindered by the client himself. Roger refuses to help with his own defense, revealing only that proof of his innocence lies inside an intricate timepiece last seen in Nazi Germany. As Jack and Charlotte track the anniversary clock through the past century, they learn of Roger’s love for his brother’s Jewish wife, Magda, and the tragic decisions he had to make to save her—all the while fighting a growing attraction of their own.

1. Why do you think Charlotte agreed to help Brian and take on the case? Do you agree with her decision?

2. Do you think the ends that Roger was seeking (saving Magda and her daughter) justified the means of his choices and actions? Did you find him likeable despite these choices?

3. What do you think drew Roger and Magda together so powerfully? How did their dynamic change throughout the book?

4. What do you think Magda really wanted?

5. What role does the clock play throughout the book? Are there commonalities in the way it touches people’s lives? Differences?

6. The relationships between the brothers in the book (Brian and Jack, Sol and Jake, Roger and Hans) are fraught with both affection and acrimony. What is it about sibling relationships that makes them so complex? Is it different when the siblings are the same sex versus the opposite?

7. Charlotte initially dislikes Jack. When does she begin to feel differently about him? What conflicts develop between them, and are they things that can be overcome? Is the fact that they’re both attorneys an advantage or a detriment to their romantic relationship?

8. How do you think Charlotte’s personal and professional lives influenced one another at the beginning of the book? Did that change?

9. With whom in the book does Charlotte most closely identify/relate? Why?

10. Were you surprised at the way in which Johann, the farmer, went on to live his life after Rebecca died?  How so?

11. Which character in the book was most tested by circumstance? Which was most transformed?

12. Did you think the events in the characters’ lives were driven by fate? Chance?

13. What do you think of Sol’s perception that he was the lucky one because he got to remain in Berlin after Jake was forced to flee?

14. Where do you think Charlotte winds up one month after the end of the book? One year? Five years?

PAM JENOFF is the author of The Kommandant’s Girl, The Diplomat’s Wife, Almost Home, and Hidden Things. She attended George Washington Univer­sity, Cambridge University in England, where she received a master’s in history, and the University of Pennsylvania Law School. A former Special Assis­tant to the Secretary of the Army and State Department officer, she lives in Philadelphia, where she works as an attorney.

The Garden of Letters

The Women of Chateau Lafayette
Back to Top