Trapped Under the Sea Reader’s Guide 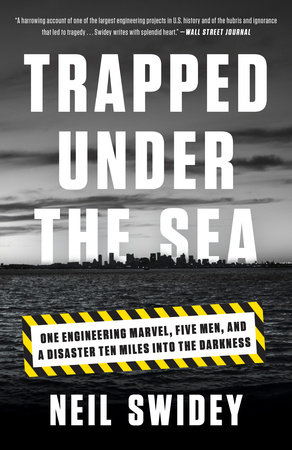 Trapped Under the Sea Reader’s Guide

The harrowing story of five men who were sent into a dark, airless, miles-long tunnel, hundreds of feet below the ocean, to do a nearly impossible job—with deadly results

A quarter-century ago, Boston had the dirtiest harbor in America. The city had been dumping sewage into it for generations, coating the seafloor with a layer of “black mayonnaise.” Fisheries collapsed, wildlife fled, and locals referred to floating tampon applicators as “beach whistles.”

In the 1990s, work began on a state-of-the-art treatment plant and a 10-mile-long tunnel—its endpoint stretching farther from civilization than the earth’s deepest ocean trench—to carry waste out of the harbor. With this impressive feat of engineering, Boston was poised to show the country how to rebound from environmental ruin. But when bad decisions and clashing corporations endangered the project, a team of commercial divers was sent on a perilous mission to rescue the stymied cleanup effort. Five divers went in; not all of them came out alive.

Drawing on hundreds of interviews and thousands of documents collected over five years of reporting, award-winning writer Neil Swidey takes us deep into the lives of the divers, engineers, politicians, lawyers, and investigators involved in the tragedy and its aftermath, creating a taut, action-packed narrative. The climax comes just after the hard-partying DJ Gillis and his friend Billy Juse trade assignments as they head into the tunnel, sentencing one of them to death.

An intimate portrait of the wreckage left in the wake of lives lost, the book—which Dennis Lehane calls “extraordinary” and compares with The Perfect Storm—is also a morality tale. What is the true cost of these large-scale construction projects, as designers and builders, emboldened by new technology and pressured to address a growing population’s rapacious needs, push the limits of the possible? This is a story about human risk—how it is calculated, discounted, and transferred—and the institutional failures that can lead to catastrophe.

Suspenseful yet humane, Trapped Under the Sea reminds us that behind every bridge, tower, and tunnel—behind the infrastructure that makes modern life possible—lies unsung bravery and extraordinary sacrifice.

1. Before reading Trapped Under the Sea, had you ever heard of the Boston Harbor clean-up?  Were you surprised by Swidey’s description of the harbor before the clean-up?

2. One of the book’s greatest strengths is how well we get to know not only the five divers who took on the toughest assignment of pulling the plugs, but also many of the other key players, from sewer agency boss Doug MacDonald to construction manager Dave Corkum to diving company owners Tap Taylor and Roger Rouleau. With whom did you identify?  Whose story surprised you the most?

3. Were you surprised by what you learned about the subculture of commercial divers and the difficulty of their work?

4. Although the beginning of the book is dominated by men, it’s actually two women – detective Mary McCauley and safety director Joan Parker – who play the largest roles after the accident in trying to figure out what went wrong.  Is it a coincidence? Or are women somehow better suited to these roles?

5. Given the strikingly different personalities of McCauley and Parker, were you surprised at how closely they bonded?  Were you inspired by their tenacity in trying to push for accountability and justice?

6. The “Hail Mary Pass” mission – at the end of the long, expensive Boston Harbor Cleanup Project – proposed to send five commercial divers to the end of a ten-mile tunnel without electricity, light, oxygen or transportation, hundreds of feet below the harbor, and with equipment that had barely been tested and wasn’t recommended for human use.  What do you make of the fact that so many seemingly smart people – at levels high and low – signed off on such a risky mission?

7. The Deer Island tunnel was both an engineering marvel and the centerpiece of a multi-billion-dollar massive project that ultimately transformed Boston for the better. Given all the dollars and brain power that went into the project over a decade, why do you think there was there so much pressure to complete the final step – pulling out the plugs – quickly and on the cheap?

8. Even before disaster struck, it was clear to all involved that this was a risky mission. If you were a commercial diver asked to take on this assignment, how do you think you would have reacted? What if it was your spouse or partner who was asked to sign on? Why do you think Hoss, Billy, Tim, Riggs and DJ agreed to the job?

9. Many people hold Harald Grob accountable for \what went wrong in the Deer Island tunnel.  Do you agree? Who else do you think shared responsibility for the disaster?

10. What lessons do you think can be learned from Trapped Under the Sea about worker safety, risk management, or organizational behavior for the other large-scale infrastructure projects that make the modern world around us possible?

11. This project attracted some of the best and brightest minds in engineering and construction from around the country. But this story shows that just because you bring top talent together to tackle a huge task doesn’t guarantee a good result.  What steps do you think could have been taken early on to better manage the project and avoid the crisis that ultimately forced the five divers to have to risk their lives?

12. Another major focus of the book is non-combat PTSD.  Like Hoss, did you initially think that PTSD applied only to veterans who had seen action on the battlefield? Have you ever known anybody who has suffered from it? Like DJ, were you surprised how paralyzing recurring nightmares could be for people who had suffered such searing trauma?

13. When something goes wrong with a large-scale undertaking, the natural impulse is to try to look for the single, giant mistake.  Swidey points out, however, that it’s usually a series of small mistakes that align to create disaster, “when the holes in the Swiss cheese line up.”  What do you see as the key, small mistakes and bad choices that led to this tragedy?

14. After reading the book, did you come away thinking that the Deer Island disaster could and should have been avoided? Or do you see it as the inevitable outcome of such an ambitious project?

15. Do you look at the infrastructure around us, and the largely anonymous workers who make it possible, any differently after reading this book?

Neil Swidey is the author of The Assist, a Boston Globe bestseller that was named one of the best books of the year by the Washington Post, and coauthor of the New York Times bestselling Last Lion: The Fall and Rise of Ted Kennedy. A staff writer for The Boston Globe Magazine, Swidey has been a finalist for the National Magazine Award and has twice won the Sigma Delta Chi award from the Society of Professional Journalists. He teaches at Tufts University and lives outside Boston with his wife and three daughters.
Learn More About Trapped Under the Sea
print

Sex on the Moon

The Buffalo Creek Disaster
Back to Top