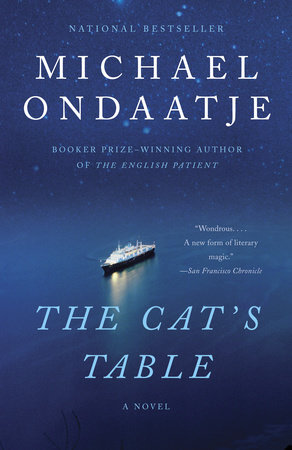 The questions, discussion topics, and reading list that follow are intended to enhance your reading group’s discussion of The Cat’s Table, the luminous new novel by Michael Ondaatje, Booker Prize–winning author of The English Patient.

From Michael Ondaatje: a stunning new novel—by turns poignant and electrifying—about the magical, often forbidden, discoveries of childhood and a lifelong journey that begins unexpectedly with a sea voyage.

“‘The journey was to be an innocent story within the small parameter of my youth,’ says the narrator of his voyage aboard the Oronsay, which carried him through the Indian Ocean to England and his divorced mother. But for the eleven-year-old, things shift from the moment he is seated at ‘the cat’s table,’ the least propitious spot in the dining room. He enjoys wild escapades with the two other boys at the table, quiet Ramadhin and hell-raiser Cassius, while befriending the mismatched adults at his table as well as his card-playing roommate, who tends the ship’s kennels. Others on board include his older cousin Emily, who takes up with the magnetic head of a performing troupe while protecting a deaf and frail-looking girl named Asuntha, and a heavily chained prisoner. The relationship among these four characters precipitates crisis, but we’re not led to it systematically; instead, Booker Prize–winner Ondaatje flashes forward to the narrator as an adult, showing us how unwittingly we lose our childhood innocence and how that loss comes to affect us much, much later. Writing in a less lyrically wrought style than usual, Ondaatje turns in a quietly enthralling work. Highly recommended.” —Library Journal

“This being a novel by the eminently accomplished Ondaatje, you may be certain that the tale will involve some tragedy, some heartache, and some miscommunication—and, yes, death. It is also beautifully detailed, without a false note: It is easy to imagine, in Ondaatje’s hands, being a passenger in the golden age of transoceanic voyaging, amid a sea of cocktail glasses and overflowing ashtrays, if in this case a setting more worthy of John le Carré than Noël Coward. Ondaatje writes with considerable tenderness of children who are all but abandoned, and at his best he lands squarely in Conrad territory, a place that smells of frankincense and in which ‘clotted clouds speckled the sky’ and sandstorms blow out to sea from distant deserts—just the sort of place, in other words, that a reader wants to inhabit. Elegiac, mature and nostalgic—a fine evocation of childhood, and of days irretrievably past.” —Kirkus Reviews

1. The epigraph is taken from the short story “Youth” by Joseph Conrad: “And this is how I see the East…. I see it always from a small boat—not a light, not a stir, not a sound. We conversed in low whispers, as if afraid to wake up the land…. It is all in that moment when I opened my young eyes on it. I came upon it from a tussle with the sea.” How does this set up the major themes of The Cat’s Table?

2. How is the voyage itself a metaphor for childhood?

3. Why do you think the opening passages of the book are told in third person?

4. We are 133 pages into the novel before Ondaatje gives us an idea of what year it is. How does he use time—or the sense of timelessness—to propel the story?

5. The anonymity of ocean travel and the sense that board ship we know only what others want us to know about them come into play at several points in the novel. What is Ondaatje saying about identity?

6. For several characters—the three boys and Emily among them—the journey represents a loss of innocence. For whom does it have the greatest impact?

7. Discuss the importance of some of the seemingly minor characters at the table: Mr. Mazappa, Mr. Fonseka, Mr. Nevil. What do they contribute to the story?

8. “What is interesting and important happens mostly in secret, in places where there is no power,” the narrator realizes (page 75). “Nothing much of lasting value ever happens at the head table, held together by a familiar rhetoric. Those who already have power continue to glide along the familiar rut they have made for themselves.” How does this prove true over the course of the novel?

9. How do the narrator’s experiences breaking and entering with the Baron change his way of looking at the world?

10. Discuss the three boys’ experience during the typhoon. How does it affect their friendship and their attitude toward authority figures?

11. How does the death of Sir Hector factor into the larger story?

12. On page 155, the narrator refers to Ramadhin as “the saint of our clandestine family.” What does he mean?

13. When describing the collapse of his marriage, the narrator says, “Massi said that sometimes, when things overwhelmed me, there was a trick or a habit I had: I turned myself into something that did not belong anywhere. I trusted nothing I was told, not even what I witnessed” (page 203). What made him behave this way? How did it affect his marriage?

14. On page 208, the narrator tells us about a master class given by the filmmaker Luc Dardenne in which “he spoke of how viewers of his films should not assume they understood everything about the characters. As members of an audience we should never feel ourselves wiser than they; we do not have more knowledge than the characters have about themselves.” Why did Ondaatje give us this warning, so far into the novel? What is he telling us?

15. What was your reaction to the revelations about Miss Lasqueti?

16. How do you think her letter to Emily might have changed the events on board the Oronsay? Why didn’t she send it?

17. Miss Laqueti signs off her letter,  “‘Despair young and never look back,’ an Irishman said. And this is what I did” (page 231). What does she mean?

18. Discuss Emily’s relationship with Asuntha. Did she, as the narrator suggests on page 251, see herself in the deaf girl?

19. When Emily says to the narrator, “I don’t think you can love me into safety,” (page 250), to what is she referring? What is the danger, decades after the voyage?

20. The narrator wishes to protect Emily, Cassius has Asuntha, and Ramadhin has Heather Cave. “What happened that the three of us had a desire to protect others seemingly less secure than ourselves?” he asks on page 262. How would you answer that question?

Michael Ondaatje is the author of four previous novels, a memoir, a nonfiction book on film, and several books of poetry. The English Patient won the Booker Prize and was an Academy Award–winning film; Anil’s Ghost won the Irish Times International Fiction Prize, the Giller Prize, and the Prix Médicis. Born in Sri Lanka, Ondaatje now lives in Toronto.

The Lonely Londoners by Sam Selvon; A Distant Shore by Caryl Phillips; Treasure Island by Robert Louis Stevenson; Youth: A Narrative by Joseph Conrad; The Jungle Book by Rudyard Kipling; The Upanishads; Malgudi Days by R. K. Narayan; The Buddha of Suburbia by Hanif Kureishi; Brick Lane by Monica Ali; The God of Small Things by Arundhati Roy; The Education of Miss Asia (drama) by Ernest MacIntyre.
Learn More About The Cat’s Table
print

The High Mountains of Portugal

The Tiger’s Wife
Back to Top