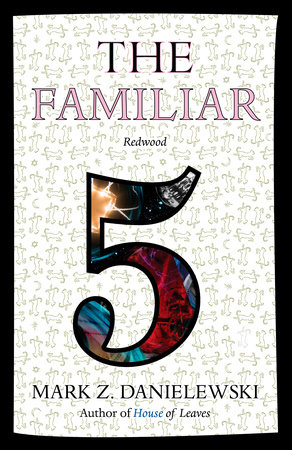 The questions, discussion topics, and reading list that follow are intended to enhance your reading group’s conversation of The Familiar, Volume 5: Redwood, Mark Z. Danielewski’s riveting new novel, which continues to trace the paths of nine diverse characters as Season One comes to a close and Season Two approaches in 2018. Feel free to wander in your discussions as you share different perspectives and explore the increasing entanglements and mysteries within this vast world.

The astonishing series about a young girl who befriends a cat hunting humanity continues with Volume 5, and the Season One finale, in which the consequences of how we encounter one another come into poignant and terrifying relief — especially on one September night, when an unexpected phone call demanding the return of the little white cat challenges everything the Ibrahims hold dear. They are not alone. Jingjing must contend with a rival he could never have anticipated, while Xanther must relinquish all she thought she knew as a far greater responsibility is set before her. Light wavers and pomegranates reveal their price as the effects of a great transition start to reverberate around everyone, Shnorhk’s efforts to resume playing music cannot escape history’s ghosts. Cas, in upstate New York, comes face-to-face with her lifelong nemesis in a candlelit rendezvous that presages the international crisis soon to come. As more lines tangle, Özgür and Luther brawl with a future that may have chosen them long ago, and Isandòrno crosses a line that will force him over the border into a country he has until now steadfastly refused. All the while, a terrible power roaming the world continues to grow . . .

1. The epigraph for this volume (p. 7) implicitly addresses its readers: “you” — or we — “don’t yet know . . . the stakes of this struggle.” What is it that we do not know? What is the struggle that is referenced? How does this quotation relate to serial narratives? (Readers of Danielewski’s House of Leaves may recall the epigraph from that novel: “This is not for you.” Is the “you” the same in each?)

2. What do you think would have happened if Tian Li and Jingjing hadn’t traveled to Los Angeles? Would the cat have lived? What about Xanther?

3. Who or what is the agent of violence in the “Caged Hunt” (p. 24)? Why does it conclude with the little girl in a pink dress and why is she “something familiar” (p. 34)? Why is this story presented as a video posted online but then also transcribed into text? Why does the reader see only what the camera sees?

4. The review of Hades (p. 57) does not comment on the opening of the doors after Xanther left the stage. Why do doors open everywhere around Xanther — from the cage doors in the kill shelter in Volume 2 to the Met’s emergency exits? Anwar notes the “pattern of opening” is “too abundant to ignore” — what then is its significance? And how does that pattern change by the end of Volume 5?

5. Compare the artifact for this volume — the Proto-Klamath Inscribed Thunderegg (p. 36) — with the others (Twin Rivers Ochre, Es Skhul Bead, Lenggong Valley Spear, and Hohlstein-Stadel-z Ivory). What is the archaeological history of each? What kind of planetary map emerges with all five in view? Is there an implicit timeline to their ordering? What is the connection to the time and place of the Stone Age story, which has spanned 237,726 years? What is the relevance of archaeology in The Familiar?

6. What is the source of the quotation at the beginning of the “White cat!” chapter (p. 50)? What is the technology in question and what is its connection to The Familiar?

7. The resident expert that Astair sees in the animal hospital (p. 73) turns out to be Dwight Plaguer, the USC student who failed Shnorhk in Volume 1 (the Narcon directs us to his initial appearance in TFv1, p. 228). Now it is not simply the stories of Jingjing and Xanther that are converging but the others as well. In what sense does The Familiar seem to be moving toward a climax in which all of the main characters are on the same page, so to speak?

8. Following that train of thought, trace the mentions of entanglement in Volume 5 and consider its significance as one of the keywords (or “ratings”) for Volume 5. What is the disciplinary context or knowledge base for the concept of entanglement: what does it mean both as a general and as a scientific term, and why is it a chorus or refrain in Jingjing’s chapter (p. 133)?

9. In the chapter “Mohonk Mountain House,” Bobby picks up a card that is identified as El Pescado, no. 50 (p. 103). Where is it from? Compile a list of all of the cards you have encountered over the five volumes: what kind of story seems to be emerging?

10. Take note of the descriptive statements about VEM that have appeared over the course of the first series, e.g. “VEM is the temple in the sands oblivious to sands” (p. 104). What can we make of the metaphors used to describe it? Is it clearly a force for either good or evil? Does it have concrete form and content?

12. How have the Narcons evolved over the course of the first season? What roles have they played? What type of information do they provide? What can we make of the dialogue among them (e.g. p. 205)? How have they evolved?

13. Cas and Recluse finally meet again in this volume. What do you make of their interaction? What do Recluse’s words and actions (pp. 462-473) say about his VEM Identity (TFv1, p. 642) and its possible effects on the world if he wins their war?

14. Consider the choice of flowers for each of the five volumes (yarrows are represented on pp. 140-41). Are there connections to be drawn between the various flowers and the content of the story?

15. In TFv5, Jingjing constantly insists that the cat is and was his (e.g. p. 411), even though the cat was always with Tian Li when they were together in Singapore. Why do you think Jingjing has this attitude? Did he seem to think this way in earlier volumes, and if not, what do you think has changed? Considering the vast distances dividing Singapore and Los Angeles, is there something more at hand here than just a cat? Even cultural? And if so, what does culture have to say for itself?

17. In this volume, Jingjing’s role as a translator is incredibly important, since he is meant to be imparting Tian Li’s wisdom to Xanther. How has he tried to mislead Xanther?

18. Jingjing’s actions provoke an event that echoes through the following chapters in entirely unprecedented ways: the structure of the novel itself is warped by this event (pp. 570-625). How do we understand this massive shock wave? How does it change our reading experience?

19. Now that we know Cynthia is Planski’s CI, does this provide more insight into her relationship with Teyo? How and why?

20. Why do you think the Clips are going black (p. 473)? Is it caused by the entanglement, or do you think VEM or some other outside force is to blame?

21. What do you think of Özgür’s behavior when he meets Shnorhk and his friends at Mnatsagan’s house (pp. 698-728)? Were you surprised by his reaction when he realizes the topic of Mnatsagan’s book (p. 724)? Why or why not?

22. Tian Li tells Xanther, “When you saved [the cat] in the rain, you saved us. When you named him, you armed him against us. He is no longer blind to the hunt. And he is very hungry” (p. 455). This implies that “the hunt” was already happening when the cat was still “blind” to it. Who or what else might be involved in the hunt, whether hunting or being hunted?

23. Try to account for all of the many (many!) permutations of “cat” that have appeared throughout the first series, such as Satya, Shnorhk’s maneki neko, Oz’s stone cat statue, Isandòrno’s carved jaguar and the readers’ cat photos. “Animality” is clearly a major theme of The Familiar, as the keyword for this volume suggests, but felines are predominant. In what way are cats literal symbols of themselves? What literal space do they occupy in the novel? What symbolic place? In sum, why cats? (For further reading, check out Danielewski’s Parable #8 and Parable #9 online.)

24. Xanther initially names the cat in Arabic which literally translates to “Blood Tree,” a species found in Socotra, Yemen. What might this tree say about the nature of the cat?

26. The big reveal for this volume is, of course, the cat’s name. What is its significance?

27. Since TFv5 is the finale for the first season of The Familiar, consider how the plot has progressed so far. What questions have been answered? What questions remain? Which character are you most concerned about?

Count Magnus and Other Ghost Stories

The Call of Cthulhu and Other Weird Stories
Back to Top