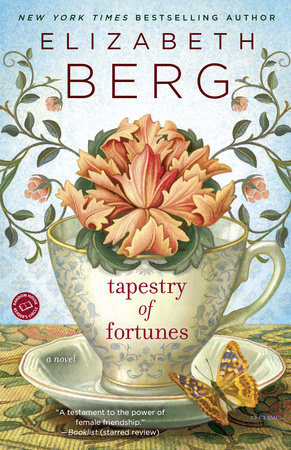 THE “HOLD ON A SECOND” PSYCHIC BY ELIZABETH  BERG

When I wrote Tapestry of Fortunes, I knew I wanted to include as­pects of divination. It was for whimsical as well as more serious reasons. I wouldn’t say I believe entirely in the prognostic statements of Runes or Tarot cards or people who call themselves psychics, but there can be times when readings are eerily dead on. One of the first times I went to a psychic, I had a lot of fun with a pretty eccentric character: But there was something about the experience that let me know there was more to the business of inquiring of the oracle than I had thought. Here’s what happened.

Claire Brightwater is the proprietor of Earth Dancer Gallery. This is a shop situated over a shoe store and next to a weight loss clinic. You can buy all kinds of Native American things there: kachina dolls, beautiful stones, feathers, books and tapes, blankets and jewelry and medicine wheels. Also, you can take advantage of Claire’s psychic abilities. You know she has them because of the sign in her window. PSYCHIC, it says.

So I make an appointment for a reading. And when I arrive, I’m a little late and apologetic and out of breath. “Sorry,” I say. “Sorry.”

She holds up her bracelet-laden arm. “No  problem.” She  pulls  a chair  up next to her  desk. “Here,” she says. “Sit down. Center yourself.” She  has long, flaming-red hair. She is wearing a purple shawl and a colorful, long skirt and many rings. She is a wonder to behold, one of those women who look so good overweight that you want  to be overweight, too. I put my jacket and purse  on the floor and she says, “No, you have to get centered,”  and puts my purse under me and my jacket  behind me.  ”There,” she  says. “Now,  I’ll just pay some bills here while you hold some crystals.” She puts a pink one in my right hand and a purple one in my left. While she makes out checks, I hold the  crystals  tight.  I see another homemade sign  against one of the counters. NO PLASTIC. CHECKS OKAY. BARTERING  OKAY. In a little while, she looks up. “Okay?” I nod. She checks the pink crystal. “This is for love,” she says. “Your heart is full of love.” She nods, agreeing with herself. “Yes. Very beautiful.” Then she takes the purple crystal. “This is for stress,” she says. “This  is cold. You got a lot of stress.” Now I nod, thinking, Well, I’m alive on the earth. Why wouldn’t I have stress? Claire’s advice to me about  stress  is  this: “You need to go back to the earth. You need to lie down on it, first on your back, arms  and legs spread out. Then lie on your front, and listen to the pulse  of the earth.” This sounds like fine advice to me. I used to do it all the time when I was a kid. And I had much less stress then, come to think of it.

She tells me she sees a lot of oscillating around me. “You’re going back and forth, back and forth inside, aren’t you?” We stare intently at each other. The  phone rings. “Excuse me,” she says. Then, into the phone, “Hello, Earth Dancer Gallery.”  I’m thinking, wait a minute. What  kind of reading is this?  But she takes  care of the call and is back to me. She tells me to pull an I Ching card, and I get “Retreat.” That  sounds  good, I tell her. Yes. I definitely need a vacation. Claire suddenly jerks her head up, stares into space. “No…note…NOTORIETY!” she says. She looks at me. “This word, it just came to me! Are you trying to be famous or something?”

The UPS man comes. Claire tells me to hold on, she’ll be right back. She goes over to the counter to pay the man, has a little chat with him. Sixty dollars I paid for this, I’m thinking. ]eez.

Next we do animal cards. Claire is an all-around kind of psychic. Turns out I’m an owl. “You need  to go into the dark for the light,” Claire  tells me. “That’s what this card is saying.” Well, I’m all for opposites. You know, the blond beauty, held in the arms of the strong, handsome man, says, “Oh, I hate you, I hate you, I hate you!” just before she kisses him to death. There’s something to opposites.

The phone rings again. Claire tells the caller, “He’s not here. Can I take a message?” She writes something down, hangs up. “It’s time for you to wear a feather in your hair, yes?” she asks me. She picks one out for me. Two dollars.

Now, I know how this is sounding. But the notion of wearing a feather is actually quite appealing. As is lying on the earth. As is a retreat. I’m starting to feel kind of happy. I ask Claire what music is playing in the background. It’s very, very soothing. I want it. It’s “Lazaris Remembers Lemuria,” she  tells me. Just so happens I can buy one from her.

“Have you been feeling tired?” Claire asks.

“Yes!” I say. And I really have. Not just I don’t want to do the dishes  tired. I’ve been deep tired.

She nods.  ’All the women around here are tired,” she says. “It’s because of our connection to the earth. The earth is having a very hard time giving birth to spring this year, and we all feel it.”

A customer comes in, a woman just looking. ”I’m doing a reading,” Claire says, “but just let me know if you need any help.” A few minutes later, there’s another phone call, someone wanting to know about the upcoming pipe ceremony. Claire tells them all about it.

“Your work, you need to pay attention to what comes from the heart.” She looks at me, shakes her head. “You will have great sucess.”

We finish up and I realize I am feeling calmer and  more centered than I have in a long time. Some of what Claire said felt silly. And some of it felt scary-true. Whatever has happened, I feel better than I ever have after any therapy session. Plus I got a feather and a tape and permission to lie down on the earth.

I guess what I believe is that there is much to the unconscious that we can learn from and be guided by. Is using some tool for fortune telling one of them? Maybe you should find out for yourself. If you’re not enlightened, you’ll at least be entertained. That’s my prediction.

1. Cecelia is a motivational speaker who preaches that “getting lost is the only way to find what you didn’t know you were looking for” (8). Do you think Cecelia is able to take her own advice? How does mov­ing in with Lise, Joni, and Renie help her explore this philosophy?

2. Throughout the novel, Cecelia  and  the other  women  often rely on her box of fortunes to help them search for answers to their big questions. How do these answers affect their decision-making? Do their fortunes make a difference, or is it something else that ultimately guides them to these answers?

3. “I,  the motivational speaker,  have not been able to motivate myself into making a new life without her,” Cecelia says, referring to Penny’s death (10). What eventually changes for Cecelia and enables her to start a new life? Does Penny play a part in this change, even after her death?

4. When Brice, Penny’s husband, tells Cece that he is getting re­married, she is initially surprised, but also happy that he is moving on. “People with people, good.  People alone, bad,”  Penny always used to say to Cece (35). Is it difficult for Cece to heed this advice? Why might it be easier for Brice?

5. Soon after Cece receives the postcard from Dennis, she decides to go visit him. What makes Cece so certain about seeing him again? Do you ever get over your first love? How might this relate to Lise’s situation?

6. When Cece moves into the house, Renie is initially defensive and skeptical. Her career as a columnist, too, highlights her skeptical and sarcastic  tendencies. Why do you think Renie shows only this side of herself for much of the novel? How are the other women eventually able to uncover the more sensitive side of Renie?

7. When Cece volunteers at  the Arms and meets Michael, she opens up to him about Penny’s death. She explains that it was “one of the most beautiful experiences” of her life (124).  What  does Cece mean about Penny’s death being beautiful? How does that beauty continue to influence Cece’s life?

8. Renie asks the women whether they believe  in the truth of the saying  ”Be kind, for everyone is carrying a heavy burden” (174). Wanda, the waitress  they meet during the road  trip, asserts that al­though not everyone carries a heavy burden, everyone does carry the burden of fear (175). How is this “burden of fear” a theme throughout the novel?

9. Mother-daughter relationships are central to the story: Renie struggles with meeting her estranged daughter; Lise’s daughter urges
her not to reunite with her ex-husband after their divorce; Cece grows annoyed with her mother for acting more like a girlfriend than a parent (110). What makes a mother-daughter relationship so special? What makes it so fraught, and sometimes difficult?

10. After Michael dies, Cece remembers a conversation that she and Penny once had: Cece asked, “What’s the point in loving  anything when it will just change or be  taken away?,” and Penny replied, “The point in loving is only that. And when you lose something, you have to remember that then there is room  for the next thing. And there is always a next thing.” (213) How does this idea relate to the broader theme of the novel? What is the “next thing” that Cece, Phoebe, and the other characters manage to find?

11. Toward the end of the novel, Cece mentions something that Dennis said about photography, which she  feels reverberates in her own life: “The greatest understanding of a thing is when you can’t reduce it any further.” (217) How does this statement relate to Cece’s views  on love and friendship? How might it relate to your own?

12. Lise, Joni, Renie, and Cecelia are all very different. What do you think makes their relationships with one another thrive, in spite of their differences? Consider how this relates to the quote at the end of the  novel: “We are a convergence of fates, a tapestry of fortunes in colors both somber and bright, each contributing equally to  the Whole.” (218-19)

The Queen of the Big Time
Adriana Trigiani
Back to Top