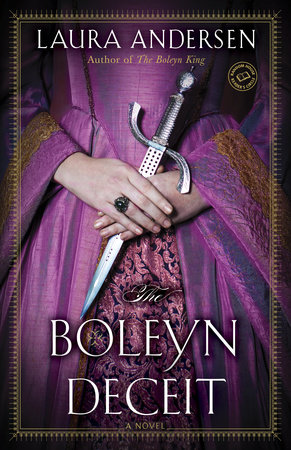 1. In the opening chapter of the novel, Minuette writes: “William has commanded [ John Dee] to give a private reading of our stars. Only the four of us— for it would not do to let our secrets, past or future, slip into wider circulation.” Yet, she keeps a journal that details many of their secrets. Do you think it is dangerous for her to do so? Would you, in her place?

2. When they meet with John Dee, Minuette reflects, “We all have motives that are less than pure.” Do you agree? Do you think that the nature of the court made it impossible to be anything but self-serving at heart?

3. At one point Dominic says to Minuette, “Give me the word, and I’ll go straight to William myself and tell him the truth.” To which Minuette responds, “We can’t just throw this in his face. He’s not ready to hear it.” Why do you think Minuette is so set against being honest with William? Is it solely because she wishes to spare his feelings? Was there ever a moment when Minuette or Dominic could have (or should have) told William about their relationship?

4. Ironically, though she is against confessing to William, it is Minuette who proposes the dipraesenti marriage, arguing that “the court live[s] by its own rules.” Do you think she is being rational, or hopelessly naïve? What’s your opinion on how they handled the situation, and how do you predict the news of their secret marriage will be met by William? By Elizabeth?

5. It is interesting that Dominic and Minuette never turn to Elizabeth for help or advice on their situation, especially given her ability to be incredibly rational and less volatile than her brother. Why do you think this is?

6. Elizabeth excuses herself for “keeping her own counsel,” because she realizes that William too has “confidences kept,” even from her. Each of the “holy quartet” has their reasons for keeping secrets, some trivial, some lifealtering— do you think these secrets will ultimately rip them apart? Or are secrets sometimes necessary in order to keep people together?

7. Robert Dudley is an interesting character because, despite how involved he is in court life, he also does his best to keep his head down and his nose clean, unlike his father. Do you think this is wise? What do you make of his relationship with Elizabeth? With William?

9. Do you think that a true, balanced friendship can ever really exist between two people who are on vastly different playing fields of power, as William and Dominic are? Why or why not?

11. Do you see any parallels between William and Elizabeth’s relationship and that of Anne and George Boleyn?

12. How do the feelings between Dominic, Minuette, William, and Elizabeth shift over the course of the book? Compare their standing at the end of The Boleyn Deceit to their relationship as it was in The Boleyn King. Of the quartet, who do you sympathize with most?

13. During a conversation about political strategy, Will’s uncle opposes him, to which William replies, “Do tell, Lord Rochford: if being king isn’t about me, then whom is it about?” Do you think this is the right attitude to have? Does your opinion of William change over the course of the book?

14. There have been many books written about the Tudors, not to mention the popularity of fi lms and television shows about this time. What do you think is so fascinating about this particular era, and this particular family (for you personally, and in more general cultural terms)?

The Countess and the King
Susan Holloway Scott

At the Edge of Summer
Jessica Brockmole
Back to Top