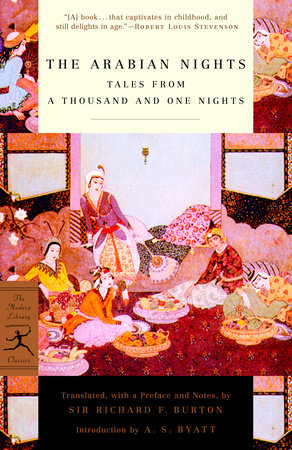 1. To the minds of a Western audience, The Arabian Nights is the most important work we have from medieval Arabic. Its influence can be seen throughout Western culture, from references in Jane Eyre to the plots of cartoons. What are some examples of the direct influence The Arabian Nights has had on Western literature or culture? Why did readers, then and now, enjoy it?

2. Burton has been quoted as having said, "The main difficulty, however, is to erase the popular impression that the ‘Nights’ is a book for babies, a ‘classic for children’; whereas its lofty morality, its fine character-painting, its artful development of the story, and its original snatches of rare poetry, fit it for the reading of men and women, and these, too, of no puerile or vulgar wit. In fact, its prime default is that it flies too high." How does one account for the fact that, historically, The Arabian Nights has been seen as a children’s book? Is it more appropriate for adults than for children given its content and depth? What are the main attributes that make it suitable for either audience?

3. The structure of The Arabian Nights is an entire study in itself. Debate has raged over the tales’ relation to one another and to the overall structure of the work. Is the narrative structure effective? Are the tales related to one another or are they simply a mixture of unrelated stories bound by a narrative created solely for that purpose? How important is the setting of The Arabian Nights to the interpretation of each individual tale?

4. One of the most important moral concepts in The Arabian Nights is that of fidelity. From the very beginning of the work, fidelity is the driving force that binds the brothers together and that provides the backdrop for the telling of the tales. Fidelity of all kinds is explored in The Arabian Nights: that between a husband and wife, between brothers, and between a lord and his servant. Describe different depictions of fidelity in specific tales and explain how they are central to the advancement of the plot and the characters. Why is such a high premium placed on fidelity throughout the book?

5. Morals and ethics are among the most important subjects dealt with throughout The Arabian Nights. Describe the moral system as it is depicted throughout the course of the book, giving examples of important moral concepts in specific tales. How do the morals serve to propel the plot of the tales? How can one reconcile the bawdiness of these tales with the serious moral and ethical messages conveyed? Does the overt sexuality and "inappropriate" content reduce in any way the impact or importance of these moral messages?

The Satyricon/Seneca, The Apocolocyntosis
Petronius and Seneca

The Marriage of Cadmus and Harmony
Roberto Calasso

Edgar Huntly or, Memoirs of a Sleep-Walker
Charles Brockden Brown

The Arabian Nights, Volume I
Anonymous

Tales from the Thousand and One Nights
Anonymous

The Taming of the Shrew
William Shakespeare

Grief Lessons
Euripides
Back to Top