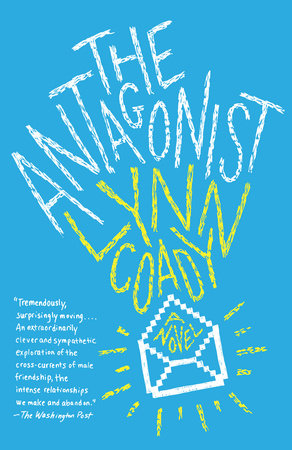 The introduction, discussion questions, and suggested further reading that follow are designed to enhance your group’s discussion of Lynn Coady’s The Antagonist, her compelling new book about a young man coming of age, surviving various tragedies, and arguing fiercely with a novel written about him.

An epistolary novel for the Internet era, The Antagonist is told through a series of e-mails, written over the course of a summer by Gordon Rankin Jr., but spanning most of his life from his teenage years to his early middle age. Rank’s messages are a fulsome and furious response to a recently published novel by an old college friend, Adam—a novel that appropriates Rank’s life and depicts him as little more than a brooding menace driven by an “innate criminality.” Rank now wants to set the record straight, with a vengeance. “You have taken something that was mine,” he tells Adam, “and made it yours, without even asking” [p. 10].

But to do so, Rank must relive the most painful experiences in his life: the brain injury he inflicted on the shiftless drug dealer Croft, the tragic death of his mother, his role as a hockey “enforcer,” his involvement in the accidental death of a bouncer, his conversion to and apostasy from Catholicism, the loss of his girlfriend Kirsten, and the ongoing friction with his irascible father, Gord.

Rank is big, and his size has always belied his age. Adults mistake the six-foot-four fifteen-year-old for a full-grown man. The ancient Greeks might have thought that character is fate, but for Rank it’s his physical appearance that determines the trajectory of his life and others’ perception of him. He looks like a brute; therefore, he must be one. Constable Hamm tells him: “I know you. . . . I see exactly where you’re headed, son” [p. 66].  And, indeed, Rank largely assumes the roles people expect him to play: he clears his father’s ice-cream shop of punks, delivers hard checks on hockey opponents, breaks up fights at the dive bar where he works to pay for college. But he performs these roles reluctantly, with complicated motivations and unintended consequences.

Adam has objectified Rank, turned him into a kind of automaton who simply acts out his thuggish nature. Rank’s response is not so much to refute the “facts” of his ex-friend’s novel but to fill them out from the inside, to make himself the subject rather than the object of his story, to present himself as a much more complex and thoughtful character who has suffered mightily because of the pain he’s caused others.

Brilliantly crafted, culturally astute, and at times roaringly funny or absolutely heartbreaking, The Antagonist is a tour-de-force of literary ventriloquism. Perhaps no contemporary female novelist has so fully inhabited the male mind (and body) as Lynn Coady has done here. Her novel raises many intriguing questions: about the nature of identity; the ethical issues of using other people’s lives in works of fiction; the extent to which men, like women, are bound by stereotypical expectations based on their looks; and what it means to truly own the story of your life.

1. There is a long tradition of epistolary novels, which are composed of letters or rely heavily on them: Samuel Richardson’s Clarissa, Mary Shelley’s Frankenstein, Saul Bellow’s Herzog, to cite just three examples. What is the effect of Rank telling his story through a series of e-mails? Are there any significant differences between a novel in letters and one in e-mails?

2. In what ways does Rank feel Adam has unfairly characterized him in his novel? Why does he find the throwaway lines–like the detail about the rash Rank gets from shaving the space between his eyebrows–so disturbing?

3. To what degree is it dubious or wrong for writers to draw upon their friends’ lives, without their consent, for their fiction? Is using another’s experience, particularly a painful one like the death of Rank’s mother, always an unethical appropriation?

4. On several occasions, Rank justifies his bad decisions–rushing out to help his father with Croft instead of calling the police, or accompanying Ivor on drug deals–by explaining that he was just a kid. At the same time, he clearly blames himself for Croft’s brain injury, his mother’s death, even Ivor’s. To what extent is he responsible for these misfortunes?

5. In what ways does Rank’s physical size determine his fate?

6. When Gord discovers his son is writing a book, he flies into a rage: “All you do is sit around tap-tapping all day long trying to come up with ways to blame your old man for every goddamn thing that’s ever gone wrong in your life” [p. 235]. Is there any truth to Gord’s accusation? Is Rank doing to Gord what Adam has done to Rank? How would Gord likely react if he were to read his son’s depiction of him?

7. Adam stops responding to Rank’s e-mails very early in the novel. Is it likely that he feels chastened by what Rank has written to him? What arguments might he make in self-defense? And why does he so quickly refuse to respond?

8. What is the effect of withholding the specifics of Sylvie’s death until very near the end of the novel? Why might Coady have made this choice?

9. What does The Antagonist suggest about perception and misperception, about resisting expectations based on appearance?

10. Rank writes a great deal about religion, about God and gods, his conversion and apostasy. Why does he find the Greek conception of a pantheon of meddlesome gods who delight in frustrating, punishing, and otherwise tormenting human beings more compelling than the Christian God?

11. Late in the novel, as Rank’s story approaches its dramatic conclusion, he asks Adam: “Do I really have to do this? Why am I even doing this?” [p. 249]. Why does Rank feel so driven to write to the man who has betrayed him? What does he hope to accomplish? Does he find some measure of peace in delivering his own version of the events of his life?

13. Why does Kirsten suggest that “you can get addicted to stories the way you can to booze or drugs” [p. 258]. In what ways can stories be addictive? And what sorts of comfort can they provide?

14. Much of the appeal of The Antagonist comes from Lynn Coady’s pitch-perfect characterization of Rank–his voice, as well as his mental and emotional life, feel utterly authentic–and of his friends Kyle, Wade, and Adam. What moments in the novel reveal the depth and subtlety of Coady’s understanding of how young men (and older) think and feel? What are some of the funniest scenes between the four college buddies?

15. At the end of the book, Rank writes: “Let me just stop right here and tell you I am sorry for it all–for offering it up to you, of all people, all that gore and grief. I am heartily sorry for having offended you. . . . Whatever it was I did to you that night, that morning (we both know it was something; I struck a match; I flicked a switch), I’m sorry” [p. 285].  Why does Rank apologize to Adam? Is he sincere? Has his view of how Adam treated him in his novel somehow changed?

Lynn Coady was nominated for the 1998 Governor General’s Award for Fiction for her first novel, Strange Heaven. She received the Canadian Authors Association/Air Canada Award for the best writer under thirty and the Dartmouth Book and Writing Award for fiction. Her second book, Play the Monster Blind, was a national best seller and a Best Book of 2000 for The Globe and Mail; Saints of Big Harbour, also a best seller, was a Globe and Mail Best Book in 2002. Her articles and reviews have appeared in several publications including Saturday Night, This Magazine, and Chatelaine. Born in Nova Scotia in 1970, Lynn Coady went to university in Ottawa and Vancouver, and now lives in Edmonton.
Learn More About The Antagonist
print

In Between Days
Andrew Porter

Me and My Baby View the Eclipse
Lee Smith

Keep Me Posted
Lisa Beazley
Back to Top