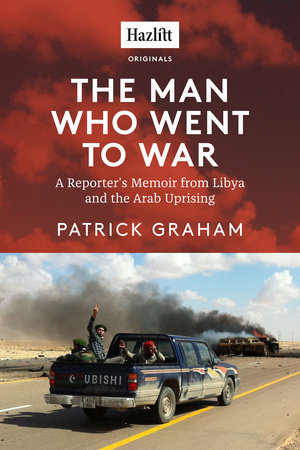 A Reporter's Memoir from Libya and the Arab Uprising

About The Man Who Went to War

Almost a decade since deciding to give up war reporting full-time, and at the unexpected prodding of his wife, award-winning journalist Patrick Graham travels to the heart of the Libyan Revolution and the Arab Spring. He delivers a story by turns harrowing and comic, rich in both dramatic, on-the-ground reportage and historical detail, of a nation on the brink of transformation.

“If you’re a recovering journalist listening to reports of a distant war on the radio, then you know, with the kind of arrogant certainty that sometimes irritates your wife, what you would be doing during these moments because you’re already there in your head. . . . I may have been at home in my kitchen wearing an apron, but my avatar had been doing some heroic work around the globe. Which is why I found myself mocking the guy on the radio: “For fuck’s sake, at least get to Benghazi!” It was around that time that my wife, who had walked in unnoticed, said, “Why don’t you go?”

Within a few days of his wife’s suggestion, Graham was on a plane. It had been a while since he had last reported on a war. Though he lacked the security or credentials of a formal assignment, and was more than a little out of practice, he improvised his way from Egypt, then experiencing its own Arab Spring upheavals, and across the frontier into Libya.

The result is an intimate eyewitness account – equal parts harrowing and hilarious – of the Libyan revolution as seen from the heart of the uprising in Benghazi. As ragtag militias try to beat back the assaults of Gaddafi’s troops, Graham introduces us to Libyan civilians with haunted pasts and uncertain futures, each of whom must decide whether they, too, will go to war. Meanwhile, Graham encounters both old colleagues and rookie journalists, forcing him to ask questions about the changing nature of war reportage in the age of social media.

With a fascinating detour that explores the rebellion’s intellectual and spiritual roots in the Sanusi, a Sufi Muslim political order, The Man Who Went to War is a penetrating and engrossing story of a country on the brink of transformation.

Patrick Graham is a freelance writer based in Toronto. He has been published in numerous British, American and Canadian publications and received the Kurt Schork Award from Columbia University and The Overseas Press Club of America Award for foreign magazine reporting…. More about Patrick Graham

Looking for More Great Reads?
21 Books You’ve Been Meaning to Read
Download Hi Res
The Man Who Went to War