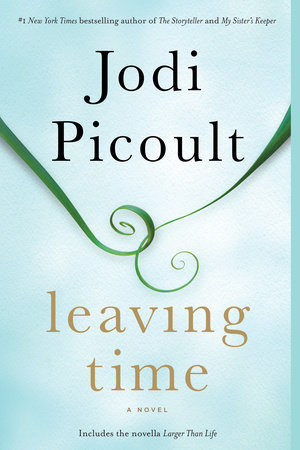 Random House Reader’s Circle: What was the original inspiration for this novel?

Jodi Picoult: I have three kids, and my daughter—-my youngest—-was getting ready to go to college, which meant I’d be an empty–nester. It was daunting, to say the least. Then I read a fact: In the wild, an elephant mother and daughter stay together until one of them dies. I thought, How enlightened! Why can’t we be like that? I began to do a little digging on elephants, and learned how advanced their cognition is. And when I discovered that they actually grieve and experience and process loss, I was completely hooked, and knew I would be writing about what it meant to be left behind . . . and also that I had my profession for the character of Alice.

RHRC: What kind of research about elephant behavior did you do to write the novel?

JP: For research, I was privileged to first spend time at The Elephant Sanctuary in Tennessee, meeting their elephants and learning what the caregivers do and how the sanctuary operates. I also went to Botswana and spent a week with a researcher, tracking herds in the wild, much like Alice does in the book. I learned to track elephants by footprint, to tell them apart, and to observe their behavior and mannerisms. I also gathered stories about evidence of elephant cognition and the unbreakable bond in elephant relationships. For example, the researcher I worked with found a male juvenile whose trunk was caught in a snare. He wouldn’t survive without the trunk, so a decision was made to have the Wildlife Management folks euthanize him. The researcher drove the Wildlife Management worker to the elephant in a vehicle, but the worker was inexperienced and shot the elephant in the forehead instead of behind the ear. This left the elephant in even more pain, trumpeting. At that moment, a huge matriarch charged down the hill at the vehicle. This young male had been ejected from the herd already—-he was in his teens—-but his mother heard his distress and came running all the same. She stood over him, like a mother stands over a small calf for protection, until he died. Another example occurred in Pilanesberg, South Africa, where a reserve existed for elephants that were orphaned after culls for population control. It was a social experiment—-they thought these teen elephants would bond into a herd, but that didn’t happen, because there was no matriarch. So a decision was made to bring two older females, Durga and Owalla, back to Africa from the United States where they had been working and training. It was a success—-the two matriarchs formed two thriving herds. However, Owalla got bitten by a hippo sixteen years later and couldn’t be anesthetized for medical reasons. They knew she was going to die, if not treated. So Randall Moore—-Owalla’s former trainer—-was called in. He found the herd, got out of his vehicle, and called Owalla by name. The younger members of the herd scattered, terrified of this human contact. Owalla came forward and greeted Randall, and then lifted her trunk and her leg according to his commands, letting the vets treat her without any anesthetic. After sixteen years of being completely wild, she remembered him, and his commands.

RHRC: Is there a favorite thing you learned about elephants during your research?

JP: Elephants are among the few species in this world (including humans) that show cross–species empathy—-they will help out another animal in distress even if there is no biological advantage. Their grieving rituals are remarkable, too—-an elephant will have a change in behavior if it comes across the bones of another elephant. They get quiet and reverential, and their tail and ears droop. Elephants will return to the site of a herd member’s death for years afterward, to stand quietly for a while before moving on. They have been known to break into research facilities and take bones of an elephant that are being used by a researcher, and to bring them back to the site of that elephant’s death. At The Elephant Sanctuary, I met Sissy, an elephant who survived the 1981 Gainesville flood by being submerged for twenty–four hours with only her trunk above water. When she got to the sanctuary, she was traumatized and took to carrying around a tire, like a child’s security blanket. Eventually she bonded with an elephant named Tina and they were fast friends. But Tina died, and when she did, Sissy stayed with her—-and remained by her grave for a few days. Finally, she placed her tire on the grave—-like a wreath—-and left it behind, never to return to it, almost as if she believed Tina needed the comfort more now.

RHRC: You’ve said in other interviews that the endings of your books still sometimes surprise you. Did you know how Leaving Time would end?

JP: Yes. It has a KILLER twist and I needed to know exactly what happened or I wouldn’t have been able to write the book the way I did. That’s all I can say without giving anything away!

RHRC: Leaving Time, like many of your novels, is told in shifting perspectives from multiple characters’ points of view. What’s it like to inhabit so many different voices during the writing process?

JP: I always think of the narrative as a stream, and there are a bunch of different Wellies lined up on the side of the bank. Writing in a certain character’s voice is a little like stepping into one of those pairs of boots. They feel different than other boots might as you step into the narrative stream, and catch it at a given moment, and it informs how you think and speak and move. Then you step out and try on another pair of boots. I really like letting the voices flow through me while I’m writing. In that sense I guess I’m a little like Serenity.

RHRC: Like Leaving Time, your novel Second Glance also contains a supernatural element. Do you believe in psychics and ghosts? Did your beliefs change at all as you were researching and writing these two books?

JP: One of the things I learned during the research of Second Glance was that ghost hunters appreciate skeptics—-they keep everyone else honest. To that end, you shouldn’t believe in the paranormal unless you have a valid experience. I did research with Chip Coffey, a U.S. psychic, for Leaving Time. He has a TV show called Psychic Kids, in which he helps parents deal with kids who have paranormal abilities as a child, as he did. A lot of Serenity’s voice comes from Chip, who is such a fantastic guy—-one of the first things he said to me was “I’m gay, I’m Catholic, and I am a psychic. . . . I hit the trifecta!” That funny irreverence was part of what I wanted to give Serenity. When I first met Chip, I gave him permission to tell me anything that “came across” during our time together. At that meeting, my grandparents were still both alive. Chip mentioned something about my grandmother that no one knows—-not even anyone in our family. It’s not something you can Google about me, for example. That was impressive. But I was MORE astounded when, six months later, I was writing and I called Chip out of the blue to ask him a question about Serenity. In that interim period, my grandfather had died at age 101. My grandmother had been having a tough time and was crying at night and saying my grandfather was sitting on the edge of her bed. Before I could even ask my question about Serenity, Chip interrupted, “Your grandfather wants your grandmother to know it’s not her time, and he’ll come and get her when it is.” Now, Chip couldn’t have known I was going to call that day. Might he have been stalking the New York State death records? I guess so, but it seems unlikely. I was pretty amazed by that insight!

RHRC: At the heart of this story is the bond between a mother and a daughter. As a mom, is this a more personal novel than some of your others?

JP: I like to think of it as a love letter to my youngest—-the one with whom I share a bond of writing, since we co–authored a YA novel called Between the Lines. The happy ending here, though, is that Sammy called me after she was at college for a few months to say she missed creative writing . . . and that she wanted to co–write the sequel to our YA book that summer. So not only did I get to spend an entire summer working with her—-I get to promote Off the Page with her this year, too!

1. Despite their different backgrounds, Jenna, Serenity, and Virgil form a sort of unconventional family together. What do you think brings them together? Have you ever had a similar experience of finding support from an unlikely source?

2. Alice says that 98 percent of science is quantifiable, leaving 2 percent “that can’t be measured or explained. And yet that does not mean it doesn’t exist.” (p. 392) Do you agree or disagree? Can you think of examples from the book or from your own experience of something that fits into that 2 percent?

3. Virgil grapples with helping Jenna when he suspects discovering the truth might be more painful to her than never knowing. Have you ever been in a situation where you knew a truth that it might hurt someone to hear? What did you do?

4. Serenity’s fake psychic readings are successful, she says, because people look for sense in the nonsensical. Do you agree or disagree? If a psychic reading brings someone comfort or helps them grieve, do you think it matters if the message is faked?

6. Alice describes some amazing examples of elephants appearing to exhibit grief and empathy, which are drawn from real–life research. Discuss some of the ways elephant grief is depicted. How is it the same as human mourning? How is it different?

7. One of the major themes of Leaving Time is loss and how to cope with it. Discuss some of the ways the characters in this novel deal with their losses. Do you identify with any of these coping mechanisms more than others? How do you approach loss?

8. Do you think Thomas’s erratic and upsetting behavior justifies Alice’s affair with Gideon? What would you have done in Alice’s place?

9. Jenna compares her search for her mother to Captain Ahab’s search for the whale in Moby-Dick, or Javert hunting Jean Valjean in Les Misérables, saying they are all three defined by their search. Do you agree with this assessment? Have you ever felt defined in this way by something you wanted?

11. Do you believe in ghosts? If you could communicate with anyone who has passed away, who would it be?

12. Discuss the significance of the title Leaving Time. What is the literal meaning that Jenna ascribes to the phrase as a baby? What are some other ways the title could be interpreted?

13. “Negative moments get remembered. Traumatic ones get forgotten.” (p. 12) What do you think this means? Do you agree or disagree? Have you ever experienced something and discovered later that someone else remembers it completely differently?