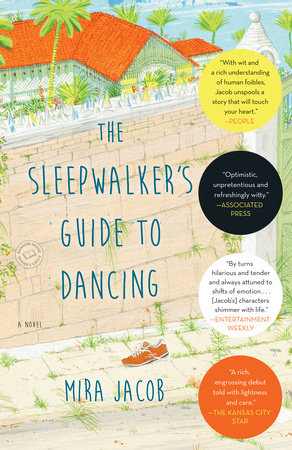 A Conversation Between Mira Jacob and Joanna Rackoff

Joanna Rackoff: This novel, I know, was a decade in the works. What was it like to work on a project of this scope? Did you ever despair of finishing it? Or was it more the opposite, that working on it sustained you?

Mira Jacob: Oh, those questions really get to everything all at once. Let me answer the easier question first. Yes, I did despair of finishing it at several points. I worked a series of corporate jobs while getting this book done, and most of the time I wrote from 11 p.m. to 1 a.m., when my young son (and the rest of the world) was asleep. I’m pretty up front about the fact that this book took me ten years to write, because I think there are a lot of people like me—-people with dreams bigger than their day jobs—-and I want them to know they are not crazy for keeping at it.
As for the scope and the scale—-the spooky truth is that when I started the novel, I thought I would be writing a purely fictional book about a father receding from the world. I imagined him -having -Alzheimer’s, or maybe just some kind of nonspecific dementia. I had a great father character in the original draft, and I was putting him through those paces when my real–life father was diagnosed with cancer. You know what isn’t the easiest thing in the world? Writing a father character into demise while your own father is growing weaker every day. So I put the book away for three years, and in those years I watched my father die slowly and painfully, and, well, it took a toll. Just how much of a toll it took became evident a year after he died, when I tried to go back to the book I had been writing, and instead of writing the father as a character, I kept writing my father—-his mannerisms, his way of moving through the world. At first I tried to resist it, but then I just gave in, and it was cathartic. I realized much later that it was my way of getting to say goodbye on my own terms.

JR: Most annoying question ever: You mention, in the acknowledgments, that you hope no one will mistake your mother and brother for Kamala and Akhil. Does the novel draw from your own cultural, geographical, or familial background? Is the world of the novel the world from which you come?

MJ: The world of the novel is absolutely where I come from: Syrian Christian South Indian living in the American Southwest, to be specific. Given that, and the fact that I put my actual father in the book, I felt like I needed that disclaimer in there, especially for my mother, who was a very cool force of culture and feminism and political thought in my life—-quite the opposite of Kamala. And my brother, while heavily into metal, never had the identity problems Akhil had.

JR: The story arc of the novel is somewhat unusual. What novels, or other works, influenced you in its development?

MJ: I like a novel with an emotional mystery at its center. To that extent, books like Kate Atkinson’s Behind the Scenes at the Museum and Junot Díaz’s The Brief Wondrous Life of Oscar Wao were great guides. But as far as the structure goes—-the unwinding of parallel story lines—-that was something I stumbled into when initial drafts weren’t going over well. In short, I was told to remove the entire high school section of the book because it came as one big, long chunk in the middle of the narrative and slowed down the pace. I talked to my husband, who is a filmmaker, and he told me about storyboarding, which is something I had never tried before. I sat down one day with a bunch of colored Post–its and the tandem story lines became beautifully clear.

JR: This is obviously a story about first–generation Americans, their struggles and conflicts. Do you see this as a universal story or a specifically Indian one?

MJ: It’s funny, because I know that reviewers have latched on to this as an immigrant story—-which it is, of course—-but in my mind, it’s mostly a people–dealing–with–loss story. That was at the heart of this for me: how to move forward in a world that keeps erasing itself behind you, how to find your footing in a slippery future when you haven’t made peace with your past. It’s also about relationships in families, those very specific dynamics that happen between people you can never get away from. And the reaction from readers has been surprisingly gratifying in this respect—-the number of nonimmigrants who have reached out to say, “You told the story of my family,” has been stunning.

JR: The novel, of course, is very much about sleep, and tries to get at the complex dynamic between our sleeping and waking lives. One character sleepwalks and, in doing so, finds the courage to do all he can’t in his waking life. Another, similarly, falls asleep when tensions rise. How did you become interested in sleep? How does sleep function in the novel?

MJ: Sleep is a human universal, something we all have to do to function no matter where we are located or what else is going on in our lives. In its best moments, it’s restorative, regenerative, and in its worst, it becomes a subconscious reckoning. All of the Eapens on either side of the globe spend their days contorting around their realities—-whether that’s being stuck in a life they can’t stand or a country that won’t see them—​so it made sense to me that at night, when their guards are down, sleep would wreak havoc on their lives.

JR: This is also very much a novel about the complex emotional web between parent and child. You became a parent while working on the novel. Did this affect your depictions of the parents and children in the novel?

MJ: Both my father’s death and my son’s subsequent birth had enormous ramifications on my perspective while writing the novel. It’s a little simplistic to say one devastated me and the other rebuilt me; the truth would be closer to saying that both of them were deeply untethering and also very bracing. They put me in my current bones. So, yes, it very much affected the novel, adding new layers of perspective, disappointment, fury, and forgiveness. You know, life.

1. The book starts in India, but doesn’t go back. Why do you think the author chose to open the book there?

2. Why do you think Amina was unhinged by taking the picture of Bobby McCloud? Do you believe her own explanation?

3. What do you think compelled Amina to photograph the worst moments at the wedding?

4. Sanji is presented as different from the rest of the adults in the -Albuquerque “family.” What might make her different, and why?

5. Kamala is a very polarizing character in the book. Were you drawn to or repelled by her? How do you think the author feels about her?

6. Kamala and Amina seem at odds most of the time, but what traits do they have in common?

7. Amina uses the camera to express herself. Kamala uses her cooking. Is there anything that you use (cooking, art, music, work) to connect to your world and the people in your life?

8. Akhil is angry with America in a way that Amina isn’t. What is the source of his anger?

9. If Akhil had lived longer, who else do you think he would have painted on his ceiling? Why?

10. Do you think Sunil was really sleepwalking when he set fire to the house? Why or why not?

11. All of the Eapens go through tremendous changes, though Amina’s are more subtle than most. What is the biggest change in Amina’s personality?

12. If Jamie and Amina hadn’t shared their pasts, do you think she would have been able to trust him?

13. When Thomas sees Akhil, he believes it’s a genuine visit, not a side effect of his tumor. When Amina sees Akhil, she thinks it’s a symptom of her depression. Which explanations are you more inclined to believe?

14. What invention do you imagine Thomas was last working on?

15. Why do you think the author titled her novel The Sleepwalker’s Guide to Dancing?

Learn More About The Sleepwalker’s Guide to Dancing
print

The Wednesday Sisters
Meg Waite Clayton
Back to Top