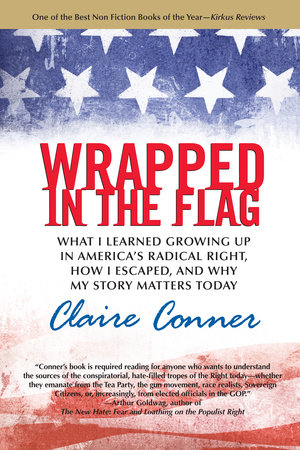 Wrapped in the Flag

What I Learned Growing Up in America's Radical Right, How I Escaped, and Why My Story Matters Today

About Wrapped in the Flag

A narrative history of the John Birch Society by a daughter of one of the infamous ultraconservative organization’s founding fathers.

Long before the rise of the Tea Party movement and the prominence of today’s religious Right, the John Birch Society, first established in 1958, championed many of the same radical causes touted by ultraconservatives today, including campaigns against abortion rights, gay rights, gun control, labor unions, environmental protections, immigrant rights, social and welfare programs, the United Nations, and even water fluoridation.

Worshipping its anti-Communist hero Joe McCarthy, the Birch Society is perhaps most notorious for its red-baiting and for accusing top politicians, including President Dwight Eisenhower, of being Communist sympathizers. It also labeled John F. Kennedy a traitor and actively worked to unseat him. The Birch Society boasted a number of notable members, including Fred Koch, father of Charles and David Koch, who are using their father’s billions to bankroll fundamentalist and right-wing movements today.

The daughter of one of the society’s first members and a national spokesman about the society, Claire Conner grew up surrounded by dedicated Birchers and was expected to abide by and espouse Birch ideals. When her parents forced her to join the society at age thirteen, she became its youngest member of the society. From an even younger age though, Conner was pressed into service for the cause her father and mother gave their lives to: the nurturing and growth of the JBS. She was expected to bring home her textbooks for close examination (her mother found traces of Communist influence even in the Catholic school curriculum), to write letters against “socialized medicine” after school, to attend her father’s fiery speeches against the United Nations, or babysit her siblings while her parents held meetings in the living room to recruit members to fight the war on Christmas or (potentially poisonous) water fluoridation. Conner was “on deck” to lend a hand when JBS notables visited, including founder Robert Welch, notorious Holocaust denier Revilo Oliver, and white supremacist Thomas Stockheimer. Even when she was old enough to quit in disgust over the actions of those men, Conner found herself sucked into campaigns against abortion rights and for ultraconservative presidential candidates like John Schmitz. It took momentous changes in her own life for Conner to finally free herself of the legacy of the John Birch Society in which she was raised.

In Wrapped in the Flag, Claire Conner offers an intimate account of the society —based on JBS records and documents, on her parents’ files and personal writing, on historical archives and contemporary accounts, and on firsthand knowledge—giving us an inside look at one of the most radical right-wing movements in US history and its lasting effects on our political discourse today. 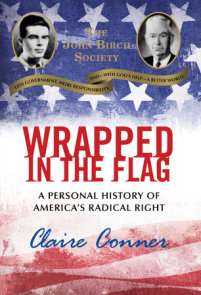 See all books by Claire Conner

“Both of Claire Conner’s parents were deeply involved in the cult of far right politics: they knew that Eisenhower was a secret Communist and they idolized Francisco Franco. Wrapped in the Flag is at once the heartbreaking and intermittently hilarious story of her coming of age and a first-hand history of the far right since the 1950s. Conner’s book is required reading for anyone who wants to understand the sources of the conspiratorial, hate-filled tropes of the right today—whether they emanate from the Tea Party, the gun movement, race realists, Sovereign Citizens, or, increasingly, from elected officials in the GOP.” —Arthur Goldwag, author of The New Hate: Fear and Loathing on the Populist Right

“An invaluable contribution to understanding the mentality of extremist conservatism and its supporters.”  —Kirkus, starred review

“The John Birch Society had a huge impact on American politics. They were responsible for the lurch into insanity. The religious right, the Tea Party and the takeover of the Republican Party by extremists can’t be understood unless you understand the paranoid xenophobia Birchers injected into America. This book is about a journey through and out of that Bircher netherworld. It’s a vital piece of the puzzle to understanding the madness that overcame America and a moving story about one person’s journey back to sanity.” —Frank Schaeffer, author of Crazy For God

“Experiencing this splendid volume is like reading a history book inside out: events you only knew about from afar are revealed anew, with the striking ground-level intimacy of a fine family memoir. I’ve been waiting for a book like this: one that demonstrates the shockingly effectual continuity of the John Birch Society as a force in American political life: from its early days discrediting the Cold War credentials of JFK, to its outsized role building up grassroots momentum in the Clinton impeachment, to its sudden eruption into mainstream Republican thinking with the rise of the Tea Party movement.” —Rick Perlstein, author of Nixonland

“This passionate, personal history of the John Birch Society is timely and important.  At a moment when Tea Party activists have embraced many of the Birchers’ most outrageous notions, Claire Conner has performed a great service by reminding us of the origins of some of most virulent ideas that continue to pollute our body politic.  As the skeptical daughter of two passionate Birchers, Conner may be the only person who could have written such a clear-eyed, insider’s account of the persistent dangers of right-wing extremism.” —Charles Kaiser, author of 1968 In America and The Gay Metropolis

“An affecting portrait of late-20th-century America on the fringe.” —Publishers Weekly

“This insider’s view of the most radical right-wing organization of the Cold War era describes the seeming paranoia and questionable logic of the most devoted JBS members. Conner provides colorful descriptions of many of the eccentric JBS leaders, including founder Robert Welch. . . . Readers interested in learning more about this example of the Cold War era’s ultraconservative political trends will be fascinated by Conner’s description of the perpetual fear of JBS members regarding communist takeovers and communist infiltration of the highest levels of our government. Recommended.” —Library Jounal

Wrapped in the Flag