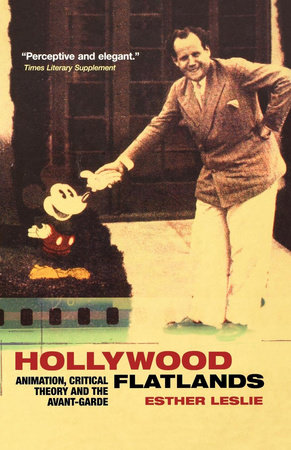 Animation, Critical Theory and the Avant-Garde

With ruminations on drawing, colour and caricature, on the political meaning of fairy-tales, talking animals and human beings as machines, Hollywood Flatlands brings to light the links between animation, avant-garde art and modernist criticism.

Focusing on the work of aesthetic and political revolutionaries of the inter-war period, Esther Leslie reveals how the animation of commodities can be studied as a journey into modernity in cinema. She looks afresh at the links between the Soviet Constructivists and the Bauhaus, for instance, and those between Walter Benjamin and cinematic abstraction. She also provides new interpretations of the writings of Siegfried Kracauer on animation, shows how Theodor Adorno’s and Max Horkheimer’s film viewing affected their intellectual development, and reconsiders Sergei Eisenstein’s famous handshake with Mickey Mouse at Disney’s Hyperion Studios in 1930.

“In an age when the Walt Disney Co … is completely lost to sober cultural debate, it is not insignificant to remember that, quite recently, the opposite was the case.”—Los Angeles Times

“This is about much more than the House of Mouse, tracing with a deft hand the aesthetic precursors of film animation in the work of Hans Richter, Walter Ruttman and Dziga Vertov.”—Radical Philosophy

“Brash and erudite, Hollywood Flatlands treats animated cartoons as an avant-garde taste and anti-illusionism as a Modernist problematic.”—London Review of Books

“Once in a long while, a book appears that meets all the high standards of scholarship. In the field of animation, Leslie’s Hollywood Flatlands is that work … groundbreaking.”—Choice, A Choice Outstanding Academic Title of 2003