The Quiet Side of Passion Reader’s Guide 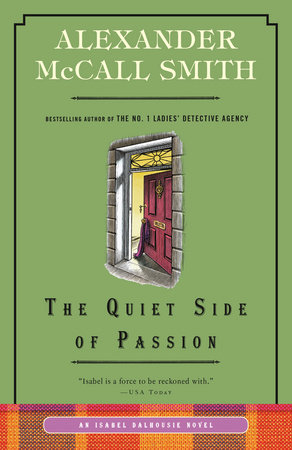 The Quiet Side of Passion Reader’s Guide

print
The Quiet Side of Passion Reader’s Guide

In the twelfth installment of Isabelle Dalhousie’s series, we find that gossip and assumptions can be very dangerous things, even to the most moral and ethical of us all.

As a full-time mother, wife, and editor, Isabel barely has any time for herself. When her husband, Jamie, suggest acquiring extra help, she reluctantly agrees and soon hires a new au pair and an intelligent assistant editor. Both women, though, have romantic entanglements that threaten to interfere with their work, and Isabel must decide how best to navigate this tricky domestic situation.
Meanwhile, Isabel makes the acquaintance of the single mother of one of Charlie’s friends, who is raising her son without the help of his father. WHen Isabel sees her in the company of an unscrupulous man, she must once again call on her kindness and keen intelligence to determine the right course of action at home, at work, and in the schoolyard.

1. Much is made of Isabelle’s morals and ethics, although no one is perfect. How does Isabelle occasionally stray from the straight, narrow road she tries to follow?

2. Describe Isabelle’s and Jamie’s relationship. What are their differences? What do you think makes their marriage work?

3. Isabelle has very definite views on her niece Cat’s personality. How would you describe Cat?

4. Describe the character of Eddie and his quirks. Why does he refer to Cat as “she”?

5. Gossip—from Jamie’s about Patricia, to Eddie’s about Cat’s new boyfriend—is a main theme of the book, but so are inaccurate assumptions. How do these two things differ? How are they related?

6. What do you think of Professor Lettuce’s letter to Isabelle (pp. 48-51)? How would you have responded?

7. Isabelle is aware that procrastination is among her greatest shortcomings. What are some weaknesses you recognize that you share with the characters in the book?

8. Jamie very reasonably suggests that Isabelle get some help for the magazine and the house cleaning, and declares she should only work at the deli once a week. Isabelle agrees and responds with alacrity. Within days she has an assistant and an au pair. How does Grace respond to these changes? Should she get to voice an opinion at all?

9. Describe the character of Leo. What do you think of him? Do you think is Leo good for Cat?

10. Isabelle’s introduction to Patricia doesn’t begin on a very high note, with Jamie telling her gossip about Basil Phelps (senior). Do you think Jamie’s gossip about Patricia affected Isabelle’s opinion of the woman before meeting her?

11. Isabelle finds Patricia a bit pushy and decides she must be lonely. But soon Patricia seems to be using Grace and Isabelle as free babysitters, rather than parents on a playdate. How do Isabelle and Grace react?

12. Isabelle has some suspicions about Patricia’s objectives. When Jamie and Isabelle see Patricia and a mystery man at the Quay, how does Isabelle react?

13. How do Isabelle’s actions upon leaving the restaurant get her in trouble? How does Patricia approach the situation when she sees Isabel again?

14. Antonia, the young and beautiful Italian au pair, is eager to please. How does her presence in the house create problems for Isabel?

15. Antonia disappears with Eddie to Skye for a few days. Eddie is caught up in her charms. How do Cat and Isabel react to the situation? Do you think they reacted handled it appropriately? What about Eddie?

16. Claire is smart and well-equipped to deal with the work for the Review of Applied Ethics, which Isabel desperately needs. What gets in the way of their working relationship?

17. Isabel approaches Basil Phelps (senior) after a concert, in a pub, about young Basil’s parentage. How would you describe this exchange? And his letter to her later? Do you think Isabel was right to approach him in the first place?

18. What does Leo do in response to Isabel telling him her problems?

19. Although everything that Isabel was concerned about was resolved, in what ways is she unhappy with how the outcomes were reached?

20. What does the title, The Quiet Side of Passion, refer to?

ALEXANDER McCALL SMITH is the author of the No. 1 Ladies’ Detective Agency novels and a number of other series and stand-alone books. His works have been translated into more than forty languages and have been best sellers throughout the world. He lives in Scotland.
Learn More About The Quiet Side of Passion
print