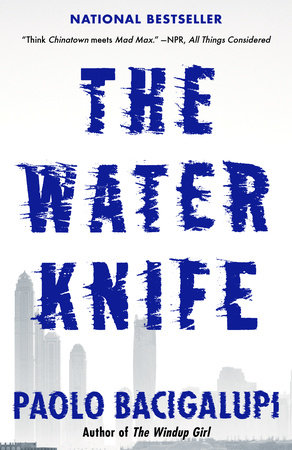 The introduction, author biography, discussion questions, and suggested reading that follow are designed to enhance your group’s discussion of The Water Knife, an arresting new novel by Paolo Bacigalupi.

Water is scarce in the American Southwest. With natural resources dwindling, Arizona, Nevada, and California are locked in a fierce battle for what little relief the shriveling Colorado River can provide. Catherine Case, the Queen of the Colorado—murderous and hard as steel—seems to be coming out on top with enough control to manage luxury arcology developments in Las Vegas while the rest of civilization descends into a scene of anarchic violence and poverty. When word gets out that there may be an untapped water source with rights up for grabs, she sends one of her best employees—the water knife, Angel Velasquez—to Phoenix to find out more. Working as both spy and assassin, Angel works his way through the self-destructing city to find what Case is after, but as unexpected enemies close in on him, he becomes entwined with two young women: Lucy Monroe, a prizewinning journalist who can’t seem to turn away from the chaos that surrounds her, and Maria Villarosa, a Texas refugee doing her best to survive even one more day. As they fight for life amid violent, near-apocalyptic conditions, they must each decide quickly what they want and where their allegiances lie.

In this fast-paced sci-fi thriller set in the not-too-distant future, Bacigalupi offers a supercharged and haunting tour de force that speaks to our most pressing contemporary issues, pushing us to consider how we engage with—and how we can and should protect—the world we inhabit and the resources that ensure our survival. Through the quest for power that unravels as the story of The Water Knife, the author also constructs a sharp dialogue about ethics, identity, allegiance, and what mankind will do when stretched to its outermost limits. As the story roars to its conclusion with passion and suspense, readers will find themselves thirsting for more.

1. Paolo Bacigalupi opens the novel with this sentence: “There were stories in sweat” (3). What does he mean by this? Why do you think he chose to begin with this declaration particularly?

2. Who is Catherine Case and why does Angel Velasquez work for her? How does Catherine meet Angel? How would you characterize their relationship? Does their relationship remain consistent throughout the story or does it change or evolve? What seems to cause these consistencies or fluctuations?

3. In chapter 2, readers are introduced to Lucy Monroe, a prize-winning journalist. Why does Lucy devote herself to reporting? What books has she written and how are the two books different from each other? What does this tell us about her character and how she has changed as a person throughout her career? Would you say that she is a good journalist? Why or why not? How is journalism presented as a whole throughout the novel? Is it seen as a noble profession? Does the novel ultimately seem to indicate what the primary role of a journalist should be?

4. Jamie thinks that people should have noticed what was happening around them long ago. He suggests that their downfall lies in the fact that they cared more about faith than data. What does you think he means by this? Do you feel that he is correct? Evaluate the treatment of faith throughout the novel. How does faith seem to help or otherwise hinder the characters in the novel? Likewise, what role does superstition play in the novel?

6. In chapter 7, Angel indicates that he “had always liked the desert for its lack of illusions” (80). What do you think he means by this? Evaluate the theme of truth in the novel. Are the characters able to see the truth of what is going on around them and the truth about themselves, or are they in denial? What allows them to see the truth, or otherwise prevents them from being able to see it?

7. Angel enjoys the television show Undaunted. Why does he seem to like this particular show? Does his view of the show change after he discusses it with Lucy? Why or why not? What might this suggest about the influence of arts and media, and the way that we approach these forms of entertainment? Would you say that the television show is propaganda? Why or why not? Are any other forms of propaganda evident in the story? How can something be recognized as propaganda?

8. In chapter 13, Angel thinks about his first meeting with Lucy: “He’d known her. And she’d known him, too” (141). realizes. Why does Angel think that he and Lucy know each other even though they had never met previously? What does he believe they share in common? Would you say that he is correct? Why or why not?

9. In chapter 16, Angel tells Lucy about a specific ritual of the tamarisk hunters. Why do you think that he chooses to share this story with Lucy? Why do the hunters share water when they meet each other at the Colorado? How does this ritual correspond to the relationship between the characters in The Water Knife? What do you think this reveals about the storyteller, Angel? Does the story seem to elicit the response that Angel was hoping for from Lucy?

10. In chapter 18, Michael Ratan compares Maria to Catherine Case. What does he say that they have in common? Do you feel that this is a fair comparison to make? Why or why not? Does it affect or alter your perception of Case’s character or any of the other characters?

11. In chapter 28, we learn that Angel blends in with the group of people he is among. What is it that allows him to blend in? What does he have in common with all of the others in the group? What major theme or themes does this seem to reveal or support?

12. Throughout the novel, several of the characters refer to the past, citing some variation of “It wasn’t always like this.” Does there seem to be any benefit to reflecting on the past or does looking back hinder the characters in some way?

13. Toomie says, “We’re all each other’s people” (250). What does he mean by this? Do the other characters seem to share this notion? Toomie also says that an Indian man once told him that he believed that the people of India could survive an apocalypse while Americans could not. Why does the Indian man believe this? Do you agree? Does the novel seem to confirm or refute that idea? Are there any examples of solidarity in the book? What does Angel seem to think about cooperation and survival?

14. What is the Stanford prison experiment? According to Angel, what determines how people act? Lucy asks if people are “anything on their own, inherently” (283) and if they can be better than what they grew up with. How does Angel answer this question? Do you agree with him? What does the novel ultimately seem to suggest?

15. In chapter 39, Angel dreams of the sicario. Who is the sicario and what relevance does he have in Angel’s life? Why does Angel have the thought that the sicario is his real father? What might he mean by this?

16. Angel tells Lucy “Under the right pressure, everyone breaks” (324). He believes that you shouldn’t judge people for “caving under pressure” but “for those few times when they were lucky enough to have any choice at all” (325). Do you agree with his statement? Why or why not? Are the characters in the story forgiving of one another?

17. Evaluate the theme of justice in the novel. What examples of justice are found in the novel? Why do the characters discuss the concept of poetic justice? At the story’s conclusion, would you say that justice seems to prevail? If not, what message does the book seem to offer about justice?

19. Does the novel seem to support the notion of binary good and evil, or does it offer a more nuanced version of morality? What ethical decisions are the characters faced with, and what informs and ultimately seems to determine their decisions? Does there seem to be a clear sense of what is right and what is wrong? What does the book seem to say about morality, choice, and human nature?

20. How does The Water Knife compare to Bacigalupi’s previous novels? What common themes are evident among the works? Are they treated similarly in each work? What do the characters have in common? Do any universal views or themes begin to emerge?

Paolo Bacigalupi is the best-selling author of The Windup Girl (2008), Ship Breaker (2010), The Drowned Cities (2012), and The Water Knife (2015). He has also published a collection of short fiction entitled Pump Six and Other Stories; The Alchemist, a collaborative novella project with science fiction author Tobias S. Buckell; and two young adult novels, Zombie Baseball Beatdown and The Doubt Factory. Bacigalupi also writes nonfiction. His work has been featured in Salon,WIRED, The Magazine of Fantasy and Science Fiction, High Country News, OnEarth, Asimov’s Science Fiction, and many other venues.  He has received several domestic and international honors for his work including the Hugo Award, the Nebula Award, the Michael L. Printz Award, the Theodore Sturgeon Memorial Award, the Locus Award, the Seiun Award, and the Ignotus Award. His works have appeared on “Best Books” lists curated by Time and Publishers Weekly, and his short fiction has been anthologized in several “Year’s Best” collections of science fiction and fantasy. He was also a finalist for the National Book Award.