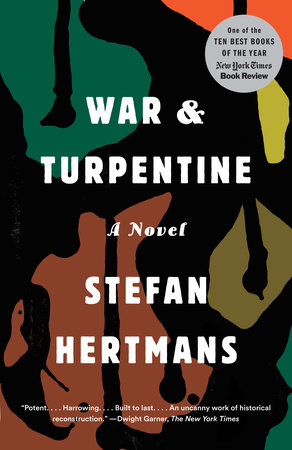 The questions, discussion topics, and reading list that follow are intended to enhance your reading group’s discussion of War and Turpentine by Stefan Hertmans. In this novel, a Flemish man reconstructs his grandfather’s story—his hopes, loves, and art, all disrupted by the First World War—from the notebooks he filled with pieces of his life. The grandson straddles past and present as he searches for a way to understand his grandfather’s part as both the artist he hoped to be and the soldier he was forced to become.

An international best seller: a vivid, masterly novel about a Flemish man who reconstructs his grandfather’s story—his hopes, loves, and art, all disrupted by the First World War—from the unflinching notebooks he filled with pieces of his life.

The life of Urbain Martien—artist, soldier, survivor of World War I—lies contained in two notebooks he left behind when he died in 1981. His grandson, a writer, retells his story, the notebooks giving him the impetus to imagine his way into the locked chambers of Urbain’s memory. He vividly recounts a whole life: Urbain as the child of a lowly church painter, retouching his father’s work; dodging death in a foundry; fighting in the war that altered the course of history; marrying the sister of the woman he truly loved; haunted by an ever-present reminder of the artist he had hoped to be and the soldier he was forced to become. Wrestling with this story, Urbain’s grandson straddles past and present, searching for a way to understand his own part in both. As artfully rendered as a Renaissance fresco, War and Turpentinepaints an extraordinary portrait of one man’s life and reveals how that life echoed down through the generations.

(With black-and-white illustrations throughout.)

1. In The Great War and Modern Memory, literary scholar and critic Paul Fussell discusses how the collective experience and horrors of the First World War gave way to a disillusioned modern sensibility. The Romantic period was over. How does this connect to War and Turpentine? Discuss this in connection with the passage about the Belgian soldiers being raised “with exalted nineteenth-century values, with pride and honor and naive idealism. Their military ethics were based on the virtues of courage, self-discipline, honor, the love of the daily march, respect for nature and their fellow men, honesty, and the willingness to fight man to man. . . . The atrocities and massacres changed the morals, the worldview, the mentality, and the manners of that generation forever” (pp. 226–27).

2. How does War and Turpentine compare and contrast to other war novels that you’ve read? How is this book particularly about the First World War and the time directly before and after, and how are the themes and stories universal?

3. Discuss how the story of Urbain unfolds. The novel is not told in typical chronological order and it shifts between various first-person and third-person narratives. How does the way the story is told affect your reading of it? Why has Hertmans written it in this way?

4. Why this title? Play around with some other possible titles. What would you have named this novel?

5. What is the effect of the various photos and paintings interspersed among the text of the novel? Do they add to your reading and understanding of the novel?

6. Discuss the repeated imagery of frescos—“A fresco is a painting executed on freshly plastered walls. The colors are applied to the wet plaster and combine with it as it dries. The art lies in anticipating how the colors will look after they dry” (p. 94)—the painting of which was Urbain’s father’s job in the novel. Why does Urbain’s father paint his own and Urbain’s faces in one of the church frescos? What is the importance for Urbain when he sees it? And how does it connect to the painting Urbain’s grandson finds at the end of the novel?

7. What is the importance of art for Urbain, for his grandson, and for this novel in general?

8. Why does the narrator, Urbain’s grandson, say that at first he “didn’t even dare to open the first page [of his grandfather’s notebooks], in the knowledge that this story would be a farewell to a piece of my childhood” (pp. 10–11)? Do you remember when you first realized that your parents or grandparents were more than simply your parents or grandparents, that they had/have a rich life filled with love, disappointments, fears, joys, et cetera?

9. Discuss the following line from the novel, “Without money or a degree, there are only two paths out of slavery: soldier or priest” (p. 116). Which would you have chosen and why?

10. On seeing a naked girl for the first time, Urbain “cannot believe [it] is real, a figure that opens the door to a whole new world inside him, a door he had taken great pains to keep shut, out of Christian piety and the repression it entails” (p. 125). When his grandson goes to visit the spot he thinks, “Never before have I been so deeply struck by the transience of human life” (p. 131). Why is this such a pivotal moment in the novel?

11. What is the importance of Catholicism and religion in general in the novel? How was it tied to almost all facets of the grandfather’s prewar life?

12. During the war, Urbain’s troops arrive in the countryside and he writes, “It reminded me of the seventeenth-century Dutch landscape painters, of their peaceful pictures, of treetops painted by the English artist Constable, dappled with patches of light and shadow, of the tranquil existence he had captured on canvas” (p. 154). How is nature imitating art imitating nature?

13. There are no paintings, photos, or images interwoven into the war sections. Why?

14. Discuss some of the war descriptions, such as the passages “lads with degrees who should be establishing households and having children—and here they lie, their scabrous bodies reeking in the tepid rain, with no hope of any change” (p. 198). and “To think that this remote, eerily silent place could become the setting for such horrors—it shows once again how any logic of war is utterly opposed to every natural fact, to ordinary time, to the usual course of things, which has no ultimate aim and retains very little of what human beings do” (p. 275). What do you think the book ultimately says about war?

15. Why is there not more about the grandmother, Urbain’s wife? What were the differences between Urbain and his wife? Do you believe the narrator’s depictions of Gabrielle? Is she a real, three-dimensional character or has she become a foil to the romanticized Maria Emelia?

16. Marrying his beloved’s sister, “should he have avoided the situation at all costs” (p. 236)? “How did he make the shift from his early infatuation with the flamboyant Maria Emelia to his deep personal bond with the restrained Gabrielle” (p. 236)? How would you answer these questions the narrator asks himself about his grandfather?

17. What is the import of the grandson finding Urbain’s painting of Velázquez’s Venus with Maria Emelia’s face? “What appeared to be a mere imitation concealed the original of his passion, and the charade of painting thus became the allegory of the hidden love he could never forget” (p. 270). When do you think he painted it and why has he kept the painting hidden all of these years?

18. What do you think the author is saying about love and life by the end of the novel?

STEFAN HERTMANS is an internationally acclaimed Flemish author. For more than twenty years he was a professor at the Royal Academy of Fine Arts, Ghent, where he wrote novels, poems, essays, and plays. War and Turpentine was awarded the prestigious AKO Literature Prize in 2014.

Translated from the Dutch by David McKay.

Birdsong by Sebastian Faulks
The Great War and Modern Memory by Paul Fussell
A Farewell to Arms by Ernest Hemingway
Anil’s Ghost by Michael Ondaatje
All Quiet on the Western Front by Erich Maria Remarque
Austerlitz by W. S. Sebald
Learn More About War and Turpentine
print

The Book of Aron
Jim Shepard

The Spy
Paulo Coelho
Back to Top