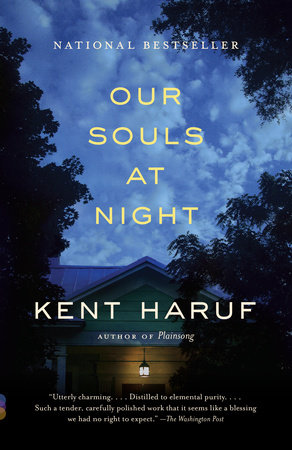 The questions, discussion topics, and reading list that follow are intended to enhance your reading group’s discussion of Our Souls at Night, the final novel from acclaimed author Kent Haruf.

2. The novel begins with the word “and”: “And then there was the day when Addie Moore made a call on Louis Waters.” What do you imagine came before it?

3. Kent Haruf was known for using simple, spare language to create stories of great depth. How does the modest action in Our Souls at Night open onto larger insights about getting older?

4. It takes a considerable amount of courage for a woman of Addie’s generation to invite a man she hardly knows to sleep in her bed. What do you think propelled her to do it?

5. When Louis comes over for the first time, he knocks on her back door in the name of discretion. Addie says, “I made up my mind I’m not going to pay attention to what people think. I’ve done that too long—all my life. I’m not going to live that way anymore. The alley makes it seem we’re doing something wrong or something disgraceful, to be ashamed of” (8). How does her attitude influence Louis’s?

6. Both Louis and Addie have to contend with gossip about their relationship. Who handles it better?

7. What does Addie’s friendship with Ruth show us about Addie’s character?

8. Addie and Louis both had troubled marriages, but stayed married until their partners died. How does that sense of propriety, of loyalty, influence their relationship with each other?

9. In describing his affair, Louis says, “I think I regret hurting Tamara more than I do hurting my wife. I failed my spirit or something” (42). What does he mean by this?

10. Why did Addie refuse to move after Connie’s death? How did this decision color Gene’s reaction to his mother’s late-in-life love affair?

11. On page 52, Louis describes his relationship with Addie to his daughter, “It’s some kind of decision to be free. Even at our ages.” Why does he feel freer with Addie than he does alone? How does his behavior become more uninhibited as the novel progresses?

12. How does Jamie’s arrival deepen the connection between Addie and Louis?

13. When Louis confesses that he wanted to be a poet, what effect does it have on Addie’s opinion of him? And on your opinion?

14. Addie and Louis both have regrets about the way they raised their children. How does that influence their relationship with Jamie?

15. Why did Addie buy new clothes for her trips to Denver that she never wears in Holt? What signal does it send to the reader?

16. On page 145, Addie mentions the Denver Center for the Performing Arts production of Benediction, based on the author’s own novel. Addie and Louis discuss the fact that it’s set in Holt, the fictional town in which they live. Why do you think Haruf slipped this into the story?

17. At the end of that conversation, Addie says, “Who would have thought at this time in our lives that we’d still have something like this. That it turns out we’re not finished with changes and excitements. And not all dried up in body and spirit” (147). What point is Haruf making?

18. Jamie’s arrival ultimately leads to grave consequences. What is Gene afraid of?

19. Several times during the novel, Addie is described as being brave, but she gives in to Gene’s demands. Is this a brave act? What is she protecting?

20. How would you describe the ending—as heartbreaking, hopeful, or something else?

21. In his final interview, conducted a few days before his death from interstitial lung disease, Haruf discussed Our Souls at Night: “The idea for the book has been floating around in my mind for quite a while. Now that I know I have, you know—a limited time—it was important to me to try to make good use of that time. So I went out there every day. Typically, I have always had a story pretty well plotted out before I start writing. This time I knew generally where the story was going, but I didn’t know very many of the details. So as it happened, I went out every day trusting myself to be able to add to the story each day. So I essentially wrote a new short chapter of the book every day. I’ve never had that experience before. I don’t want to get too fancy about it, but it was like something else was working to help me get this done. Call it a muse or spiritual guidance, I don’t know. All I know is that the trust I had in being able to write every day was helpful.” How does reading this affect your understanding of the book?

Rachel Joyce, The Unlikely Pilgrimage of Harold Fry
Marilynne Robinson, Gilead
Will Schwalbe, The End of Your Life Book Club
Wallace Stegner, Crossing to Safety
Anne Tyler, Back When We Were Grownup
Learn More About Our Souls at Night
print

My Name Is Lucy Barton

A Little Life
Back to Top