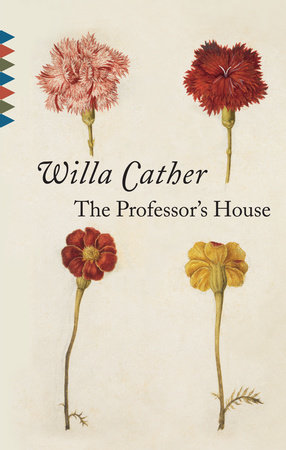 The questions, discussion topics, and author biography that follow are designed to enhance your group’s reading of Willa Cather’s My Antonia and The Professor’s House. We hope that they will provide you with new ways of looking at–and talking
about–two novels that represent Cather’s astonishing powers of narrative selection and juxtaposition; her ability to create believably complex characters who take on mythic dimensions in the reader’s imagination, and the historical vision that could celebrate the American past without minimizing its hardships and moral ambiguities.

The Professor’s House was published in 1925, only seven years after My Antonia, but it is set in an America that is at least a half-century removed from its frontier past, an America that sells off its heritage while buying up the relics of European antiquity. Its protagonist, Godfrey St. Peter, might be an older version of Jim Burden. He is a man who grew up on the prairie, entered academia and in his fifties has attained professional success and what at first seems to be domestic happiness. But over the year in which the novel’s events transpire–the year that follows his family’s move to a new house and ends with his near-death in the old one he has refused to abandon–it becomes clear that St. Peter’s success is hollow, his relations with his wife and children passionless and embittered. What meaning remains in the professor’s life lies in the past, in his relationship with a gifted pupil who died young and whose discoveries have made St. Peter’s family wealthy–but at an awful cost. "If Outland were here tonight," St. Peter thinks, "he might say with Mark Antony, My fortunes have corrupted honest men." [131]

If the tone of My Antonia is that of the romantic pastoral, The Professor’s House is a bleaker–and at times even a savage–book. In place of Jim Burden’s rhapsodic concluding vision, we are left with St. Peter’s realization that "He had never learned to live without delight. And he would have to learn to, just as, in a Prohibition country, he supposed he would have to learn to live without sherry. Theoretically he knew that life is possible, may be even pleasant, without joy, without passionate griefs. But it had never occurred to him that he might have to live like that." [257]

1. For discussion: The Professor’s House

This novel is named, not after its protagonist, but after his house. It is a house in which no one lives, that has been "dismantled" [3], and that, even when inhabited, was "almost as ugly as it is possible for a house to be." Why, then, is it so important to Professor St. Peter–and, indeed, appear to become more so in the course of the novel? How does Cather establish the house’s character and use it to indicate the character of her protagonist? Compare her description of St. Peter’s old house to her treatment of the family’s new residence and other houses, like Louie Marsellus’s "Outland" and the abandoned cliff-dwellings on the Blue Mesa.

2. Although St. Peter has pursued a life of the mind, Cather describes him in highly sensual terms: "for looks, the fewer clothes he had on, the better." [4] He luxuriates in the ornamental shrubs and flowers of his French garden, and in swimming. His keenest memories–of his youthful voyage along the coast of Spain and the dahlias he bought as a student in Paris–vibrate with sensuous detail. Why does such a sensual–and in some ways even hedonistic–man seem to disapprove of his family’s pursuit of worldly pleasures and possessions? In what ways does St. Peter’s hedonism–if such it is–differ from theirs?

3. Although the St. Peters initially seem happy, the reader gradually realizes that the family is torn by jealousy and resentment, and that its patriarch has effectively withdrawn from its affairs. At what points do these characters become aware of their emotional disconnection? Why are they unable–or unwilling–to overcome it?

4. One reason for the divisions in the St. Peter family is Tom Outland, who was Godfrey’s pupil, his daughter’s fiancé, and, ultimately, her benefactor. In what ways has Outland fragmented the family, both while alive and after his death, and why did the family let him do so? Why do nearly all the members of the household stake some kind of claim on him, as evidenced by Kathleen’s remark to her father: "Our Tom is much nicer than theirs"? [113]

5. Why does St. Peter remain so strongly attached to Tom Outland almost a decade after the young man’s death? Cather equates the boy with the Professor’s discarded younger self: "He was a primitive. He was only interested in earth and woods and water. Wherever sun sunned and rain rained and snow snowed…places were alike to him. He was not nearly so cultivated as Tom’s old cliff-dwellers must have been–and yet he was terribly wise." [241] What other reasons might there be for the Professor’s devotion? To what kind of wisdom is Cather referring in the preceding passage? How did St. Peter lose it as he grew older and what did he acquire in its place? In what ways does Tom Outland’s story recapitulate the older man’s?

6. Alongside the spartan Outland, who refused to contaminate his friendships with any element of self-interest, Cather gives the professor a son-in-law, Louie Marsellus, who is unabashedly materialistic. In marrying Tom’s one-time fiancée, Louie has also become the main beneficiary of his discoveries. But wealth alone may be insufficient: Louie seems intent on replacing Tom in the professor’s affections, just as he jokes about having Tom’s talismanic blanket made into a dressing-gown. Does Cather want the reader to dislike Louie, as his brother-in-law Scott McGregor does? In what way does Louie conform to period stereotypes of the social-climbing, luxury-loving nouveau riche? Why does the professor feel affection for him, even though Louie’s values seem diametrically opposed to his?

7. Is St. Peter subconsciously attempting suicide when he falls asleep without turning off the gas stove in his old study? What significance do you find in the fact that he is saved by a woman? How clearly does Cather allow us to know the motives of any of her characters?

8. The Professor’s House is a novel of oppositions–youth vs. age, instinct vs. contemplation, solitude vs. domesticity. Yet we should be careful not to read those oppositions too simplistically. Although St. Peter mourns the way he has sacrificed his truest self to the demands of society and family, Tom Outland is equally haunted by the way he betrayed his friendship with Roddy Blake, who had committed the crime of selling Indian relics to a German buyer: "Anyone who requites faith and friendship as I did, will have to pay for it." [229] Does Tom suffer from his inhuman idealism just as the professor suffers from his unthinking compromises? In what other ways does Cather introduce ambiguity into this novel’s moral scheme? Does she suggest any way in which her opposing values might be reconciled?

9. Where does Cather draw analogies between St. Peter’s betrayal of his ideals and events in the larger world? In what ways does the novel’s milieu function as a macrocosm of its protagonist’s psyche?

Comparing My Antonia and The Professor’s House:

1. How does the small university town in The Professor’s House resemble or differ from My Antonia‘s Black Hawk? To what extent are those differences due to the different historical eras in which the two novels are set? Read together, what kind of relationship do these novels posit between towns and the prairie? Which region does Cather seem to identify with the "best times" of My Antonia‘s Virgilian epigraph?

2. How do the female characters in The Professor’s House compare with those in My Antonia? How do both sets of women confirm or challenge stereotypes about their gender? What significance do you see in the fact that Antonia marries relatively late, and her friends Lena and Tina not at all, while the St. Peter women have married early? What role does class play in Cather’s treatment of her female characters?

3. Why is suicide a theme in both novels? What do Cather’s suicides appear to have in common? Does she seem to associate the act with moral failure or mental breakdown or portray it as a natural, and even honorable, response to intolerable circumstances? What role did suicide play in the age and society in which Cather wrote? (You may want to look at such novels as Sister Carrie to see how some of her contemporaries treated the same theme.)

4. Given the evidence of these novels, how does Cather seem to view relations between the sexes? What prospects of happiness and fulfillment do they hold for both men and women? Which of her characters ends up happily married and for what reasons? Why do so many others–from Jim Burden to Godfrey St. Peter–end up regretting their attachments?

5. The Professor’s House has as its epigraph, "A turquoise set in silver, wasn’t it?…Yes, a turquoise set in dull silver." Although these words of Louie’s describe a ring that Tom once gave Rosamund and thus allude to the abandoned cliff-dwelling where Tom presumably unearthed it, they may also refer to the structure that Cather uses in this novel. Discuss the way in which the author embeds Tom Outland’s narrative within the professor’s story. What similarity do you see between this strategy and the embedded narratives in My Antonia?

6. In both My Antonia and The Professor’s House Cather uses two sorts of language, one conventional and expository, the other heightened and rhapsodically sensual, a language attuned to colors, fragrances, and grand effects of light and shadow. Where does she employ these different kinds of prose, and to what effect?

Willa Sibert Cather was born December 7, 1873, near Winchester, Virginia. When she was about ten years old her family moved to Red Cloud, Nebraska, where many of her novels and short stories are set. "I felt a good deal as if we had come to the end of everything," she told an interviewer many years later. "It was a kind of erasure of personality."

A Month in the Country
J.L. Carr

We Were Never Here
Andrea Bartz
Back to Top