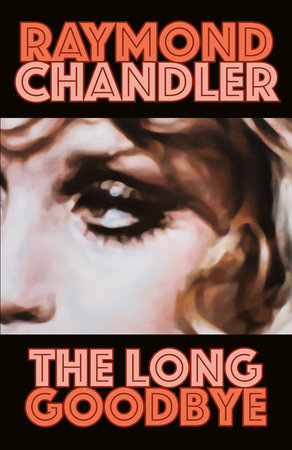 The questions, discussion topics, and author biography that follow are designed to enhance your reading of this outstanding selection from the "hard-boiled" school of crime writing: The Long Goodbye by Raymond Chandler. We hope that it will provide you with new ways of looking at–and talking about–the nature of detective fiction, as well as give you insight into how the hard-boiled style of writing emerged in the genre; how the style was shaped by twentieth-century American culture and by the lives of the men who created it; and how this form of writing has subsequently affected the way we view ourselves as Americans.

The sixth in the Philip Marlowe series, The Long Goodbye is significant not only as the last book Raymond Chandler wrote but as a personal consummation of craft that brought his detective novels into the realm of distinguished fiction. "The first time I laid eyes on Terry Lennox he was drunk in a Rolls-Royce Silver Wraith outside the terrace of The Dancers" [p. 3], Marlowe explains in an extraordinary opening line that establishes wealth, trouble, and the central figure of conflict in the story. Taking pity on Lennox, Marlowe brings him home to sober up. They begin a casual friendship, meeting for gimlets at Victor’s; Marlowe learns that the scars on his face are mortar wounds and that he is married to the promiscuous daughter of multimillionaire Harlan Potter. Something in Lennox’s character interests Marlowe, enough that he doesn’t question why Lennox is asking for help getting to Mexico right after his wife has been brutally murdered. Marlowe does help, and is arrested and jailed. When Lennox turns up a suicide with a signed confession in Otatoclán, it gets Marlowe out of jail, but it does not get Lennox out of his life.

Gangsters, writers, publishers, quacks, and, of course, beautiful women enter Marlowe’s life after Lennox’s suicide, but not all meet on a trail readily connected to the solution of Sylvia Lennox’s murder. Nor is it so apparent that Marlowe seeks to vindicate his dead friend, either. All we know is that Marlowe does not believe the Terry Lennox he knew was capable of such a vicious crime. The brief friendship has struck a sympathetic chord in him. In the hard-boiled world, no detective would ever give voice to feelings like these, and Marlowe doesn’t. But such is the power and subtlety of Raymond Chandler’s writing that we are always conscious of his central character’s deep well of loyalty at work, driving this longest of goodbyes.

1. "The weather was hot and sticky and the acid sting of the smog had crept as far west as Beverly Hills" [p. 238]. Los Angeles becomes a virtual character in Chandler’s fiction in his trenchant descriptions of its climate, streets, traffic, buildings, bars, and restaurants. What place descriptions are especially evocative, or is locale so skillfully integrated with action that only an overall impression is retained? Did any descriptions strike you as being from another Los Angeles, the one of fifty years ago? Which could apply to your impressions of Los Angeles today? What influence might growing up in England have had on Chandler’s perspective of Southern California?

2. Philip Marlowe is a long way from the "infallible sleuth," the English, Sherlock Holmes-style ancestor of the hard-boiled fictional detective. In The Long Goodbye, Marlowe lands in jail on a bum rap and gets conked over the head a few times; as for his desire to solve the case, it’s hard to pin down if he’s trying or not. What replaces old-fashioned sleuthing and tight plotting in terms of dramatic tension?

3. The "hackie" Marlowe hails to bring Lennox home has "stuck a magazine with a Martian on the cover behind his mirror" [p. 10]. Potent details like these belong to the short but vivid appearances of the many bit players that appear in the story. Minor characters like the Wades’ burly houseboy, Candy, of the mysterious nationality that becomes a running joke are often developed beyond what the plot demands. Is this a device to heighten suspense, a distinctive Chandler style? What other minor characters stand out?

4. "There are blondes and blondes and it is almost a joke word nowadays" [p. 89] is Marlowe’s acerbic observation after spotting the beautiful Eileen Wade enter a hotel bar. Marlowe often classifies people as types, which is a hallmark of genre detective fiction. Does this help or hinder the characterization of Marlowe? What other elements in The Long Goodbye identify it as genre writing? What elements transcend genre?

5. Chandler’s literary agent and editor objected to the "sentimental" Marlowe found in The Long Goodbye; see Frank MacShane, editor, Selected Letters. If sentimentality is construed as an aspect of the Marlowe-Lennox relationship, what quality or qualities in Lennox would have affected Marlowe in this way? Chandler ultimately acquiesced to his critics and made a change in the ending. How does he manage to avoid sentimentality in Marlowe’s final scene with Lennox?

Raymond Chandler, born in Chicago on July 23, 1888, emigrated with his family at the age of twelve to England, where he was educated at Dulwich College. He took a civil service job in London and contributed to literary weeklies. Dissatisfied with his progress as a writer, in 1912 he moved to Los Angeles and worked briefly as a bookkeeper before serving in the Canadian army and the R.A.F. in World War I. Upon his return to California, he took a job as an executive with an oil company and, in 1924, married Cissy Pascal, a pianist seventeen years his senior. After ten years at Dabney Oil, a period in which he wrote barely at all, he was fired for alcoholism. It was then that he turned to writing pulp detective stories, publishing his first at the age of forty-five in Black Mask. His first novel, The Big Sleep, in 1939, sealed his membership in the hard-boiled school of crime fiction.

Trouble Is My Business
Raymond Chandler

In the Cut
Susanna Moore