Colors of the Mountain Reader’s Guide 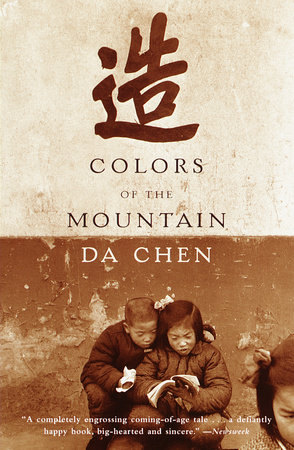 Colors of the Mountain Reader’s Guide

The questions, discussion topics, and author biography that follow are designed to enhance your group’s discussion of Colors of the Mountain, Da Chen’s touching, often funny depiction of the hardships, adventures, and dreams of a child living in a world turned upside down. For ten years, Mao’s Cultural Revolution swept across China, leaving death and devastation in its wake. Accused of holding counterrevolutionary values, the middle classes—landlords, doctors, teachers, and intellectuals—were severely persecuted and suffered great deprivations. Colors of the Mountain, Da Chen’s memoir of his childhood as the grandson of a landlord in a rural village, offers a unique perspective on this infamous period.

The youngest of five children, Da Chen was born in 1962 in the small village of Yellow Stone. His family, once one of the most respected in the village, loses everything under the brutal policies of the Cultural Revolution. His grandfather, who owned land and several local stores, is stripped of his property, publicly humiliated, and beaten by hostile neighbors and power-happy Communist officials. His father is fired from his teaching job and periodically hauled off to the labor camp to be "reformed." His older siblings, forced to leave school because of their ancestry, toil for long hours in the rice fields. At an early age, Da Chen learns that ordinary trips to the commune’s grocery store and to neighborhood yards where other children play are perilous undertakings, exposing him to ugly taunts and vicious harassment.

In the face of adversity and injustice most of us cannot imagine, Da remains feisty, mischievous, and determined to prove his own worth. Mocked by teachers and denounced as a counterrevolutionary by the principal, he nonetheless becomes the star pupil in school and excels in his private English lessons with an elderly retired professor. Ostracized by his classmates, he is taken in by a group of older boys whose genuine affection for him and for one another belies their notoriety as reckless troublemakers. Da’s intelligence and drive, however, are continually undermined by the arbitrary rules of the Communist regime. His dream of college is nearly destroyed when the school board decides that the members of his family have "had enough education," but it reverses its decision when the Cultural Revolution is abruptly abandoned in the upheaval following Mao’s death. As new leaders rise to power, the once-hated intellectuals are restored to honor and position. For Da and his family, the promise of a better future finally becomes a reality.

As he weaves together chilling vignettes of an abusive society and loving, evocative scenes of family life—grand feasts on New Year’s Day, flute lessons with his father, storytelling sessions with his grandfather, and mornings of prayer at his mother’s side—Da Chen not only offers a unique portrait of an era, but also evokes the universal experiences of childhood.

1. Da Chen’s mother has taught her children "to be quiet, stay out of trouble, and wait for better days" [p. 4]. Given their position in the village, is it possible for them to follow this advice? Is Da’s grandfather’s rebellious behavior a more natural reaction to the cruel and arbitrary rules imposed during the Cultural Revolution? In what ways does his mother show a spirit of defiance, and what impact does this have on Da’s character?

2. When his teacher chooses him as class monitor, Da writes, "I was born with a political defect that no one could fix. But once in a while they threw a bone out to us . . ." [p. 15]. What does this tell you about Da’s sense of himself? Why does he become so popular with the other students, despite his "political defect"? Later, when the Communist party escalates its campaign against former landowners and intellectuals, Da is ostracized by his new teacher and his classmates. Could a more sympathetic teacher have made a difference?

3. Are Da’s descriptions of his life at school unique to his circumstances? Or do his experiences—for example, his feelings about being excluded from the Red Guards [p. 23] and reactions to Han and his gang [p. 41]—resemble incidents that might be experienced by every school-age child? How do they differ from the experiences of a child going to school in America?

4. Why is praying to Buddha with his mother so important to Da? Beyond its religious significance, what role does it play in their lives? Why does the family maintain traditions like the opulent New Year’s Day feasts even during the most difficult times? What events in the book show the extraordinarily close ties among the family members? For example, what do you learn about Da’s brothers and sisters when he helps them in the fields [pp. 164-66]? How do the familial relationships Da describes differ from those in American or other Western families? Do you agree with Da’s description of his father as "the dreamer" and his mother as the more practical parent [p. 217]?

5. Da objects strongly to the corruption and bribery rampant in the commune, yet when he is forbidden to continue his education, his father, an acupuncturist, treats the principal’s ailing father, and Da is allowed back into school [p. 125]. Da’s father is also treated well at the reform camp because of his medical skills [p. 113]. Do Da’s father’s actions compromise his integrity?

6. When Mao dies, why does Da say, "In my heart, there was no other leader who mattered as much to me . . . good or bad. . . . Even though my parents’ generation hated him, I had embraced him in my own way" [p. 138]? Compare this passage to his sharp criticism of Mao [pp. 256-57]. Is the ambiguity that Da feels understandable? Does the book offer any evidence, either explicit or implicit, that Mao made positive contributions to Chinese life and society?

7. In addition to teaching Da English, how does Professor Wei expand his view of the world? Why does the fact that the Wei sisters are "the closest thing to real Westerners" in the village [p. 154] enhance their status even though the government is so vehemently opposed to the West? How does Da bring to life the closeness between the shy, awkward boy and the elegant, elderly professor?

8. How does the summer Da spends working at a factory enrich your impressions of him? In what ways is he more mature than an American child of his age? More naive?

9. The contradictions between the Chinese government’s austere policies and life as it was actually lived by party officials [pp. 180-81] appears to reveal the profound hypocrisy of Mao’s rule. How do these hypocritical tendencies differ from those of governments in the rest of the world?

10. Da recalls his difficulty with the English language in a wonderfully charming and funny way [p. 212]. How does his confusion offer insights not only into his impressions of the English-speaking world, but also into Chinese culture as well?

11. When Da and Jin are admitted to college, some of the villagers write letters of protest to the government. Da says, "It was okay to let people know when you were suffering, but not when you were celebrating" [p. 295]. What motivates the villagers? How universal are their sentiments and their actions?

12. At times, Da seems too perfect. He even says of himself, "Most of [my classmates] hated me because I was arrogant, pompous, and too much of an artistic star" [p. 192]. In what ways is he just an ordinary boy, sharing the familiar concerns and anxieties of childhood? How does the narrative convey this? Does the memoir succeed in presenting a balanced and believable portrait of a young boy?

13. How do the style and language of Colors of the Mountain contribute to the effect the book has on readers? While Da and his friends use slang and obscenities and tease each other about girls in the familiar manner of young boys, many of Da’s thoughts and observations are presented in poetic language. For example, in describing his visit to his cousin on an isolated island, he writes, "Staring at the stars through a wide skylight, I heard the lulling sound of the ocean. The rhythm of its waters sounded like an . . . ancient legend as the waves lazily washed against the shore" [p. 46]. Do these voices seem equally authentic?

14. Da Chen takes the title of his book from a couplet his grandfather painted on the old Chen mansion—"Colors of the mountain will never leave our door/Sounds of the river will linger forever in our ears." How do the themes of the book embody the poem’s message?

15. Da Chen is now in his late thirties and has achieved success as a university professor and lawyer, yet he presents his story through the eyes of a child. Why does he choose to present his story that way? How do his perceptions and feelings as a young boy shape his depiction of life in China? Would other members of his family have told the same story?

16. Many memoirs such as Anne Frank’s The Diary of a Young Girl and Maya Angelou’s I Know Why the Caged Bird Sings deal with the profound impact of political upheavals, class conflict, and racial prejudices on ordinary people. How does Colors of the Mountain compare with other memoirs in this genre?

Da Chen graduated from Beijing Language Institute with top honors and then served as an assistant professor at the school. At the age of twenty-three, he came to America and won a full scholarship to Columbia University Law School, and after graduation worked for the Wall Street firm of Rothschild, Inc. He lives in New York’s Hudson Valley with his wife, who is a physician, and their two young children.
Learn More About Colors of the Mountain
print