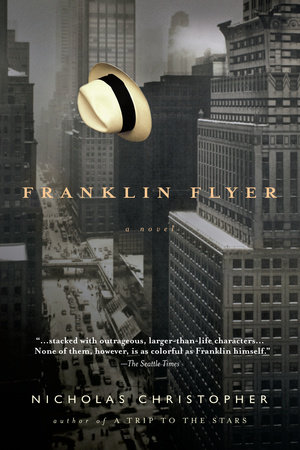 In this shimmering work of fiction, Nicholas Christopher follows the remarkable life of Franklin Flyer–a restless young inventor named after the train on which he was born–through the tumultuous years of the Great Depression, into the Second World War.

Raised by his suffragette aunt, at various times a vagabond and tycoon, Franklin travels across the U.S.A and around the globe, seeking adventure and enlightenment, charting his fate by pursuing the unexpected.

He encounters a glittering cast of characters: among them Rita Hayworth, Josephine Baker, OSS founder “Wild Bill” Donovan, and a host of political zealots, opportunists, and dreamers thrown together in a world on the brink of collapse.

With each new invention–devices that help to revolutionize everything from early television to the technology with which the Allies respond to the Axis powers–Franklin makes his mark. Gaining fame and fortune, he also suffers terrible heartbreak, and through numerous transformations discovers that a man’s own life is truly his most difficult, and rewarding, invention.

A brisk, vivid blend of history and imagination, Franklin Flyer brings to life an American hero as unforgettable as his times. 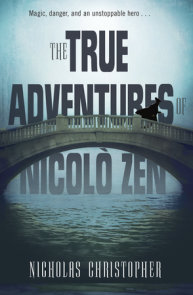 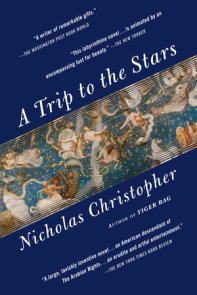 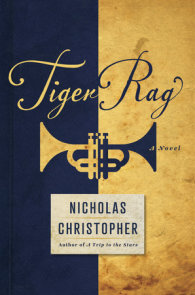 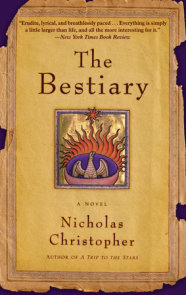 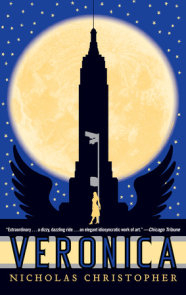 See all books by Nicholas Christopher

Nicholas Christopher is the author of six novels: Tiger Rag, The Soloist, Veronica, A Trip to the Stars, Franklin Flyer, and The Bestiary; eight books of poetry, including his new and selected poems, Crossing the Equator; and a book on… More about Nicholas Christopher

“The novel is stacked with outrageous, larger-than-life characters…None of them, however, is as colorful as Franklin himself.”
—The Seattle Times


“A special novel…Christopher’s blending of fact and fiction is admirably seamless…A book that the reader will wish had a few–no, make that quite a few–more pages.”
—The Denver Post

“If Graham Greene collaborated with the creator of Dick Tracy, the result might read like this quirky, whirlwind tale of ordinary men contending with a worldwide Nazi conspiracy.”
—Publishers Weekly

“The novel’s…action [is] freighted with fatality and symbolism…[Franklin Flyer] is an exemplary young American of his time: bright, talented, handy with his fists, an inventor and a patriot.”
—L.A. Times

“Using crisp, vivid and charged language, Christopher creates a series of colorful tableaux through which the eponymous hero glides like a double agent in a thriller.”
—BOMB Magazine

“A pleasure to read…Positively glow[s] with descriptive grace…A lovely investigation of ‘the only mystery worth pursuing,’ the metamorphoses of the human spirit, observed at both stillness and breakneck speed.”
—The Washington Post Book World

“Here is a happy surprise, a book that is highly entertaining, ingenious and a delight for the imagination…the writer constructs an old-fashioned romance in an entirely pleasing way. Nicholas Christopher leads us into a world that never really existed but for which we still yearn.”
—Newark Star-Ledger (NJ)

“A lovely blend of fantasy and history.”
—Booklist

A Trip to the Stars

“This labyrinthine novel . . . is animated by an encompassing lust for beauty. . .Christopher. . .offers us an alluringly baroque vision of hedonism–the American dream run wild.”
–The New Yorker

“Christopher is a writer of remarkable gifts; he weaves fascinating and esoteric material into a story where such diversions never seem out of place.”
–The Washington Post Book World

“Christopher is North America’s García Márquez; Borges with emotional weight. . .This is one of those rare books that, by connecting with the stars, catches you in its web.”
–Toronto Globe & Mail

“Hip, sexy . . . a novel in which anything can happen . . . Mr. Christopher is a superbly lyrical and descriptive writer.”
–The New York Times Book Review

“Satisfying as the storytelling is, the deeper pleasures here stem from the author’s imaginative and idiosyncratic scholarship, by means of which the uncanny is made to seem commonplace and the commonplace unfathomable.”
–The New Yorker

Statement on Franklin Flyer for BOLD TYPE
by Nicholas Christopher

Franklin Flyer synthesizes themes from my previous eleven books of fiction and poetry and my one nonfiction book, a study of film noir. There are certainly noir elements at work in this new novel.

Franklin Flyer follows the life and adventures of a young American inventor during the Great Depression and the onset of the Second World War. Named after the train on which he was born in 1907, Franklin Flyer is raised by his suffragette aunt, a very modern woman for her day. His mother is an itinerant, down-at-heels Shakespearean actress who dies young; his father a shadowy soldier of fortune whom he never meets. Franklin Flyer himself drops out of Harvard, where he excelled at chemistry and baseball, and over the years works as a ship’s carpenter, an expedition guide in the Andes, an interpreter, a laboratory assistant, an illustrator of pulp magazines, a publisher, and an OSS agent. Over the course of the Great Depression, he rises from vagabond to tycoon. A fervent antifascist, he encounters, and locks horns with, rabid members of some of the fascist movements on the rise through the 1930s: the Romanian Iron Guard, the Spanish Falangists, the British Fascist Party, the German-American Bund, and the Mexican Sinarquistas.

Franklin Flyer spans a crucial arc in U.S. and world history, beginning on the day the stock market crashes in September 1929 and concluding soon after the attack on Pearl Harbor in December 1941. Franklin’s life is a journey marked by unexpected — and illuminative — transformations. He crosses paths with a wide cast of characters, including Rita Hayworth, Josephine Baker, OSS founder “Wild Bill” Donovan, radio pioneer David Sarnoff, and a host of fellow inventors, political zealots, eccentrics, and dreamers thrown together in those tumultuous times. He drinks cocktails with President Roosevelt, attends the 1939 World’s Fair as a distinguished guest, and watches Lou Gehrig’s last World Series game from front-row box seat at Yankee Stadium. His inventions run the gamut: a self-patching automobile tire; a paint-shaking machine; a cathode-ray tube that revolutionizes early television; and, most significantly, some of the wartime technology (night-vision goggles, submarine sonar) the Allies employ against the Axis powers.

Franklin Flyer is emblematic of his times, a picaresque hero in the tradition of Tom Jones, Roderick Random, Don Quixote, and Augie March — novels that take us on simultaneous journeys, into the hero’s soul and the teeming world that surrounds him. Only when these respective journeys become inextricable can our hero discover who he truly is. Such is the case with Franklin. His world is, for the most part, the sprawling, industrialized metropolis of the Depression years — Chicago and New York — from which he makes significant forays into the harshly segregated Deep South, revolutionary Buenos Aires, and European cities like Athens, Marseille, and Milan that have fallen under the heel of the Axis powers. All of these places are breeding grounds for the noir sensibility that will fully take hold in American culture in the ensuing decade, as a style and a means of expression, in film noir, bebop jazz, hardboiled fiction, and the paintings of Edward Hopper, Georgia O’Keeffe, and Franz Kline. Prohibition, gangsterism, drug running, social disorder, and political fanaticism are staples of the noir universe; and all of them, to varying degrees, fed into the imaginative vision that informed my narrative of Franklin Flyer’s life and times.

Franklin’s encounter with racists in Alabama, Bund enforcers in Manhattan, and Axis agents abroad; his glimpses of corruption in high places; his dealings with unscrupulous “America First” millionaires who only thinly disguise their affinity for Nazi Germany are all noir elements that change the course of his life. Franklin’s stormy love affair with Narcissa Stark, the black doctor’s widow who becomes a famous singer, takes him into the nascent world of blues recording, race records, and black nightclubs in Chicago in the early thirties. Franklin also falls in love with a budding fashion designer (and press agent to the discoverer of bubblegum) named Pamela LeTrue, an Egyptologist, Persephone Eckert, who becomes a movie studio executive, and an unusual OSS agent, Agnes Davelle. The netherworld of Egyptian mythology, which he explores with Persephone, is another noir element in the novel, as is the very different netherworld of modern espionage, in which he becomes an unlikely player at Agnes’s side. The birth of the modern U.S. intelligence service — the OSS — during the crucible of the Second World War is one of the darkest byways in the labyrinth of Franklin’s life. A millionaire himself at the time he is recruited, he becomes one of “Wild Bill” Donovan’s “gentleman agents,” traveling in and out of the Axis countries at great risk to himself and others, including Agnes, a courageous and resourceful woman from whom he learns some hard lessons about pain, sacrifice, and the geography of fear.

Franklin Flyer is an inventor in the deepest sense of the word. In the end, these four women lead him to the crucial understanding that, with good fortune and tireless effort, in the end his own life must be his most difficult, and rewarding, invention.