Love Among the Ruins Reader’s Guide 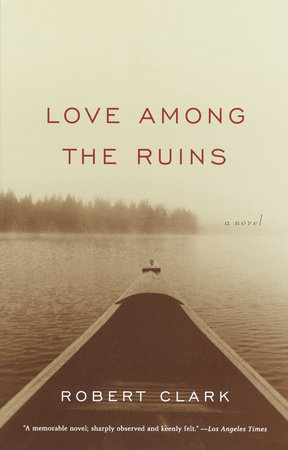 Love Among the Ruins Reader’s Guide

“Clark uses fiction in its highest and best sense, to explore the questions that haunt the human heart.” —Seattle Times

Set against the backdrop of the social revolution of 1960s America, Love Among the Ruins explores the intensity of teenage love, the complexities of adult relationships, and the loss that characterizes them both. The introduction, discussion questions, suggested reading list, and author biography that follow are intended to enhance your group’s reading of this eloquent and penetrating novel by an award-winning novelist.

It is 1968: one year after the Summer of Love. Bobby Kennedy has just been killed, and the antiwar riots of the 1968 Democratic National Convention in Chicago are about to break out. In the midst of this social and political turbulence, two ordinary teenagers in Minnesota fall into an ardent love affair that leads them on a radical—and ultimately tragic—course. The relationship of sixteen-year-old Emily and seventeen-year-old William starts out innocently enough—they exchange awkward, pensive letters the week of Bobby Kennedy’s death and go on a few dates—but as the summer progresses, they find that they are deeply in love. Catholic Emily believes God manifests himself in her physical passion for William, and she therefore gives herself and her trust completely to him. William, on the other hand, is uncertain of himself and afraid in a vague sort of way of the draft, of the government, of a police state. To seek freedom from what they view as an impending political siege at the end of the summer, William and Emily go to Canada, where they intend to live off the land. Neither William’s mother Jane, the Democratic activist, nor Emily’s parents (her adoring father, Edward, and her mother, Virginia, a devout Catholic) can believe that—or, more significantly, understand why—their children ran away. The stunned parents are left behind to cope with Emily and William’s disappearance and to rebuild their own disrupted lives—lives that will never be the same once the tragic resolution to their children’s summer romance is reached. The heartbreaking loss endured by these families casts a permanent shadow over the rest of their lives, much as the specter of the 1960s permanently transformed the American experience throughout the remainder of the twentieth century.

1. What important message does William try to convey to Emily in the letter that opens the novel? Why might Clark have chosen this beginning to his story, a beginning that is based on William’s personal revisionist version of history?

2. Can William’s and Emily’s actions be best understood as a product of the 1960s or of teenage love in general? Do their actions become more or less comprehensible to Edward and to William himself in retrospect? Does William come to regret his actions of the summer of 1968?

3. Emily’s father has a box of possessions that “struck her as assuredly the property of a boy who had subsequently become a young man” [p. 29]. Six pages later, William’s boyish belongings are enumerated [p. 35]. What is the significance of the juxtaposition of the younger Edward and the teenage William? Where else in the novel does Clark draw an analogy between the two? What has Edward lost that William currently possesses, and what has Edward gained that William does not yet have?

4. The novel opens with one death—that of Robert Kennedy—and closes with another. How is the latter a metaphor for the former? Might the entire novel be read as an allegory of United States history in the 1960s? What do Edward, Virginia, William, and Jane represent in this interpretation?

5. Why might Clark use certain labels, such as “the Summer of Love” [p. 59], “the thirty-fifth year of the existential era” [p. 59], and “the Age of Anxiety” [p. 168], to describe the 1960s, and yet resist naming certain cultural events in the novel, such as the movie that Jim and William saw together [p. 38], the specifics of “the events in Chicago” [p. 145], and the Mahler piece to which Jane and Edward listened [p. 255]? Does Clark’s deliberate vagueness about certain specifics lend credence to his assertion that history seems to befall us as we sleep, without our actual participation [p. 31]?

6. Does Emily’s Catholicism deviate from her mother’s, and if so, how? Do William and Emily feel very differently about the existence of God [pp. 73–4]? Do Edward and Jane appear to have any religious beliefs? Do the characters’ religious beliefs, or lack thereof, help explain their actions?

7. What does Clark mean when he writes, “for Emily and William music was both history and prophecy” [p. 56]? How is music also “both history and prophecy” for Edward and Jane? Music shows Emily and William “how to see the world and themselves, not because they were empty-headed, but because there was such a surfeit of world and selves to see; because you could sit and stare as William stared at Emily—just one girl in one medium-sized city of no particular account—and be dumbfounded” [p. 56]. How does music put into perspective the smallness of people in the grand scheme of human history, yet simultaneously illustrate people’s capacity for great depth of feeling?

8. In his opening letter to Emily, the adult William alludes to his feeling of having failed his children [p. 12]. Have the parents in the novel failed their children? What do William and Emily learn from their parents?

9. “Emily lived in a nation and a culture at war with the body and its more troubling manifestations (its unseemly and inconvenient needs and wants and especially its penchant for death); a whole culture dedicated to pitting the virtues of the mind against pesky corporeality” [p. 100]. How do Emily’s struggles with sex, religion, and love compare to Edward’s struggles with sexuality and love, as expressed in his conversations with Dr. Fields [pp. 22, 116–121, 229–232]? How are both the father’s and the daughter’s struggles with sex reflective of the nation’s cultural and social struggles?

10. Emily’s train of thought on the intersection of mind, body, and God permits her to reach the conclusion that she desires and be able to have a guilt-free sexual relationship with William [p. 100]. Is Clark’s portrait of teenage love accurate?

11. The unfolding of events begins with the coincidence of Edward spotting William’s lost dollar bill on his way home from work, which Edward ironically views as a good omen [p. 23]. Is Edward’s happiness an illusion? Is he an optimist or a fool, or both? Do you think that the events that followed in Edward’s and William’s lives were inevitable, fated, or tragically coincidental? Do the events—both personal and historical—that occur in the novel bear out Clark’s assertion, “The world, of course, is deeply contingent, and we are doubtless fools to believe we are ever free from its accidents or the purposes and deeds of others. But we enjoy the illusion—or the promise, for those inclined to belief—that we can act a little in our lives and the lives of our fellows, and not always for the worse” [pp. 172–3]?

12. What is love? Is it “best,” as Robert Browning asserted in his poem from which the title of the novel is taken [p. 107]? Is it a Pavlovian call to sex, as Dr. Fields theorizes [p. 119]? Or is it elusive, as Jane thinks, “grasping the hard fact that time runs in only one direction, that we have already died a thousand deaths and will die a thousand more, and that there is no remedy for it but love, though we are sure we have never seen love except in the rearview mirror, in the sad and tawdry puddle at the bottom of the glass” [p. 160]?

13. Clark frequently employs foreshadowing, for example, Emily’s telling William the story of the poets Robert and Elizabeth Barrett Browning running away together [p. 108], the hint of attraction between Edward and Jane at their first meeting at the Byrnes’ house [p. 127], and Virginia’s reading of the article in McCall’s entitled “Can This Marriage Be Saved?” [p. 163] How does this technique promote the themes of the novel? How does it affect the reader’s distance from the events?

14. What propels Edward and Jane together? Why does Edward give up visiting Jane when he does? Is there any significance (or irony) in the fact that both Emily and Edward end their affairs with a Lowry at about the same time?

15. What do William and Emily lose when Robert Kennedy dies? What do Jane, Edward, and Virginia each lose when their children run away? Does anything positive result from these losses? Can Love Among the Ruins be characterized as a tragedy? If so, are there any tragic heroes or heroines in the classical sense of the term?

16. By viewing William’s and Emily’s letters for the first time through the eyes of their parents, is the reader persuaded that there was never anything more to William and Emily’s relationship but “childish nonsense” in which “trivialities become profundities and that which ought to mean everything means nothing at all” [p. 190]?

Robert Clark is a native of St. Paul, Minnesota, and currently resides with his wife and two children in Seattle, Washington. In 1999, his second novel, Mr. White’s Confession, received both the Pacific Northwest Book Award for Fiction and the Edgar Award for Best Novel.

For cultural and historical background:
Norman Mailer, The Armies of the Night: History as a Novel, The Novel as History; Kurt Vonnegut, Jr., Breakfast of Champions; Herman Hesse, Narcissus and Goldmund; Hart Crane, The Complete Poems of Hart Crane; Alan Watts, The Book: On the Taboo Against Knowing Who You Are; Jack Kerouac, On the Road; Peter Franklin, The Life of Mahler (Musical Lives).
Learn More About Love Among the Ruins
print
Back to Top