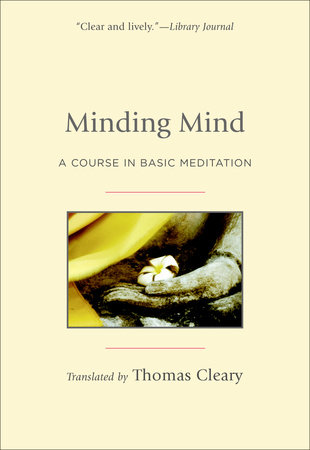 A Course in Basic Meditation

Minding Mind is an extraordinary compendium of instruction manuals dealing primarily with ways of attaining the mode of experience characteristic of the highest form of meditation in the Zen tradition—pure, clear meditation arriving at being-as-is. The seven meditation manuals included here are some of the greatest treasures of the Zen tradition.
·         The Treatise on the Supreme Vehicle is attributed to Hongren (602–675), who is known as the Fifth Patriarch of Chan Buddhism in China. The method taught in this manual is basic and quintessential in theory and practice, setting the stage for the texts that follow.
·         Models for Sitting Meditation was composed by Chan Buddhist Master Cijiao of Changlu in late eleventh-century China. Little is known of Cijiao, except that he was not only a master of the powerful Linji school of Chan Buddhism but also a patriarch of popular Pure Land Buddhism. The combination of Chan and Pure Land Buddhism, especially in the domain of concentration technique, is commonly found in the records of early meditation schools of China, Korea, Japan, Tibet, and Vietnam.
·         Guidelines for Sitting Meditation was written by Foxin Bencai, a younger contemporary of Cijiao. The instructions of Foxin and Cijiao, both quite brief, address problems of deterioration in the quality of meditation practices and prescribe simple remedies to counteract confusion and misalignment in order to foster the proper state of mind.
·         One of the main concerns of Dogen’s teaching activity was to alert people to the shortcomings and dangers of incomplete Zen meditation and partial Zen experience. In A Generally Recommended Mode of Sitting Meditation, one of Dogen’s first written works, reflects this concern and outlines an approach to its resolution.
·         Secrets of Cultivating the Mind was composed by Chinul (1158–1210), founder of the Chogye order of Korean Buddhism. Ordained as a monk at the age of eight, Chinul had no teacher. His first awakening occurred as he read a Chan Buddhist classic when he was twenty-five years old. After that, Chinul went into seclusion in the mountains. Later he perused the whole Buddhist canon and went back into solitude in a mountain fastness. During this period, Chinul experienced another awakening while reading the letters of one of the great Chinese masters. Based on classical teachings, Chinul’s Secrets of Cultivating the Mind is a highly accessible primer of basic Buddhist meditation, defining and contrasting the principles and methods of sudden and gradual enlightenment.
·         An Elementary Talk on Zen is attributed to Man-an, an old adept of a Soto school of Zen who is believed to have lived in the early seventeenth century. Man-an’s work is very accessible and extremely interesting for the range of its content. In particular, it reflects a modern trend toward emphasis on meditation in action, which can be seen in China particularly from the eleventh century, in Korea from the twelfth century, and in Japan from the fourteenth century.

·         Also included in this collection is Absorption in the Treasury of Light, written by Dogen’s main student, Ejo (1198–1282). Born into an ancient noble family, Ejo became a Buddhist monk at the age of eighteen. Reflecting Ejo’s background in the esoteric branch of Tendai Buddhism as well as his classical Zen studies, this work shows how to focus on the so-called Dharmakaya, or Reality Body teaching of Buddhism, underlying a wide variety of symbolic expressions. This type of meditation, using scriptural extracts, poetry, and Zen koans (teaching stories) to register a specific level of consciousness, is called sanzen. There is a great deal of Zen literature deriving from centuries of sanzen, among which Ejo’s Absorption in the Treasury of Light represents a very unusual blend of complexity and simplicity, depth and accessibility.