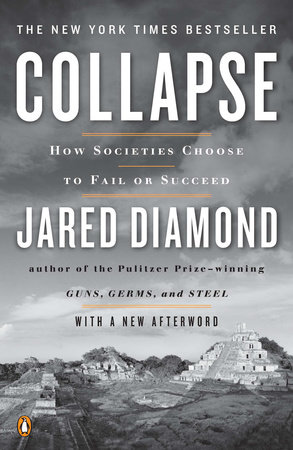 In the American Southwest, an ancient city of intricate masonry rises from the floor of an utterly desolate canyon. A roofless but intact Norse church perched over a fjord in Greenland attests to a Christian colony that flourished for hundreds of years—but not a single survivor remains. In Australia, sheep and rabbits compete for sparse vegetation in vast prairies that were thick with native grasses two centuries ago. Haiti and Rwanda, both desperately overcrowded and environmentally degraded, have repeatedly exploded in appalling violence.

What do these seemingly random scenarios, remote from each other in space and time, have in common? In Collapse, Pulitzer Prize–winning author and UCLA professor Jared Diamond supplies the key. Like his previous book, the international bestseller Guns, Germs, and Steel, Collapse is a monumental study of the interaction between history, culture, climate, and the environment—but from the other side. Where Guns, Germs, and Steel examined how and why Western civilizations came to dominate the world, Collapse probes the mysteries of why cultures decline suddenly and catastrophically—often immediately after reaching their peak. In Collapse, Diamond broadens his perspective and his reach as he links the crash of past civilizations—including the Anasazi of the American Southwest, the Maya of Central America, the Norse colonists of Greenland, and the Polynesian creators of Easter Island’s famed monumental statues—with what is happening today in troubled nations around the world.

Diamond opens with a chapter about the spectacular Bitterroot Valley in western Montana, a choice that he acknowledges may initially seem puzzling. What could the Bitterroot with its ranches and trout streams and inspiring mountain vistas share with the desolation of the Anasazi ruins in Chaco Canyon or the bare eroding hillsides of Haiti? As the narrative unfolds, the parallels become unmistakable and increasingly alarming. Diamond identifies five sets of factors that precipitate societal collapse: environmental damage like deforestation, pollution, soil depletion, or erosion; climate change; hostile neighbors; the withdrawal of support from friendly neighbors; and the ways in which a society responds to its problems, be they environmental, political, or social.

These five key factors played out in different ways in each of the historical societies Diamond studies. For example, deforestation and a prolonged drought combined to ignite the Anasazi collapse, while the Maya cities fell on account of overpopulation, environmental degradation, a sharp increase in warfare, and poor leadership. All five factors worked together to undermine and finally destroy the Norse colonies that had flourished on Greenland for nearly five centuries. When Diamond turns from past to present, it becomes clear that the conditions for collapse are now coming to a head in the nations of major world powers like China and Australia as well as in political flash points like Iraq and Indonesia. In the context of Diamond’s sweeping synthesis, the opening chapter on Montana’s Bitterroot takes on a stark new meaning. The conclusion is inescapable that collapse can and will happen again, even in a seemingly blessed nation like ours, unless we recognize the warning signs and choose to act responsibly.

How can we avoid destroying our world—and our own species? It is a tribute to Jared Diamond’s brilliance and intellectual honesty that he poses this question not in fear but with courage, lucidity, and cautious hope.

Jared Diamond is a professor of geography at the University of California, Los Angeles. He began his scientific career in physiology and expanded into evolutionary biology and biogeography. He has been elected to the National Academy of Sciences, the American Academy of Arts and Sciences, and the American Philosophical Society. Among Dr. Diamond’s many awards are the National Medal of Science, the Tyler Prize for Environmental Achievement, Japan’s Cosmos Prize, a MacArthur Foundation Fellowship, and the Lewis Thomas Prize honoring the Scientist as Poet, presented by the Rockefeller University. He has published more than two hundred articles in Discover, Natural History, Nature, and Geo magazines. His previous book, Guns, Germs, and Steel, was awarded the Pulitzer Prize.

A CONVERSATION WITH JARED DIAMOND
Q. What inspired you to write this book? Was there a single “germ” or eureka! moment? Did you conceive of Collapse and Guns, Germs, and Steel as companion volumes from the start—or did the idea for Collapse surface only after Guns was finished?

A. Ever since I was in my 20s and read Thor Heyerdahl’s books about Easter Island, I became intrigued by the collapse of great societies—as are millions of other people. That interest has stayed with me over the last forty years, stimulated by visits to Maya ruins and Anasazi sites and by reading about other collapsed societies. I did not conceive of Guns, Germs, and Steeland Collapse as companion volumes from the start, but I had already written some magazine articles about collapses in the 1980s, and the idea for Collapse was percolating below the surface. After finishing Guns, Germs, and Steel, as soon as I came to think about what would be the subject of my next book, the answer became obvious: Collapse!

Q. Both Guns, Germs, and Steel and Collapse are huge bestsellers—and yet both are fairly demanding books. Have you been surprised by their success? How do you account for it?

A. Was I surprised by their success?! All authors, including me, have fantasies of achieving great success. However, by the time that I published Collapse, I had already published three previous books for the public to douse my fantasies with the cold water of reality. Hence I really was surprised that Collapse jumped to near the top of the New York Times bestseller list within a few days of its release. The explanation is partly that many people who had already read my previous book Guns, Germs, and Steel were looking out for my next book, but the other reason is that the subject of Collapse really grabs people. Most Americans today are troubled about our future and that of the world, and are concerned that we might be (or already are) heading downhill.

Q. If you suddenly found yourself with the power and the means to change one thing in the world today, what would it be? Which country or region would you choose to focus on?

A. If I had the power and means to change only one thing of the world today, that one thing would be my being limited to change only one thing in the world today: my one change would be to give myself the power to make many changes. That’s because, as I discuss in the last chapter of Collapse, we face a dozen different major problems, all of which we must succeed in solving, and any one of which alone could do us in even if we solved the other eleven.

Q. The scope and the breadth of Collapse is immense, encompassing history, geography, politics, economics, environmental history, biography, even baseball. Did you have any models that inspired you—other books you admire that synthesize strands from so many different disciplines?

Q.Together Guns, Germs, and Steel and Collapse complete an arc, a vast circle describing the rise and fall of world civilizations. What’s next? What’s left? Do you plan to strike out in an entirely new direction?

A. Yes, there is something next, another big book about another big question of human history and human societies. I hope to complete that new book in about another five years. But, as Conan Doyle let Sherlock Holmes explain to Dr. Watson in alluding to the mystery of the giant rat of Sumatra, “The world is not yet ready for this story.”

Q. Some critics have compared Collapse with Paul Ehrlich’s The Population Bomb, pointing out that Ehrlich’s predictions have not come true. How would you answer the criticism that you are being too dire? How politically motivated do you think your critics are? Do you think some critics are indulging in the sort of willed blindness or wishful thinking that contributed to the collapse of prior civilizations?

A. Many of Paul Ehrlich’s predictions have come true, but his critics cite only some that did not come true. All of us know that we live our personal lives in an uncertain world, where we have to make the best predictions that we can, in full knowledge that some of our best guesses will prove wrong. It is impossible to live without continually making best guesses about the future. Any critic who cites only a wrong prediction by Paul Ehrlich and not his correct predictions, or who fails to cite the incorrect predictions of Ehrlich’s critics, is employing bad reasoning.

Q. Have any of the criticisms of the book caused you to rethink aspects of your argument?

A. Details, yes; main thrusts of my argument, no.

Q. You write of the Norse in Greenland, “to them . . . it was out of the question to invest less in churches, to imitate or intermarry with the Inuit, and thereby to face an eternity in Hell just in order to survive another winter on Earth” (p. 247). Yet even today, religion guides the lives and choices of many Americans. There are many who prefer, metaphorically if not literally, to starve rather than face an eternity in Hell. Is this likely to become as serious a problem for us as it was for the Norse in Greenland? Do you think there is a fundamental clash between religious values and material survival running through Western civilizations?

A. This already is a serious problem for us. But that’s not to say that religion is a negative force and an obstacle to be survived. Religion, like other powerful human motivations and values, can be a force for either the good or the bad.

Q.You make a distinction between top-down and bottom-up approaches to environmental problems and discuss how both have worked, sometimes alone, sometimes together, in past cultures. What about our own society? Do you think our progress in environmental issues, to the extent we have made any, is essentially bottom up, top down, or a combination of the two?

A. It’s obvious that our progress in resolving environmental issues has been a mixture of bottom-up and top-down. Things that each of us do as individuals (recycling, saving water, buying a more fuel-efficient car), plus efforts of local groups of people such as the Teller Wildlife Refuge in Montana’s Bitterroot Valley that I discuss in Chapter 1, are examples of bottom-up progress. The improvement in air quality in the United States in the last thirty years because of federal government standards and policies is an example of top-down progress.

Q.You write about your fondness and sense of connection to Australia, New Guinea, and Montana. Did you visit all of the regions discussed in the book? How many years did you spend traveling and researching? Of all the places you visited in the course of your research, which moved you the most? Which frightened you the most?

A. I visited most of the regions: all except the Pitcairn Islands, Rwanda, and China. I worked on this book for six years and worked especially intensely on it for the last two and a half years. All of the places that I visited moved me, and all of them frightened me.

Learn More About Collapse
print
Back to Top