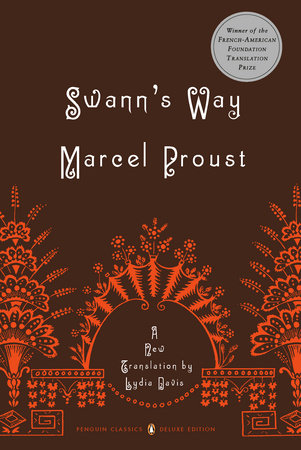 In his achievement as a novelist, Marcel Proust stands alone. Swann’s Way is one of seven books that comprise In Search of Lost Time (A la recherche du temps perdu, 1913-1927), unique in fiction for its sustained fullness of thought and richness of characterization. Though In Search of Lost Time is saturated with details of French bourgeois and aristocratic life at the turn of the century, it retains its freshness for readers today because Proust’s concerns—the meaning of love and time, as understood through an individual’s memories—are always relevant. The novel is encyclopedic: its chief themes include the genesis of erotic attachment and jealousy, the growth of wisdom, and the dawning of artistic consciousness. What sets Proust’s work apart, however, is not his subject matter but his way of treating it. The unnamed first-person narrator’s story is laced with digressive explorations of the feelings and thoughts underlying even the smallest actions.

In Swann’s Way, the great arc of In Search of Lost Time begins with the narrator’s efforts to recapture and understand his past, efforts set in motion by the taste of a madeleine soaked in tea. The narrator’s thoughts about his own life lead him ineluctably to the past of Charles Swann, a family friend the narrator knew as a child. By remembering and imaginatively inhabiting Swann’s love affair with the coquette Odette, the narrator gains insight into his life and the nature of love itself.

The famous opening paragraphs of Swann’s Way, in which the narrator describes his habit of going to bed early as a child, typify Proust’s ability to mine insight from apparently insignificant events. As the narrator attempts to understand the workings of his own consciousness as he falls asleep reading, he makes comparisons and creates images that give body and force to his philosophizing. The narrator observes, “I had not ceased while sleeping to form reflections on what I had just read . . . it seemed to me that I myself was what the book was talking about: a church, a quartet, the rivalry between François I and Charles V” (p. 3). Wakening further, he feels “the subject of the book detached itself from me, I was free to apply myself to it or not” (p. 3). Here Proust’s portrayal of the complexity of consciousness centers on the mind trying to understand itself. Reading Swann’s Way, the reader may feel the same vertiginous sense of identification with the book that the narrator experiences while falling asleep.

The first section of the novel orients us to both Proust’s method and his subject. The narrator’s analytical subtlety in explaining what he feels and thinks while longing for his mother’s goodnight kiss prepares us for the novel’s emphasis on exploring mixed emotions and ideas. At the same time, the anguish the narrator experiences as a result of this seemingly simple event—he is sent to bed without a kiss from his mother—is a kind of prelude to the frequent disappointments and reversals of human love that form so much of the novel’s substance.

In looking back at his life, the narrator confronts the question of what exactly an individual’s identity consists of. As he tries to understand his life, he realizes that it is inseparable from the lives of others—his parents, his grandmother, the family’s servant Françoise, and family acquaintances, including Charles Swann. Of Swann, the narrator writes that he leads an existence away from the narrator’s house that the family does not dream of; the narrator remarks that “no doubt the Swann who was known at the same time to so many clubmen was quite different from the one created by my great-aunt” (p. 19). The narrator comes to understand that identity is not fixed and conferred by birth into a social caste, as his family imagines; rather, it is flexible, continually being reshaped. “Our social personality,” the narrator remarks, “is a creation of the minds of others” (p. 19). Swann’s Way explores this process but also goes beyond it to ask whether there is a core self which is not merely a creation of others’ minds. If there is such a self, the narrator suggests, it awakens in the presence of beauty that endures—for example, as when Swann feels the idealism he has abandoned resurfacing while he listens to Vinteuil’s sonata.

Paradoxically, the narrator discovers that, by sympathetically imagining the experiences of others, he can best begin to understand his own identity. Thus a crucial component of his own selfhood becomes intelligible to him through the story of Swann’s love for Odette, whom Swann meets around the time of the narrator’s birth. The narrator is drawn to Swann’s story because he recognizes in Swann a shared sensibility. As the narrator thinks about the grief of being sent to bed without a kiss, he tells us that, “as I learned later, a similar anguish was the torment of long years of his [Swann’s] life and no one, perhaps, could have understood me as well as he” (p. 30). In the same way, the narrator’s sensibility enables him to revisit in memory and better understand the scene of cruelty involving Vinteuil’s daughter that he witnesses as a child. Peering through a window as the daughter and her lesbian lover enact their contempt for the daughter’s dead father by what they say about his portrait, the young narrator is horrified by the daughter’s sadism. As an adult, however, he sees this sadism as foreign to the daughter, reasoning that she must feel “virtue, memory of the dead, and filial tenderness” or she would feel no “sacrilegious pleasure in profaning them” (p. 167-68).

Proust’s narrator is always striving to find the hidden springs of feeling and action, but the novel nevertheless leaves us with mysteries. Why is Swann so drawn to Odette, although he realizes that she is not “his type” and that the Verdurins’ social group is vain and shallow? Most mysterious of all, how does Swann come to marry Odette despite this realization? Musing on all that is not fully understandable in Swann’s love, the narrator faces the finally unknowable complexity of human nature. The narrator’s anguished desire for his mother’s closeness and his childhood attraction to Gilberte, Swann’s daughter, suggest the extent to which the narrator will be drawn into the same type of emotional turmoil that Swann has experienced. The story of Swann and Odette is satisfying on its own terms, but it is also a prelude to the narrator’s emotional relationships, which will be the chief subject of the remainder of In Search of Lost Time. By the end of Swann’s Way, it is evident that even the subtlest human understanding must be incomplete, and that understanding is not enough to safeguard us from folly. But by transmuting such folly into his novel, Proust illustrates the power of art to reveal to us “what richness, what variety, is hidden unbeknownst to us within that great unpenetrated and disheartening darkness of our soul which we take for emptiness and nothingness” (p. 363).

Marcel Proust was born in 1871 in Auteuil, a suburb of Paris, to the respected physician Adrien Proust and his wife, Jeanne (née Weil). Proust’s father was of French Catholic descent, while his mother came from a wealthy Jewish family. At the age of nine, Proust had an asthma attack, and he suffered from asthma for the rest of his life. He attended the Lycée Condorcet, where he did his first writing, for class magazines. He went on to do a year of military service and studied law and literature at the École des Sciences Politiques. During his time at school, he was strongly influenced by the philosopher Henri Bergson’s theories positing the world as dualistic (with a life force struggling against the material world) and time as a duration that is not divisible or measurable.

While at school, Proust became a visitor of various salons, including some of the most exclusive. His first published book was Les Plaisirs et les jours (1896), a collection of short stories. He worked on a novel, Jean Santeuil, from 1895 to 1899, but never finished it. Toward the end of this time, he became less active in social circles, partly due to his failing health and partly because of his involvement in the Dreyfus affair, in which the Jewish army officer Alfred Dreyfus was accused of spying and imprisoned unjustly. The affair deeply divided French society, and Proust petitioned for Dreyfus’s release and assisted his lawyer.

Proust began writing what would become his masterpiece, the heavily autobiographical In Search of Lost Time, after the deaths of his father in 1903 and his mother in 1905. Financial independence enabled him to devote more time to his writing. In 1907, he moved to a Paris apartment, where he had the bedroom lined with cork to muffle sound while he was writing. He rarely left home, giving up almost all social ties.

In 1909, he had an experience in which his memory was reactivated by a chance association, and this became the basis for his narrator’s all-important taste of madeleine. In creating his narrator’s persona, Proust transferred some of his own traits, including his homosexuality and Jewish background, to other characters, but critics have generally agreed that the novel as a whole embodies Proust’s conclusions about life.

Proust completed Swann’s Way in 1912; it was refused by two publishers before he published it at his own expense. During World War I (1914-1918), Proust revised his idea of the novel, which he had originally planned for three volumes, expanding it to seven. Proust died in Paris in 1922, before the last three books were published.

Andrei Makine, Dreams of My Russian Summers (1995)
In an effort to recapture and understand his past, this novel’s protagonist recounts the summers he spent with his Aunt Charlotte in Siberia, where her tales of the “France/Atlantis” of her childhood awaken his imagination and longing.

Thomas Mann, The Magic Mountain (1924)
The story of Hans Castorp and his experiences over seven years at a tuberculosis sanitarium in the Swiss Alps, Mann’s novel explores the roots of decadence in European society on the eve of World War I.

Anthony Powell, A Dance to the Music of Time (1951-75)
Spanning more than fifty years, the twelve novels in Powell’s sequence describe the life of Nicholas Jenkins and his upper-class circle in post-WWII England..

Virginia Woolf, The Waves (1931)
Woolf’s most poetic novel explores our experience of time by pairing interludes describing the cycles of the natural world with a series of interior monologues, spoken in rotation by each of the book’s six characters.

The Tsar of Love and Techno
Anthony Marra

The Noise of Time
Julian Barnes

Of Love and Other Demons
Gabriel García Márquez

The Other Language
Francesca Marciano