The Street of Crocodiles and Other Stories Reader’s Guide 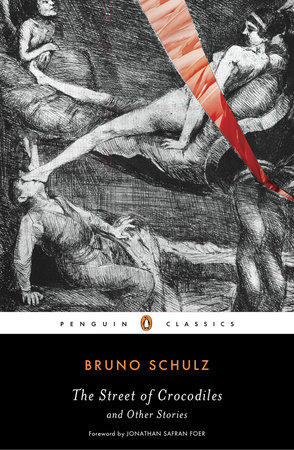 The Street of Crocodiles and Other Stories Reader’s Guide

print
The Street of Crocodiles and Other Stories Reader’s Guide

INTRODUCTION
In The Street of Crocodiles, Bruno Schulz’s collection of interlinked stories, the most prosaic elements of everyday life become fantastic, full of mystery, capable of containing and at times revealing the deepest secrets of existence. For example, as the narrator, his family, and the shop assistants sit down to lunch, “it was only when a dish appeared on the table containing two large fish in jelly lying side by side, head-to-tail, like a sign of the zodiac, that we recognized in them the coat of arms of that day, the calendar emblem of the nameless Tuesday: we shared it out quickly among ourselves, thankful that the day had at last achieved an identity” (p. 27). An article of clothing, a ray of light, wind, a cloud, a stray dog, a cockroach—any of these things can send the book’s narrator on the most lyrical, at times disorienting, flights of description, reminiscence, or metaphysical speculation. On the other hand, descriptions of incredible events, absurd landscapes, and bizarre animals make them seem matter-of-fact. When the narrator’s father, Jacob, begins to keep birds in the attic of their house, the narrator perceives a growing resemblance between his father and a particular condor: “I could not resist the impression, when looking at the sleeping condor, that I was in the presence of a mummy—a dried-out, shrunken mummy of my father. I believe that even my mother noticed this strange resemblance, although we never discussed the subject. It is significant that the condor used my father’s chamber pot” (p. 22). Once filtered through the narrator’s consciousness, the real and the unreal become indistinct from each other.

What accounts for the narrator’s leveling of different orders of experience? One way of answering this question is to note thatThe Street of Crocodiles is the product of the narrator’s memory, the operations of which can as easily be called invention as recollection (as seen in Proust, to whom Schulz is sometimes compared). Direct access to what really happened is impossible, which makes the question of what is believable irrelevant. But there is also the suggestion that the narrator’s mode of presenting the world of his childhood is a reaction to it. In the book’s first story, “August,” the narrator wishes that Emil, his exotic cousin, would notice him and liberate him from “the tortures of boredom” (p. 10). Whether the attention he gets from Emil has a desirable outcome is unclear. His cousin shows him a collection of pornographic photographs, and their effect on the narrator seems not entirely pleasurable.

The narrator frequently contrasts his boredom with various possibilities for relieving it, but these possibilities always possess ominous, if not dangerous, qualities. The tension between the safety of boredom and the potential for chaos lurking within its antidotes is most explicit in “The Comet.” The town becomes convinced that a comet is about to obliterate the earth. But, instead of inspiring fear, the prediction is cause for celebration: “Something festive had entered our lives, an eager enthusiasm. An importance permeated our gestures and swelled our chests with cosmic sighs” (p. 106). When the disaster fails to materialize, the narrator observes that the people were “richer by one more disappointment” (p. 111). How can a disappointment enrich them? Might it be that what actually happens in this provincial place could never be as exciting as what its inhabitants are capable of imagining? Schulz does not, however, depict the products of imagination as necessarily benign and therefore unquestionably preferable to the daily reality.

Throughout the book, the father seems to function as a counterweight to the boredom that oppresses the narrator. Looking back on the period when his father kept birds in the attic, the narrator notes that the “affair of the birds was the last colorful and splendid counteroffensive of fantasy which my father, that incorrigible improviser, that fencing master of imagination, had led against the trenches and defenseworks of a sterile and empty winter” (p. 25). Standing against this counteroffensive is Adela, the family’s servant, who chases the birds from the attic in a “dance of destruction” that renders the father “an exiled king who had lost his throne and his kingdom” (p. 23). The rest of the family wonders if she’s been given “some commission and assignment from forces of a higher order” (p. 25).

The Treatise on Tailors’ Dummies that Jacob recites (in “Tailors’ Dummies”) can be read as an explanation of the aesthetic philosophy at the heart of Schulz’s method. “The whole of matter,” Jacob proclaims, “pulsates with infinite possibilities that send dull shivers through it. Waiting for the life-giving breath of the spirit, it is endlessly in motion. It entices us with a thousand sweet, soft, round shapes which it blindly dreams up within itself. . . . Anyone can mold it and shape it; it obeys everybody. All attempts at organizing matter are transient and temporary, easy to reverse and to dissolve” (p. 31). The narrator seems to treat the substance of his memories as his father here describes matter. Near the beginning of “The Gale,” the narrator tells us that “one night the regiments of saucepans and bottles rose under the empty roofs and marched in a great bulging mass against the city” (p. 77). It is difficult to make sense of this until, several paragraphs later, we learn that a fierce wind is blowing through the town, and we realize that what he has been recounting is what the wind initiated in his imagination.

As the stories progress, it seems as if madness gradually overtakes Jacob, but it is a madness measured not so much in how he perceives the world as in how radically isolated from it he becomes. In “Visitation,” the narrator recalls that “we did not count him as one of us anymore, so very remote had he become from everything that was human and real” (p. 17). In “Cinnamon Shops,” the narrator says his father “was already lost, sold and surrendered to the other sphere” (p. 53). The narrator tells us that he now understands his father as a “lonely hero who alone had waged war against the fathomless, elemental boredom that strangled the city” (p. 25). Is Jacob’s isolation the cost he pays for saving his family? If so, does the narrator believe the price is fair? suggests that our individuality, if given full expression, fulfills the somewhat contrary ends of giving shape and color to an otherwise dreary world while separating us from those with whom we would share the pleasures to be found in a world so completely alive.

Born in 1892 in Drohobycz—then part of the Austro-Hungarian Empire and now part of Ukraine—Bruno Schulz is considered one of the greatest prose writers of twentieth-century Poland. He started drawing as a young child, and he studied architecture before his schooling was interrupted by illness and the outbreak of World War I. Schulz intended to have a career in graphics, but could only earn a living by teaching high school art. Apart from his work, his interaction with others consisted almost entirely of exchanging letters. Many of the stories in Schulz’s first book, Cinnamon Shops (1934, retitled The Street of Crocodiles in its American edition), began as letters to a poet friend in Lviv, Debora Vogel. Introduced to Zofia Nalkowska, a prominent novelist in Warsaw, Schulz later sent her his stories, and her support facilitated their publication. Schulz wrote that “these ‘stories’ are true; they represent my style of living, my particular lot. The dominant feature of that lot is a profound solitude, a withdrawal from the cares of daily life.” In addition to translating Franz Kafka’s The Trial, Schulz published a second collection of stories, Sanatorium Under the Sign of the Hourglass (1937), which is included in this Penguin Classics edition.

When the Germans seized Drohobycz in 1941, Schulz was forced from his home and into the Jewish ghetto. He distributed his unpublished writing, along with drawings, prints, and paintings, among non-Jewish friends for safekeeping—these were rumored to include the manuscript of a novel called The Messiah. A Nazi officer took an interest in Schulz’s art, serving as a kind of protector and commissioning a set of murals for his son’s bedroom. (When the murals were discovered in 2001, officials from Yad Vashem, the Holocaust museum in Jerusalem, ignited a controversy by removing them without permission.) In 1942, Schulz was shot and killed by another Nazi officer, supposedly an enemy of his protector. None of the work Schulz is thought to have left with others has ever surfaced.

Learn More About The Street of Crocodiles and Other Stories
print

Exile and the Kingdom
Albert Camus

A Rose for Emily and Other Stories
William Faulkner

The Loneliness of the Long-Distance Runner
Alan Sillitoe