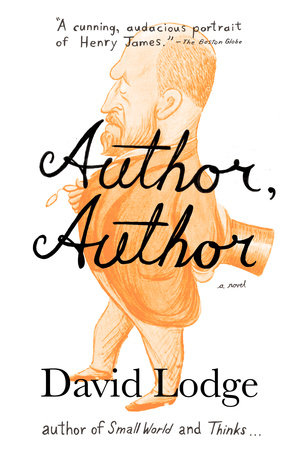 INTRODUCTION
Author, Author, David Lodge’s brilliant fictional portrait of Henry James, begins on James’s deathbed as the exhausted and disoriented author is about to be awarded Britain’s highest civilian honor, the Order of Merit. It is a moment of late triumph after a long career punctuated by many disappointments, the most devastating of which was James’s ill-fated attempt to “conquer” the English stage. That failure—and the competitiveness and desire for fame and money that led James to attempt it—becomes the central drama of Author, Author.

Reflecting on his books’ meager sales (the print run for The Aspern Papers was a mere 850 copies), James feels his ambition to be “the rightful successor” to Dickens, Thackeray, and George Eliot—writers who achieved both critical acclaim and wide popular audiences—slipping beyond his reach. He resolves to find success in the theater. “For all its vulgarity and aesthetic crudity, it was for an author the shortest road to fame and fortune—if, of course, one were successful. But why shouldn’t he succeed?” The novel offers an unflinching exploration of James’s failure and the reasons for it, and it is the sight of a great author shouted down by a vulgar audience that proves the most painful and poignant moment in the novel and, most likely, in James’s career. After submitting the beauty and subtlety of his writing to the practical demands of the stage, with its endless delays, maddening rounds of revisions, unreliable producers, and fickle audiences bred on farces and crude entertainments, James’s hopes for fame and fortune met with crushing disappointment. But he emerges from the fiasco chastened and determined both to overcome his envy of more successful writers, like his friend George du Maurier, and to rededicate himself to fiction.

Author, Author, however, is very much more than simply a re-creation of James’s failure in the theater. It gives us deeper sense of the man himself, the nature of his consciousness, the depth of his friendships and family life, and the passion and integrity of his creative process. James was famously protective of his private life, burning most of his letters and urging the American novelist Constance Fenimore Woolson, with whom he had a complicated and intimate relationship, to do the same. But David Lodge manages the remarkable feat of revealing James’s personal life without violating it and honoring the enduring success of James’s work while chronicling its failures during his lifetime.

David Lodge is the author of eleven novels and a novella, including Changing Places, Small World(shortlisted for the Booker Prize), Nice Work (also shortlisted for the Booker Prize), Paradise News, Therapy, and Thinks. . . . He is also the author of many works of literary criticism, including The Art of Fiction, The Practice of Writing, and Consciousness and the Novel: Connected Essays. He lives in Birmingham, England.

A CONVERSATION WITH DAVID LODGE

Henry James was clearly a writer who wanted to keep his personal life private. Did you feel any hesitation in writing a novel about him?

In spite of HJ’s efforts to frustrate would-be biographers by “destroying the evidence,” a great deal is known about his life. Most of his own letters to others have survived, and there are many memoirs of him. The main hesitation I felt was about making use of this enormous body of data without being overwhelmed by it. I always intended to write a sympathetic portrait of the writer, so I didn’t feel any qualms of conscience about posthumously invading his privacy by imagining what he thought and felt at various well-documented moments in his life.

Has James been a major influence on your own work?

I can think of several other writers who have had far greater influence, like James Joyce, Graham Greene, and Evelyn Waugh, because I read them enthusiastically when I was young and impressionable. I didn’t really enjoy and appreciate James until I became an academic and started to teach him and write criticism about him. Then I developed an enormous admiration for his stylistic virtuosity and subtle handling of the “point of view” from which a story is told. Perhaps my interest in Anglo-American relations as subject matter for fiction was subliminally encouraged by his explorations of the international theme.

What are some of the problems inherent in writing a historical novel? How difficult is it to turn fact into fiction?

James himself disliked the historical novel as a form and maintained that a novelist could never recover the “old consciousness” of human beings in the past. But James’s age is not really very remote from ours. It is so well documented and so unchanged in many respects (most of the buildings that HJ lived in, for instance, are still standing, and some may be visited) that it is possible, after a certain amount of research, to re-create the world he knew with reasonable confidence. When I first thought of writing this novel I expected to invent a lot of events and characters, but as I got into it I decided that the known facts were quite interesting and dramatic enough, and the challenge was to do justice to them and organize them in a satisfying narrative structure.

How would you explain James’s failure to find a wide popular audience for his work during his lifetime?

Essentially he regarded the novel as a form of art, not of entertainment. In the late nineteenth century these two functions, which a writer like Dickens managed to combine, became incompatible. James was a pioneer of the modern, or “modernist,” novel-as-work-of-art, which is often obscure, ambiguous, light on plot, and heavy on symbolism and psychological analysis. The longer James went on writing, the more complex and innovative his work became, and the more difficult for ordinary readers—so they shunned him. What gained James a following after his death was the spread of higher education that trained people how to read and appreciate him and his successors in the same aesthetic tradition, like Joyce, Lawrence, Conrad, and Virginia Woolf.

Do you think James’s foray into the theater was a mistake?

Well, it was a mistake in practical, professional terms: He spent a huge amount of time writing plays most of which were never performed, made very little money from them, and was devastated by the humiliating failure of Guy Domville. However, there is a sense in which no experience is totally negative for a writer—however unpleasant, it can always be turned into something positive. The experience gave him insights into the emotions of disappointment, frustration, and failure; it also helped him develop the “scenic method” of his later fiction.

Do you feel closer to James, as a writer, now that you’ve written a novel about him? Has your relationship to his work changed because of the research you did for Author, Author?

I certainly feel I understand him much better as a human being as a result of steeping myself in the facts of his life, working out a calendar of key events in it, and trying to imagine how he felt and what he thought on various occasions. One of the things that attracted me to the subject was that I have had my own experience of starting to write for the theater (and also for TV and film) fairly late in my literary career and knew something about the seductions and the frustrations of this kind of work, so was able to empathize with James in this respect.

Could you elaborate on James’s declaration “Consciousness is my religion”? Why did James see consciousness as sacred? How did such a belief affect his writing?

Leon Edel in his great biography of Henry James refers to “the religion of consciousness,” putting the words inside quotation marks but without giving a specific source for them. I took the liberty of putting them into James’s mouth. “Consciousness” is certainly one of the key words of his criticism and ruminations about human nature. “Consciousness” to James was what “the soul” was in traditional theology: the ground of our being, the source of morality and identity, and the tenuous hope of a life after death.

How highly do you regard James’s plays?

I can’t say I have read any of them with a feeling that they ought to be performed or revived. They seem fatally trapped in a kind of dramaturgy that was already old-fashioned when James wrote them. The paradox is that his novels and tales have proved so well suited to dramatic adaptation and performance.

Do you think James made the right choice in remaining a bachelor all his life? Would his writing have suffered had he married?

My own judgment is that James’s sexuality was ambiguous to himself, and his libido rather low powered; that basically his sexual orientation was homosexual, but for moral and temperamental reasons he did not give it full physical expression and chose the life of a celibate bachelor. If these intuitions are correct, it would have been disastrous for him to marry.

How do you see Author, Author in relation to your other novels?

Generically, it’s a complete change of direction: a fact-based, historical novel about real people, ultimately elegiac in mood. All my other novels are fictional, or fictionalize certain experiences of my own life, and all deal with contemporary life, often comically or satirically. However, there is some continuity (there always is between an author’s books). Henry James is an invisible but important presence in my previous novel, Thinks. . . . The heroine Helen Reed is a novelist who wrote an unfinished thesis about Henry James and cites his work as a prime example of how literature gives a richer account of human consciousness than cognitive science. And I don’t actually think of my last few books as “comic novels.” They are serious novels that contain comedy—as is, I believe, Author, Author.

Tell Me One Thing
Deena Goldstone

Divorce Is in the Air
Gonzalo Torne

All the Anxious Girls on Earth
Zsuzsi Gartner

The Returns of Zionism
Gabriel Piterberg

Angels Beneath the Surface

The Words and the Land
Shlomo Sand